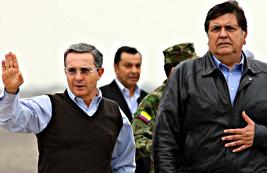 The commotion has shaken relations between the Andean countries: accusations between Peru and Bolivia, disputes between Ecuador and Colombia, and the eventual agreement between Lima and the EU behind the backs of the Andean Community of Nations. Chavez, meanwhile, has remained silent. The reason is simple: the growing tension between those seeking to establish Free Trade Treaties with the world and improve its economy and those who reject this ideal, says the author.

(From Madrid and Lima) MANY ANDEAN RULERS take advantage of the opportunity to engage in meaningless disputes which, although many refuse to see it, are almost always based on the desire to awaken an exaggerated nationalism that serves as a smokescreen against the true internal problems of national politics.

The second to last dispute occurred in the 1st week of June. Bolivian president Evo Morales [1] said that his Peruvian counterpart, Alan García [2], was fatter and a more imperialistic than when he served his first term (1985-1990). After that, the reaction came quickly.

“Morales accused the Peruvian president of wanting to destroy the Andean Community of Nations through his intention to modify the rules for implementing bilateral trade agreements” The foreign minister of Peru, José Antonio García Belaúnde [3], called the ambassador of Bolivia in Lima, Franz Solano, to express his resentment of President Morales’ statements. The Peruvian foreign minister also said that such indiscretions affect the relationship between the two governments and inhibit further development of the Andean Community of Nations [4] (CAN).

In addition to the insults, Morales accused the Peruvian president of wanting to destroy the Andean Community of Nations through his intention to modify the rules for implementing bilateral trade agreements.

García Belaúnde believed that Morales’ attacks on Peru would stop with a note of protest when the Bolivian president affirmed that the Peruvian authorities were dealt with by the CIA for requesting the extradition of former Bolivian governor Walter Chávez, a Peruvian by nationality, accused of being a member of the Peruvian terrorist group Túpac Amaru Revolutionary Movement [5] (MRTA).

THE SPECTATOR FROM CARACAS

These disagreements between Peru and Bolivia are added to the biggest misunderstanding in the Andean area of recent times: the Ecuadorian and Colombian governments have continued arguing since the 1st of last March, when the Colombian Army killed the former second in command of the FARC (Revolutionary Armed Forces of Colombia), alias Raúl Reyes [6]. “Curiously, after the last disputes, Chávez, who as we know is almost never silent, has remained comfortably in the position of spectator”

Rafael Correa [7], the president of Ecuador, has even taken a European tour to demand respect for the territorial sovereignty of his government. Álvaro Uribe [8], the Colombian president, stresses the information found in Reyes’ computer, which indicates that the FARC would have financed part of the presidential campaign of Correa.

Meanwhile, the Venezuelan president, Hugo Chávez [9], has been observing all this from Caracas. Curiously, after the last disputes, Chávez, who as we know is almost never silent, has remained comfortably in the position of spectator. This is unusual because, for many, Chávez and his policies constitute the source of profound disagreement.

THE TREATY OF DISCORD

The reason for the rift between Colombia and Ecuador is widely known, and although there are many reasons for Morales’ insults of his Peruvian counterpart, they are now at least based on something truly significant. “Alan García: ‘The EU contradicts its own principle of free trade by forcing countries to negotiate in blocks'”

…And that is that Alan García has called for the European Union (EU) to permit Peru to negotiate a free trade agreement with Brussels outside of the Andean Community of Nations.

Talks to reach this free trade agreement have carried on for years and recently have come to a virtual standstill due to the continuous delays and obstacles imposed by representatives from Bolivia, Venezuela, and Ecuador. Colombia and Peru bear the burden even though their economies and policies comply with requisites demanded by the EU.

“Commerce and the economy form the principle base for the differences in approach and ideology among the countries of the Andean region” On his visit to Madrid this past January, Alan García said forcefully for the first time: the EU contradicts its own principle of free trade by forcing countries to negotiate in blocks. We are forced to negotiate a free trade agreement with countries that do not believe in free trade, said García before the directors of the major Spanish companies.

“As in crime novels, we are left wondering who the culprit of all this nonsense may be” Commerce and the economy, without a doubt, form the principle base for the differences in approach and ideology among the countries of the Andean region–Venezuela, Bolivia and Ecuador on one side, Peru and Colombia on the other.

It is difficult to predict how the free trade agreement will end. What does seem clear is that the voices are getting louder and the Andean community will continue to feed off the disagreements. As in crime novels, we are left wondering who the culprit of all this nonsense may be.

In troubled times, there is always someone who benefits.