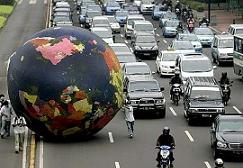 If a stop is not put to the effects of climate change, and if drought continues to grow in wide stretches of the globe, factors such as hunger, population displacement, imbalance and armed conflict will be intensified. The poorest countries will suffer the harshest consequences, the author says. In this respect, wealthy countries should face their responsibilities.

(From Madrid) IN THE YEAR 2007, climate change finally managed to come up in the global political agenda as one of the biggest problems facing humanity. This was reflected in the conclusions of the Intergovernmental Panel on Climate Change (IPCC). Its importance was also highlighted in granting the Nobel Peace Prize to the IPCC and former US vice-president Al Gore.

“The effects of climate change, together with socioeconomic and political problems, could aggravate already existing tensions and cause armed conflicts” Also, a dimension of the phenomenon which until now has been studied little has recently gained force and visibility: climate change as a possible source of tension and conflict. One example of this recent prominence is that last year, for the first time, the UN Security Council discussed climate change as a threat for peace and global security.

The effects of climate change threaten peace and stability in many parts of the world, especially in those which are experiencing national instability, weak government, economic problems, and instability. In combination with these socioeconomic and political problems, climate change could aggravate already existing tensions and possibly lead to an escalation of armed conflict.

“Changes in rainfall could cause depletion of crops and ultimately decrease the availability of food”According to the organization International Alert, 46 countries (where 2,700 million people live) are in clear danger of suffering violent conflicts. Fifty six other countries will also have serious problems managing the effects of this phenomenon, since it will only add to existing challenges.

The most effected regions will be Africa, central and south Asia, and certain parts of Latin America such as the Andean region. These are some of the poorest parts of the world.

“Desertification makes difficult coexistence between the sedentary agricultural populations and the nomadic shepherds who always shared resources”There are multiple ways in which climate change can generate tension and conflict. One of these ways is competition for increasingly scarce resources. The advance of desertification and changes in rainfall could cause depletion of crops and ultimately decrease the availability of food. 430 million people currently live with a water shortage, and all the predictions of the IPCC indicate that this number will rise.

An example of this could be the war in Darfur (Sudan), which has been described as the first conflict of climate change. Although interpretations explain it more often as a racial conflict between Arabs and Africans, the reality of the matter is more complex.

ANOTHER LAMENTABLE REASON FOR THE DISPLACEMENT OF PEOPLE

We must take into account the confrontation over land and water sources between sedentary farming populations and nomads who have traditionally shared resources but now have a more difficult time doing so due to desert encroachment.

“By the year 2050, there will be more refugees displaced by climate change than by conflict” Other elements that have contributed to the violence are the abandonment of the region by the government, the weakness of the state, the proliferation of Light weapons, and the intervention of external forces, among others.

Also, another factor in the instability could be large population movements. The way of life of hundreds of millions of people will be affected as a consequence of climate change. There have been predictable large population shifts within the country (through other rural zones or through cities) and across borders.

“The areas where weather conditions are favorable for the spread of diseases like Cholera or Malaria will increase” Both the UN and numerous NGOs have stated that, by the year 2050, there will be more refugees displaced by climate change than by conflict. This movement by itself need not generate instability, but it will if the resources in the place of arrival are scarce. This also creates friction with local communities. For example, in addition to the internal consequences, the conflict in Darfur has caused 300,000 people to flee to neighboring Chad. This has extended the conflict into this country and has served to expand the interethnic violence and confrontation between government and rebels. The result is that almost 200,000 people in Chad also have had to abandon their homes.

Public health could also be affected. “The issue of state fragility is important: coping with the impact of climate change will require resources, effectiveness, and legitimacy that many of these states lack”The areas where weather conditions are favorable for the spread of diseases like Cholera or Malaria will increase. This is serious because these diseases occur in countries that in many cases do not have enough medical resources to deal with such epidemics. The inaction of many countries in addressing these issues is one of the biggest factors undermining their legitimacy.

The countries that will be most affected will be those where these new conditions come to join the context of recent wars, political instability, poverty, inequality, and misrule.

The issue of state fragility is important: coping with the impact of climate change will require resources, effectiveness, and legitimacy that many of these states lack. In these cases, it is more likely that the citizens will feel unprotected and will break the social contract with the state, resorting to violence in search of a new way of life.

“Developed countries only have 15 percent of the global population and are the largest emitters of greenhouse gasses” Obviously, climate change is a severe problem, but it is not the sole source of conflict in the world. Last year there were 28 conflicts and 70 tense situations in the world. Every one of those has local roots and specific motivations, but can be commonly traced to state fragility, exclusion from globalization, etc. After all, there are also political motivations that probably will continue to exist in the future and it is necessary to bear in mind the origin and evolution of conflict. What climate change will do is exacerbate and expand tense situations, further jeopardizing effectiveness of the state and placing millions of people in a vulnerable situation.

THE RESPONSIBILITY OF WEALTHY COUNTRIES

An important issue that cannot be ignored is the extreme injustice that is involved in all of this. Developed countries only have 15 percent of the global population and are the largest emitters of greenhouse gasses (although China and India have now joined that number)

Faced with this, poorer counties and populations, which have contributed the least to the situation, will suffer the effects