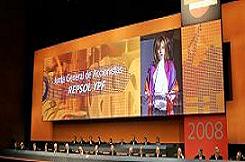 As companies are comprised of people, the focus of business should be on the human aspect, says the author. The company infrastructure, from the highest shareholder to the last employee, should develop, according to this conception, something more elevated and complete than a mere aim toward profit. To be truly ethical and balanced is the best business in our current global world. Find out why.

(From Madrid) THE SUBPRIME MORTGAGE CRISIS is causing different conclusions to be drawn in different parts of the business world. Already a veritable forest of explanations has sprung up in the media as reasons for this crisis: the excessive and inexplicable financial engineering; the lack of strict financial regulation; corrupt incentives and inequitable salaries; and an unmerited excess of confidence in some financial intermediaries (such as the agencies of qualification and rating). “Criticism of supersalaries had already been raised within Eurogroup for ethical reasons” All these begin to generate a nice vision of some kind of structural weakness within the current corporate business model.

The European Union has recently drawn attention to the salaries of top executives to expose their role in aggravating the international financial crisis. Eurogroup, which unites the economic finance ministers of the zone of the Euro, discussed in its last meeting the extent to which the remuneration of executives, depending on short-term benefits, can contribute to the adoption of excessive risk taking and the inequality of the financial system. Several European countries, like Germany and Holland, are preparing measures against multimillion bonuses and benefits.

Criticism of supersalaries had already been raised within Eurogroup for ethical reasons. “The workers see that while we propose that they be moderate, other players in the economy are enjoying unlimited increases”Last summer, Jean-Claude Juncker [1], the president of Eurogroup and prime minister of Luxembourg, brought up the need for a debate on income distribution by exposing the contradiction in proposals by economic and political leaders. he pointed out.

The president of Eurogroup thereby added to the point made by Jean-Claude Trichet, the president of the Central Bank of Europe, and the position of the European Parliament. Parliament has also expressed its concern over the policy of paying senior executives salaries that tend to grow disproportionately in relation to regular wages. Salaries like these give the wrong signal and support an irresponsible wage policy.

The contemporary business model, although it is experiencing changes, still suffers from an endemic change. “There also must exist a greater awareness of the implications of having to be immersed in a democratic system” Much of the responsibility for this change lies in the hands of many of the businesses that set global trends, but we should not forget the responsibility that public authorities, associations, and social movements should exercise.

Businesses are shaped by groups or teams of human beings and therefore the focus of business should be changed primarily with a strong understanding of what being human means. It is the responsibility of all, namely of all the organizational structure of the business, from the highest shareholder to the last employee, to develop this concept. It is something higher and more complete than the short-sighted vision that only gives preference to the company.

There also must exist a greater awareness of the implications of having to be immersed in a democratic system. “The youngest collectives must assume command of the active participation within the complex company web” We must move slowly and responsively, but with force, toward the democratization of professions that function within the company. Today, the model is too simple and the inequality in the terms of bargaining power of each of these positions has highly damaging collateral effects: high rates of absenteeism, increasingly unmotivated workers, and an alarming rise in psychosomatic disorders.

Despite all of this, new waves of hope are starting to appear on the horizon of Corporate Social Responsibility (CSR). “Despite these mediocre advances, there is a real danger that CSR will eventually be a profitable tool to legitimize business, but not a means to achieve change” Thus, the so-called shareholder activism (infiltrating the heart of the company to ensure that human, social, or environmental rights are not overlooked) is being consolidated in Spain and everything indicates that it will become common in big business.

In March of this year, the NGOs Setem and Justice and Peace interrupted the meeting of BBVA to point out bad investments in defense, as well as controversial projects in Latin America. Also, Isabel Tamarit of Intermon Oxfam presented her complaints about the actions of the Spanish multinational Repsol in Latin America at the last shareholders’ meeting.

However, despite these mediocre advances, there is a real danger that CSR will eventually be a profitable tool to legitimize business, but not a means to achieve change. The Observatory of Globalization Debt, affiliated with Polytechnic University of Catalonia, is more pessimistic. Its analysis returns to the taking of shareholder groups by NGOs. Rather, it would be big companies which would take the NGOs with snares of money for corporate social responsibility.