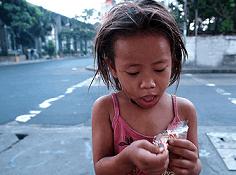 In a country where the basic costs of food and transportation are growing rapidly while employment opportunities remain low, begging is on the rise and remittances sent from abroad often provide a quality of life otherwise unattainable. Is this fostering a culture of mendicancy? What are the human costs of such a phenomenon?

(From Manila) YOU CAN SEE THEM EVERYWHERE. In the streets, on bridges, in front of convenience stores and on buses. In the Philippines, beggars are a common sight, and one that often evokes pity, especially the children. However, beggars can become a nuisance, poking and prodding to call attention to themselves.

Begging used to be a last resort. For older Filipino generations, there is too much pride at stake. But now mendicancy has become a way of life for some, and a substitute for official employment. Some beggars have gone to the lengths of developing intricate tactics and techniques. Gone are the days in which you might have seen a blind person playing guitar while appreciative spectators parted ways after leaving a few coins. Many beggars now resort to acting, and even use infants as props. There are those who pretend to be mute, and hand out pieces of paper asking for alms. Some tell stories that they need to buy medicine for hospitalized relatives. Also common are children suddenly appearing in between traffic stops to quickly clean the windshields of vehicles or climb inside public utility jeepneys [1] and wipe the shoes of passengers before asking for money.

Among ethnic tribes, the Igorots [2] used to travel to Manila during Yuletide season. With crude instruments at hand, they would go from house to house entertaining people with their traditional dance in hopes that people would be kind enough to give them some money. Later they were replaced by the Aetas [3], who began begging after the Mt. Pinatubo eruption in 1991 which displaced them from their homes. Nowadays the largest ethnic groups to have succumbed to mendicancy are the Badjaos [4] from Mindanao, also referred to as Samal and sea gypsies.

So, is there really a culture of mendicancy in the Philippines?

Evangelina Lawas, Head Social Worker at the Nayon ng Kabataan–Department of Social Welfare and Development [5] (DSWD), said that the problem is largely rooted in poverty and not so much in a culture of begging.

“Due to the sheer magnitude of the problem, the government’s power to influence the situation and to protect the innocent is limited” With around 30 percent of the population below the poverty line, and with very few employment opportunities, some people resort to desperate means to earn, and one easy way out is begging. What is appalling, Lawas said, is that some parents actually use their children –even babies– to beg in the streets, exposing them to accidents and other risks.

The law prohibits and penalizes mendicancy as well as the exploitation of children, which is tantamount to child abuse. However, for lack of funding and due to the sheer magnitude of the problem, the government’s power to influence the situation and to protect the innocent is limited.

Also, there are no beggars if there are no givers. But the Christian teaching of giving alms to the poor and needy, as well as the feeling of guilt at being able to afford luxury while others are going hungry, can be skillfully exploited by beggars.

However, rather than giving alms to beggars on the street, which will only encourage more poor to beg, Lawas emphasizes that any assistance would be better channeled through charitable institutions and organizations.

Fernando Kuehnel, a Filipino-American and a former street child himself, now living in the US, generously donates and volunteers time to raise funds for the Nayon ng Kabataan. “However, begging is just one of the more obvious forms of mendicancy” He even put up a web site, House of Kabataan, for the orphanage.

Kuehnel said he was rescued and brought by the DSWD at the Nayon and was later adopted by an American couple at age 13. He usually comes home to the Philippines to visit the orphanage and to share his blessings with other street children who are being cared for at the Nayon ng Kabataan, as a way of giving back.

I made a promise to God when I was 10 years old in the streets of Manila that if he got me out of this situation I would help other kids. I am fulfilling that promise now, he said. I do it because I know how these kids feel. I want to show them that someone cares.

“Politicians and bureaucrats are equally guilty of mendicancy, as they have become addicted to loan assistance from rich countries”However, begging is just one of the more obvious forms of mendicancy. There are less obvious forms which serve to perpetuate mendicancy, such as political patronage and the lagay system of bribery.

Film director and activist Behn Cervantes wrote that self-serving politicians have long realized that the have-nots are taught to believe they are dependent on the generosity of the haves, who take advantage of this by practicing a culture of patronage. Thus, they wield power over the have-nots through another Filipino phenomenon, the utang na loob or debt of gratitude.

“Around the world, over eight million Filipinos are sending billions of dollars back home” Lawas explained that it was during the long 20-year rule of the Marcos regime that such an attitude became deeply ingrained. On a national scale, she said, politicians and bureaucrats are equally guilty of mendicancy, as they have become addicted to loan assistance from rich countries and development agencies.

TV shows are also perpetuating another kind mendicancy, the dole-out mentality. Daytime game shows in particular send the wrong signals. The public pins its hopes on a game of chance and people learn to gamble money in hopes that luck will smile on them and alter their lives. When everything else fails, they head abroad, which fosters begging of yet another form.

Around the world, over eight million Filipinos are sending billions of dollars back home. “Lawas prefers to see the positive side of remittances: they help many families that otherwise would have gone hungry” They are throwing lifelines to poor families and keeping the Philippine economy afloat. The Philippines, along with Mexico and India, is the largest recipient of foreign exchange inflows from overseas workers, who mostly reside in the US, Saudi Arabia, Japan, Hong Kong, Singapore and United Arab Emirates.

On a general scale, the huge number of remittance sent by overseas workers fosters dependency. A study commissioned by the International Monetary Fund said that the inflow of money by workers abroad creates a moral hazard; there is danger that the recipient will become dependent on his or her working kin abroad. Instead of contributing to the family upkeep, some members, even those of the appropriate age, lose their incentive to work and begin to regard the money as a right.

Lawas, however, prefers to see the positive side of remittances, since they help many families that otherwise would have gone hungry.

With inflation worsening due to surging oil and food prices, expect more people to go abroad within the next couple of years. As it is, poor families without relatives working abroad might be the most desperate ones.