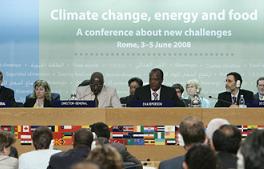 Is the glass half full or half empty? Despite criticisms, the recent meeting of the FAO in Rome reached various and important achievements, like the treatment of agriculture and food as principle themes in the international political agenda, next to energy and climate change, the author says. Secondly, more than 6,500 million dollars were raised in support of the cause.

(From Madrid and Rome) AS ALWAYS HAPPENS with issues under dispute, (as is the case with the discussion about how to solve the hunger problem) assessments that are made in meetings like the recent Food Summit in Rome [1] are extremely varied and often contradictory. Some say that it was a great success, yet others say that it was a complete failure because the meeting failed to produce solutions to the hunger problem.

Surely this is because one’s opinion depends on which crystal one is looking through. Therefore, my opinion is also derived from my own crystal. I am an officer of the FAO and have been for 30 years. I was at the summit in Rome, not as a spectator, but as a participant. Although I am part of the FAO, I am not what some would call a FAOist. I believe that I can look at the results of this summit with a certain objectivity of judgment and experience that my years as an active participant have given me.

These international meetings should be assessed based on the results they can offer and not as if they were a panacea for definitive solutions to all the problems of the world. With this said, I am inclined to think that better than expected results were obtained at this summit.

AFFIRMATIONS BASED ON THE UNKNOWN

Before praising its accomplishments, I think it is important to clear up some of the confusion that some of its critics have caused. It has been suggested that the FAO is an institution that has been unable to prevent what is happening or to clearly identify the causes of the crisis provoked by the increase in food prices. These are strong words, and words often based on ignorance. FAO has long been warning that cereal production has fallen short of consumption for 7 of the last 8 years. “Critics forget that UN organizations are intergovernmental organizations that express what their member states agree to by consensus, and that depend on meager budgets”

We have repeatedly made reference to the causes: the significant increase in demand, especially demand coming from emerging countries like China and India, and a shortage of supply due to climactic problems such as droughts, floods, hurricanes, irregularities in rainfall, and phenomena caused by climate change. Additionally, we have identified other short-term causes such as the rising oil prices which affect the food production process, the development of bio fuels, speculative financial movements on agricultural commodities, measures unilaterally adopted by some countries that restrict trade, and the habit of consumers (particularly in developed countries) to hoard food before the alleged threat comes to fruition.

Other critics have pointed to the unwillingness of international organizations to aid the social and economic development of poor countries. “It is naïve to think that a summit by itself can solve such a huge problem as hunger” These critics forget that UN organizations, including FAO, are intergovernmental organizations that express what their member states agree to by consensus, and that depend on meager budgets that do not allow interventions on the scale of what is really needed. Without going any further, the FAO budget in one year is 450 million dollars, a tiny crumb compared to what is spent each day on arms, for example.

There has also been the same old criticism: that there is much talk in the meetings and that at the end, the poor and hungry are left waiting. However, it is naïve to think that a summit by itself can solve such a huge problem as hunger.

Speaking in terms of achievement, I believe that the most valuable part of this meeting in Rome is that, “At a meeting that was not intended to solicit financial support, there were contributions of more than 6,500 million dollars” for the first time since the UN was founded 63 years ago, the topic of agriculture was finally brought up as the main topic of the international political agenda. This has undoubtedly contributed to the perception that food prices not only affect the poorest of the poor, but it also helps people in developed countries to see the threat. The best indicator that the issue is important is the amount of attendees that were at the meeting. There were representatives of 181 countries, 43 heads of state, over 3,000 national delegates, 60 international organizations, 64 agencies of civil society, and nearly 1,300 journalists.

Secondly, at a meeting that was not intended to solicit financial support, there were contributions of more than 6,500 million dollars. “Organizations of the UN system have already begun implementing measures and projects that combat hunger in specific countries” Some of these donations are fresh and immediate resources; others will be donated in increments over a period of five years. These contributions included 1,500 million from the Islamic Development Bank [2], 1,200 from the World Bank [3], 1,000 from the African Development Bank [4], 1,500 from France, 733 from Spain, and 590 from the UK. This new funding joins another 6,060 million dollars committed in the first few months of this year.

Thirdly, important international meetings will take place to follow those that took place in Rome: the meeting of the Group of 8 [5] in Tokyo from July 7-9 of this year, with the UN General Assembly starting in New York on September 20, and the meeting hosted by the government of Spain, to be held at a date to be determined in the fall. These meetings should articulate concrete steps to combat hunger.

A TASK FOR WHICH WE ALL ARE RESPONSIBLE

Sometimes there is a tendency to focus more on the disagreement over bio fuels and not the consensus reached on measures to increase the food supply. In this regard, it should be noted that the organizations of the UN system (including FAO) have already begun implementing measures and projects that combat hunger in specific countries.

The Summit Declaration [6], adopted with praise, called upon donors and the UN system to help enhance its assistance to developing countries. It suggested moving on two main goals: bringing immediate food and aid for those who suffer the most hunger, and giving aid to agricultural production and trade by asking developing countries to implement policies and measures to assist the family farming sector to increase its production and integrate with local, regional, and international markets.

However, if we really want to solve the hunger problem, we must heed the words of FAO general director Jacques Diouf [7], who said at the summit that every year, 30,000 million dollars are needed to invest in agriculture to produce the food that is needed. This money should come from the countries that are themselves affected by food and safety issues as well as from highly developed countries. The first priority must be agriculture, and the second must be to increase current levels of aid promoting development.