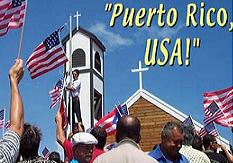 With 4 million Puerto Ricans on the island, and another 4 million in the United States, Puerto Rico is experiencing an unusual situation that many wish to change. Supporters of statehood and those affiliated with the Commonwealth are beginning to see a new tendency, which, while not exactly pushing for independence, leans toward Washington.

(From Madrid) THE CELEBRATION OF THE DEMOCRATIC PRIMARIES brought the unusual political position of Puerto Rico into focus.

A Spanish colony until 1890, the island fell under US control, becoming a commonwealth in the fifties of the last century.

One hundred and ten years after shifting from Spanish to American rule, some things indicate that something is changing in the Caribbean island. And that this something is not playing in favor of independence, but quite the contrary.

“The island’s anachronistic statute (undoubtedly colonial) may be reviewed in the near future” With four million Puerto Ricans on the island and another four million in the United States, Puerto Rico is experiencing quite an unusual situation; a situation that many would like to change.

Supporters of statehood –of the New Progressive Party [1] (NPP)– and supporters of the commonwealth –those affiliated with the Popular Democratic Party [2] (PDP)– are beginning to see a balance of power different from the ‘80s, which suggests that people are developing a new and distinct preference in the history of the island.

Puerto Rico participated in the Democratic primaries, where Hillary Clinton won with 68 percent of the vote on a day in which only 387,000 citizens voted (representing 16 percent of those registered). They chose between Clinton and Obama, but they will not vote in the US general elections come November. “According to CNN, 60 percent of voters would prefer statehood”

They have participated in Washington’s wars (Vietnam, Iraq, Afghanistan), but they have never been able to vote for them.

This anachronistic statute (undoubtedly colonial) may be reviewed in the near future.

As Puerto Rico was the only colony of the Spanish Empire that did not proclaim its independence, one would tend to think that this would be the next chapter in its history. But this is not the case: Puerto Rico seems to march toward statehood.

CNN broadcast a survey revealing that 60 percent of voters would prefer statehood for Puerto Rico, a percentage that the local papers —The Voice of Puerto Rico and The New Day — reduced to 57 percent. But this is a historical first: it is possible that for the first time, Puerto Rico could become the 51st state in the Union.

“Everything suggests that Puerto Rico will become a full-fledged State of the Union” If since the ‘80s the votes that advocated statehood never rose above 46 percent, now they have grown between 11 and 14 percentage points. Luis Fortuño [3] (candidate for the PNP and supporter of statehood) has a support that surveys have estimated at around 64 percent.

His electoral victory in the next elections could change the history of Puerto Rico, putting to an end a century as a US colony and several centuries as a Spanish colony, to join the Union as a state.

PARTNERSHIP WITH THE US GUARANTEES PROTECTION AGAINST DICTATORSHIP

“When we think of the unusual association of Puerto Rico with the destiny of the Union, that it has been freed from suffering dictatorships, one sees that the citizens of the island have not had it half bad” As a member of the Spanish-speaking community, one would tend to think that Puerto Rico has a pending date with history, and that it should move toward independence.

But historical processes do not obey the wishes of those who write about them; they simply present the outcome of history, leaving us to adapt to it.

Everything suggests that Puerto Rico will become a full-fledged State of the Union.

And perhaps this is not the worst thing that could happen. When we think of the unusual association of Puerto Rico with the destiny of the Union (as a commonwealth), that it has been freed from suffering dictatorships like those of Duvalier [4], Batista [5], Fidel Castro [6], Somoza [7], and others, one sees that the citizens of the island have not had it half bad.

THE DECISION IS IN THE HANDS OF PUERTO RICANS

Eugenio Maria de Hostos (1839-1903), who was outraged when he heard that the US had invaded his homeland (he was in route to meet President McKinley with other Puerto Rican patriots at the same time that the US navy occupied Puerto Rico), probably would not agree with this outcome, but he would have to accept the argument that was once given: exercising our right as accidental citizens of the American Union who cannot be compelled against our will to be or not to be what we do not want to be, we will go to referendum.

If Luis Fortuño becomes the new Governor, probably we will have news of this pleibiscite.