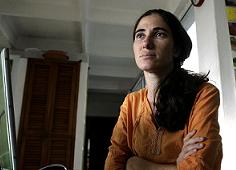 The Cuban regime, despite the few restrictions that have been lifted by President Raul Castro, remains in violation of the rights of its citizens, says the author. However, bloggers and freelance journalists like Yoani Sanchez, 33, embody a new generation of observers without biases. One should know who they are and what they think of the state of things in Cuba.

(From Montevideo) THE CUBAN REGIME, despite the few restrictions that have been lifted by President Raúl Castro, remains in violation of the rights of its citizens.

The Inter-American Commission on Human Rights, part of the Organization of the American States (OAS), said in its last report that restrictions on political rights, liberty of expression, dissemination of ideas, and the lack of elections as well as judiciary independence, makes for a state of permanent violation of human rights in Cuba.

Journalists and the press have been a rock in the shoe of the Cuban regime, as they are for all dictatorships and governments where democracy is narrowly defined or does not exist. Reports and statements from Reporters without Borders, the Inter-American Press Association, the Amnesty International Committee for the Defence of Journalists, the World Newspaper Association, and UNESCO director Koishiro Matsuura, among other social and political institutions, have all condemned Cuba’s disregard for human rights.

Freedom of the press is undoubtedly one of the fundamental pillars of democracy. Its defence must be left unimpeded by all and for all. To not defend it is to be an accomplice of authoritarian ideals.

Five years ago, Cuba experienced what was called Black Spring. Dozens of opponents of the regime were imprisoned with lengthy sentences for peacefully dissenting. Among those dissenting were several freelance journalists.

“The nearly 11 million inhabitants of the island must get their news from the official press” However, as world history has shown, it is impossible to restrain or control the development of society by repression. Today, independent journalists have multiplied and have become real actors in informing those outside of Cuba of some of the events happening within the country. They do this despite the harassment which prevents them from disseminating information among Cubans, whom they would like to be able to reach first and foremost.

Around 11 million inhabitants of the island only have the official press as their source of information. Here the speech and propaganda of the regime are constant, despite the light that is beginning to shine at the end of the tunnel.

THE MESSENGERS PAY THE PRICE

In the ‘90s, after the fall of the Soviet socialist regime, countless news agencies brought together journalists who came from the official media, and improvised communicators who took it as their mission to inform citizens of what the official Cuban press didn’t say. They did this with the help of exiles in the US, Europe, and several NGOs, and they did it in a country where the state possesses a monopoly on information, printing, and circulation.

Requisition of work resources, layoffs in a country where the state is the only employer, telephone cuts, exile, arrests, and prison sentences are the consequences that these communicators are playing.

Cuba Press, founded by the poet and journalist Raúl Rivero –finally released in 2004 and exiled to Spain the following year– is a shining example of the work of Cubans and civil society in favour of independent reporting, despite law 88, known at the time of its enactment in March 1999 as the gag rule.

THE HOPE OF A NEW GENERATION

This law created a climate of fear and uncertainty and was specially designed for freelance journalism and extended to the peaceful opposition. A journalist can go to prison for 20 years for collaborating with or reporting to the foreign press. Today, five years after the so called Black Spring, journalists have broken through and joined the task of informing other chroniclers of every day life in Cuba. Yoani Sánchez, 32, embodies this new generation of journalists and careful, unbiased observers like the ones who lived before the Castro brothers took power.

With her blog, Generation Y [1], this philologist manages to make known the facts that are hiding behind the Cuban government’s official version of them, “A journalist can go to prison for 20 years for collaborating with the foreign press”despite the restrictions that the majority of Cubans suffer in attempting to access the internet here in the 21st century, or in reading information that the regime has blocked. Cubans are allowed to access an internet called intranet, which is strictly controlled by the government.

Cubans are largely excluded from internet access because it is so restricted and expensive. This is something that the Cuban government intends to perpetuate when in international forums it proposes the authorization of internet use as something controlled only by the domestic legislation of each country. In other words, the Cuban government wants the UN to give its seal of approval to the countries that set up internet filters or that decide which of their citizens can have access to the Web.

Time magazine included Sánchez as one of its 100 most influential people in the World. Her blog has attracted many with its commentary on life on the Caribbean island and has provoked frequent criticisms of the communist government.

Through her blog, she writes in first person from her personal experience. She discovered the power of blogs, as well as the extremely thin line between journalism and political opposition, through the work of Chinese and Morrocan dissenters. Many of the opposition are journalists, and all independent journalists are syndicated as members of the opposition, under accusations of being agents of the CIA, mercenaries, enemies and counter-revolutionaries. Key words in the liturgy of the Cuban government in sentencing those who dissent.

It is just one more way of letting us know that we are like little children that need the permission of our parents to go outside, said the blogger. Upon announcing the awarding of its national prize in the category of digital journalism, the paper El País said that it recognized the perspicacity with which Sanchez’s work has drawn attention to the limitations on freedom of expression that exist in Cuba, her lively style of information, and the impetus that she has represented for the global circle of citizen journalism.

For Cuban writers Zoe Valdés and Raúl Rivero, this case shows that Raúl Castro’s recent reforms are not necessary.

I don’t think that there has been any reform on the part of Raúl Castro; to call this a reform shows a lack of respect for the Cuban people, said Valdés during a presentation of her latest book, La Ficción Fidel, in the Casa de America [2] in Madrid. The most important thing is that Yoani will continue and will have the courage that she has always had, argued Valdés.

“Raúl Castro tries to advance his agenda in the media with calibrated steps to prepare for the questions of the official press on the solution of economic and social problems” You can’t talk about any special change while you have 230 or more political prisoners, while politics are still not democratic, but restricted, and when you’ve just prevented Yoani Sánchez from going out and receiving the Ortega y Gasset prize, said Raúl Rivero, a Cuban poet who currently resides in Spain.

According to a report from the InterAmerican Press Society, Raúl Castro tries to advance his agenda in the media with calibrated steps to prepare for the questions of the official press on the solution of economic and social problems, the opening of correspondence spaces for readers, and the liberalization of domestic electrical appliances and computers. However, as was said by Ernest Hernández Busto, the essayist and friend of Yoani Sanchez, who received the award on her behalf, political and individual liberties are being severely restricted.

Back in 1995, when small news agencies began to pop up, they were immediately persecuted by the police of the regime, but not without fracturing the totalitarian model of communication.

BORN UNDER THE CASTRO REGIME

The first of these arrived in small groups and came from other sectors of society besides journalism. These included doctors, economists, professors, and students. “If there is no liberty of the press to inform and debate, if there is no access to the media, then human rights are being violated” They received very little help from experienced journalists. This was the first school of independent or freelance journalism.

A new generation, in an emerging civil society, is taking the baton to seek the transition to a full democracy. And it will undoubtedly come.

These new networks, formed by young people who have known nothing other than the regime of the Castro brothers, are, thanks to new technologies, trying to develop an alternative press to reach their fellow citizens.

So far, the government has made half-hearted changes in its economic governance. Will an opportunity be provided for liberty of expression and information? Will imprisoned freelance journalists be liberated? This will depend on whether Cuba transitions into a multi-party democracy where all citizens indiscriminately have room to be free.

The government, which boasts of the support that it has among the people, should not fear words.

If there is no liberty of the press to inform and debate, if there is no access to the media, then human rights are being violated, and the mentioned reforms that the current regime wants to pursue will remain incomplete, and Cubans will suffer the consequences.