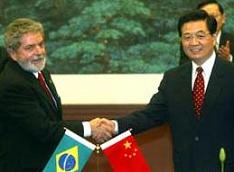 The diplomacy –especially in relation to economics– that China is implementing in Latin America will alter the region’s foreign economic relations at an accelerated pace, along with the geopolitical axes that had appeared immutable up until today. Meanwhile, the image of the United States and the European Union remains unchanged.

(From Beijing) THE DIPLOMACY, ESPECIALLY WITH REGARDS to the economy, that China is implementing in Latin America is altering the region’s foreign economic relations at at an accelerated pace and, along with this, is perhaps laying the groundwork for a subsequent modification of some geopolitical axes that might seem immutable today.

In parallel, while the image of the United States in the region is not improving and that of the European Union continues to be tarnished, China, which still marks a clear distinction between its domestic (in general terms: unacceptable) and foreign “Beijing’s strategy has two key points: the diplomatic recognition of Taiwan and access to raw materials” (considered to be of interest) political models, is as a whole seen in a positive light, by governments as much as by ample sectors of the public.

However, the moderation that generally prevails in China’s rapprochement with the Latin American region-standing in stark contrast to its strategy in Africa-the intensification of trade ties, the growing presence of its cultural diplomacy (especially through the promotion of the Confucian Institute) and its lack of involvement in matters pertaining to security, contribute to China being viewed as a desirable partner by many of the region’s Departments of State.

THE VALUE OF THE CHINESE MARKET

It is well known that Beijing’s strategic agenda has two key points: the diplomatic recognition of Taiwan and access to raw materials. In addressing both issues, China has been cautious to avoid any behavior that could be construed as defiant, “For Latin American countries, their relationship with China reduces dependency on other partners and allows for greater autonomy in their foreign policy” not only with respect to Latin America, but also in regards to its relationship with Washington.

These steps are allowing China to win influence and respect, even though Latin America is not among China’s top priorities –which are essentially Asia and the United States– and there is a certain disappointment in the hearts of some governments that had had high (and perhaps unfounded) hopes for a Far East investment boom.

For Latin American countries, this relationship with China reduces dependency on other partners and allows for greater autonomy in their foreign policy. This diversification is seen as a positive thing.

GROWING RELATIONSHIPS: THE CASE OF BRAZIL

Cooperative relationships have not stopped growing. There is a continuous exchange of visits by high-ranking officials, which are establishing ever more relevant foundations for dialog. For his part, He Guoqiang, member of the Standing Committee of the Political Bureau of the Communist Party of China and the man responsible for fighting corruption, has visited Cuba, “In 2007, bilateral trade between China and Brazil reached 29.71 billion dollars, a jump of 46.4% from 2006” Trinidad and Tobago, and Brazil, which is his most important place of interest in the region.

These high-level meetings, which involve both state diplomacy and paradiplomacy, foster and maintain greater political harmony as progressive advances in the field of economic exchange are made.

The relationship between China and Brazil provides a clear example. In 2007, bilateral trade reached 29.71 billion dollars, which was a jump of 46.4% from 2006.

China is Brazil’s second largest trading partner, behind the United States but ahead of Argentina. The aeronautics company Embraer is already producing its first models of the ERJ 145 in Harbin, which is in the northern province of Heilongjiang. Technological cooperation, in bio-energy and satellites, is also important. In regard to politics, this relationship with China adds to Brazil’s clout in the international arena.

COMMERCIAL BONDS WITH A POLITICAL FUTURE

“For China, Latin America continues to be a distant continent, and it must remain prudent throughout its rapprochement lest its actions be subject to any unfavorable interpretation by Washington” As part of the preparation for the 4th Latin America and Asia Pacific International Solidarity Forum, which will be held in Chile next October, the Reflection Group, led by Mexico, argued for the importance of developing coordinated strategies regarding Asia, and especially with China.

Inaugurated on June 25th in Panama (with whom China’s trade has intensified despite the absence of diplomatic relations: 5.058 billion dollars in 2007 as opposed to 4.8 billion in 2006, double its trade with Cuba), this meeting has served to demonstrate the growing reciprocal significance of these relationships.

Pragmatism and de-ideologizing, which are noticeable even in relation to Cuba and Venezuela (although ideological and geopolitical factors are probably not ignored in either Havana or Caracas), are characteristic features that add depth and importance to the ties that China is establishing with Latin America.

For China, Latin America continues to be a distant continent, and with respect to this, it must remain prudent throughout its rapprochement lest its actions be subject to any unfavorable interpretation by Washington. Yet the facts still point to a progressive importance being placed on the bilateral ties that, sooner rather than later-as China further establishes itself as a global power-will have detrimental political effects on other foreign players present in the region. And this may occur sooner than we think.