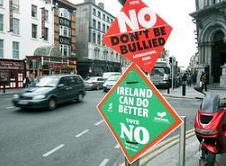 The Irish no to the Treaty of Lisbon has made a clear statement: it is imperative to take every European citizen seriously. If this does not happen, the EU will continue without substantial progress in the political arena. The preeminence of technical and the bureaucratic complications will push the EU at two different speeds, which could cause it to derail entirely, says the author.

(From Madrid) THE EUROPEAN UNION IS IN CRISIS. This is nothing new–since 2005 the organization has not been able to pick itself up off the ground. The Economic Union seems to work, but when citizens are asked about politics, they go running. Why is this? Perhaps it is because politics has not been explained well to them. It is always done in the most incomprehensible institutional and bureaucratic jargon, which usually includes unclear and difficult to understand transfers of power.

“Citizens don’t want foreign policy, immigration, taxation, and agriculture to be managed by a distant Brussels bureaucracy” The institutional changes that have been explicit remain somewhat undemocratic: the political parties are not European and the European Parliament does not directly elect the president of the committee. Rather, it is done by the 27 heads of state and government, and their work is rarely relevant. For the citizens of the member states, their Parliament members are totally unknown.

Citizens realize this and don’t like it because they do not identify with these power structures. They don’t want foreign policy, immigration, taxation, and agriculture to be managed by a distant Brussels bureaucracy and not by the ordinary citizen.

This being said, community ties that unite the citizens of the 27 countries of the EU are very scarce or vague. The technical and bureaucratic terms have been working better than civil society, and in the end, this has its due consequences. “The proponents of saying no to Europe are always closer to citizens’ concerns. The yes proponents talk in abstractions that, many times, common people don’t understand” The European does not identify with community politics–though it produces some 70 percent of the laws that govern him–but rather with national or regional politics.

We have the Irish referendum to show for this, in which priority was given to issues such as the loss of fiscal privileges, the neutrality of the country, or what to do with the more than 50 billion Euros that Dublin has received from the EU, making Ireland the second richest country on the continent.

The proponents of saying no to Europe are always closer and argue things related to citizens’ concerns. On the other hand, the yes proponents talk in abstractions about institutional issues that, many times, common people don’t understand.

“The “yes” advocates argued for the necessary reforms so that the EU of the future can function” In Ireland’s case, the group of EU skeptics formed by farmers, the church, Sin Feinn [1], some intellectuals, and the businessman Declan Ganley [2], has given many attractive and Manichean examples as reasons for their position: the rise in oil prices, immigration, the real estate crisis, increasing food prices, taxes on business, abortion, joint military exercises with the UK, or the introduction of Argentine meat.

Alternatively, the yes advocates, among whom were Prime Minister Brian Cowen [3], opposition parties such as Labor and Fine Gael, and influential news media, argued for the necessary reforms so that the EU of the future can function: a foreign minister, a more stable president, and the making of decisions based on the qualified majority.

A BAROQUE TREATY, WITHOUT HEART OR SOUL

“Paradoxically, institutional reform was supposed to bring Europe closer to its citizens” It is the struggle between populism and technocracy, and the victory will surely be the euroskeptic, the one who argues against the defenders of the Treaty of Lisbon. The end result is what it is: no to a baroque, Byzantine, and incomprehensible treaty cooked up by the Brussels elite behind the backs of the citizens.

Paradoxically, institutional reform was supposed to bring Europe closer to its citizens, yet it has had the opposite effect.

The problem is that European politicians do not learn. The European Council confirms that the ratifications of the treaty will continue with the corresponding exceptions of the Check Republic. “We cannot continue to ignore citizens and disregard their opinion from the vantage point of Brussels’ enlightened despotism” Ireland was given more time to find a solution but nothing has happened. So, October will come and in the Council, under French presidency, a second referendum will be called for June 2009, the date of the Europarlaimentary elections.

However, how is it possible to call another referendum when 53 percent of citizens have rejected the treaty? The political legitimacy of the no’s is more than secured, since the outcome, as well as citizen participation, is over 50 percent.

It is time to take the European citizen seriously. If this doesn’t happen, the European Union will continue without significant progress in the field of politics.

The absence of a heart and soul, which only citizens can bring, and the preeminence of technical and the bureaucratic jargon, will start to create a EU moving at two different speeds, which could cause it to derail itself. We cannot continue to ignore citizens and disregard their opinion from the vantage point of Brussels’ enlightened despotism. The elections of 2009 are just around the corner.