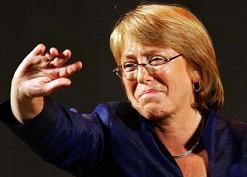 The author says that there is a social democratic left in Latin America that has left behind schools of thought from the Sixties and ancient times in order to join the globalized world, without any messianic speeches. Michelle Bachelet’s Chilean government is exhibiting flexibility and pragmatism, and it has understood that foreign investment, political stability and economic liberalization are necessary for success.

(From Montevideo) CHILE CONTINUES TO SET THE EXAMPLE in South America for how to take advantage of economic globalization.

Uruguay has just signed a strategic agreement with Santiago that, among other things, will allow Uruguayan businessmen to access, through Chile, 56 countries from all over the globe –among them the United States and the European Union– with whom President Michelle Bachelet’s government has signed Free Trade Agreements (FTAs).

“The FTAs, which were criticized by the traditional Uruguayan left and the labor unions, were finally set up in the country through an indirect route, with help from the Chilean government” The bilateral trade agreements between Chile and Uruguay make it possible for the two countries to forge a relationship, even if it is not entirely clear at this point exact what type of relationship we are talking about. Uruguayan companies can now access open markets through Chile and thus reap the rewards from the commercial benefits that the Andean nation has achieved. Uruguayan businessmen can work together with their Chilean partners in order to carry out some of the production processes so that they comply with the requirements stipulated in the trade agreements. In this manner, they can export, with privileges, to the North American, European and Asian markets.

The FTAs, which were criticized by the traditional Uruguayan left and the labor unions, were finally set up in the country through an indirect route, with help from the Chilean government. Now everything depends on the initiative that the businessmen take.

WHEN DEALING WITH ECONOMICS, DEVELOPMENT IS AT STAKE

“Wealth is not created through discourse: discourse produces nothing, creates no jobs, and does not provide good health, education, or technology” President Bachelet, just like her predecessors in the Concertación coalition of socialists, Christian democrats and other parties, knew to get rid of last century’s ideology and discourse, which the majority of the Latin American orthodox left remains hung up on. In doing so, Chile has become one of the most globalized economies in the world.

Bachelet realized that, when dealing with economics, a country’s development is at stake. Wealth is not created through discourse: discourse produces nothing, creates no jobs, and does not provide good health, education, or technology. Foreign investment and open economies are a reality, and they must be kept in mind.

Today, “Chilean businessmen have invested more than 40 billion dollars, creating more than 200,000 jobs”Chile, with its 16 million inhabitants, has trade agreements in effect that give it preferential treatment with more than fifty countries, which translates into some 3.9 billion consumers. The ratification of a free trade agreement with Peru only a few weeks ago added to the number, and in the last decade agreements with China, Korea, Japan, India, Singapore and New Zealand, among others, have boosted the number.

Chile has also put the finishing touches on a free trade agreement with Australia, and it is in the process of negotiation with Turkey, Malaysia, Thailand and Vietnam.

As a result of this expansion, “Chile has learned the lesson that many leftist governments reject because they are knee-deep in classic Marxist texts” Chilean businessmen have increased the competitiveness of their exports: They have invested more than 40 billion dollars outside of the country’s borders, creating more than 200,000 jobs. Direct Chilean investment in Uruguay has reached 480 million dollars.

Foreign trade is the cornerstone of a country’s development and, regarding globalization, competitiveness is closely linked to whoever arrives first with good products. Hence, greater value must be assigned to the actual products themselves. Chile has learned this lesson, which many leftist governments reject because they are knee-deep in classic Marxist texts.

“Chile has managed to move forward with a new system of social protection, which guarantees rights to all citizens, from birth until old age” Echoing ex-President Ricardo Lagos’ famous line, Chile is hoping to get rich through trade between the East and the West, just like the Republic of Venice once did.

Despite international difficulties in the macroeconomic arena, the government has kept those variables constant, and thanks to countercyclical policies in place due to a structural surplus that was institutionalized, Chile has managed to move forward with a new system of social protection, which guarantees rights to all citizens, from birth until old age.

Contrary to what occurred in some nations that, due to the economic crisis, had to lower their social spending and even decrease fiscal spending during the year 2008, according to reports Chile finds itself in the position of being able to implement provisional reform. Chile has obviously not solved all of their problems, but it’s headed down a good path.

“The left of the past believes in a tightly controlled state run by clientelism that curtails democracy and mistrusts globalization while fighting a never ending battle” Today, ideology must not in any way thwart the prospects for growth that international trade offers. The left’s dilemma is whether to choose democracy and modernity, or the authoritarian and quasi-messianic populism that some leftist governments ascribe to.

It is more than clear that there are two lefts in Latin America. One has learned from the errors committed during the Cold War and, within the framework of the market economy model, has created a way out of its economy’s social problems, with state intervention in the form of social policies. Within the framework of foreign policy, these governments believe in globalization and are strongly integrated into it by means of free trade agreements. They seek to regulate it, not to condemn it through the multilateral route.

“As Isabel Allende said in Montevideo, her father would be happy with the FTAs” The other left, the one of the past, with populist and nationalist roots, is tied to the experiments of the governments of Juan Domingo Perón in Argentina, Juan Velasco Alvarado in Peru, Getulio Vargas in Brazil and Lázaro Cárdenas in Mexico, and run by the failed dictatorial Cuban regime that today-after nearly 50 years of absolute power-finally recognizes that it has to change because its economic model has not solved the problems afflicting the Cuban people.

Chávez, Kirchner, Morales, Correa and Ortega’s governments are part of this group. They believe in a tightly controlled state run by clientelism that curtails democracy and mistrusts globalization while fighting a never ending battle, both within and beyond their borders. They take a hysterical approach to politics, riling up society with apocalyptic speeches that at their core boil down to a simple ultimatum: you’re either with me, or you’re against me.

Chile’s lesson has reached the eyes and ears of Colombia, Peru and Central America. These countries do not want to repeat old mistakes, such as repeatedly rejecting the same free trade that has made other nations more prosperous. Responsible governments must put national interests above nostalgia, grandiloquent rhetoric and strident ideology.

There is a social democratic left that has been smart enough to leave behind schools of thought from the Sixties and ancient times in order to join today’s world, without messianic speeches, armed revolutions, violent pickets, and paramilitary militias. The Chilean democratic government is exhibiting rhetoric-free flexibility and pragmatism.

Isabel Allende said in Montevideo, My father would be happy with the FTAs. This is a lesson that many Uruguayan and Latin American leftist politicians were not able to learn. Those two lefts still coexist in the Uruguayan left, and they argue over many issues. This is a defining moment in their respective histories. Will they be able to leave the past behind or will they remain stuck in old fundamentalist discourse?