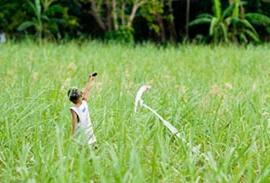 While the industrial world is trying to cope with the skyrocketing price of oil, developing countries such as the Philippines are beginning to shift their gazes away from industry and towards the formerly maligned agrarian sector in order to ease their economic woes as the price of food continues to climb.

(From Manila) IF ONE WERE TO ATTEMPT to put a positive spin on the spiraling oil prices, it could perhaps be said that many developing countries that have shunned agriculture in favour of industries have come to realize that the once maligned agrarian sector, which had often been seen as a sign of underdevelopment, has once again become an important element of national growth.

A SYSTEMATIC BIAS AGAINST AGRICULTURE

In the case of the Philippines, “Poverty is highest in the agrarian sector” agriculture has been neglected for far too long; policies have been biased against it since as early as the 1950s. For instance, apparati designed to boost agricultural production, such as farm machines, have historically had high tariffs of between 30 to 50 percent; on the other hand, tariffs for comparable apparati in the industry sector are only in the single digits. Suitable infrastructure has always been reserved for the industry and services sectors, whereas for everything from farmland and market roads to irrigation and post-harvest facilities infrastructure remains inadequate. What’s more, credit support in the agrarian sector is also very limited.

Not surprisingly, poverty is highest in the agrarian sector, with an incidence of 50.8 percent for fisherfolk and 46.6 percent for farmers, thus contributing to the country’s high poverty rates in rural areas.

“Some extension workers are involved in non-extension activities” The bias against this sector is no less evident when considering how extension work in the country has diminished over the last decade. This trend has coincided with a decrease in governmental support at the national level, which itself immediately followed the devolution of powers that resulted from the Local Government Code of 1991. Unfortunately, many local government units (LGUs) have given scant attention to extension services.

Dr. Virginia Cardenas, vice chancellor for Community Affairs of the University of the Philippines, Los Baños and the President of the Philippine Extension Network (PEN), Inc., says that the link between research and extension has weakened under the devolved government system. During field visits her organizations discovered that some extension workers are involved in non-extension activities, such as tax collection or menial work like watering plants and seedlings under clean and green projects.

This is a wasted opportunity since extension work, especially for the agrarian and fishery sector, is critical in promoting technologies and circulating information that could contribute to the overall poverty alleviation effort. “The Philippines is a net importer of many food items, particularly rice, corn, wheat, milk and beef; as such, it faces dire consequences if food prices continue to rise sharply” Cardenas cited a study by the Asian Development Bank that found that every 1 percentage point of growth in agriculture would reduce poverty by a little over 1 percent, but it would take growth of 25 to 30 percent in the industry sector to bring about the same impact.

For instance, studies have shown that crop yields can be increased by simple improvements in cultivation practices such as the use of improved seed varieties and adjustments in cropping pattern due to recent changes in the rainfall trend as a result of global warming, practices largely spread by extension workers.

The World Bank also cited fish farming and horticulture exports, which are not as low-tech as some people might think and in fact require sophisticated inputs, skilled labour and laboratories to ensure that fish produce comply with health and safety regulations. Again, much of the responsibility for this lies with the extension workers. “Traditionally, government policies on agricultural extension have been strongly oriented towards the perpetuation of subsistence farming”

The Philippines is a net importer of many food items, particularly rice, corn, wheat, milk and beef; as such, it faces dire consequences if food prices continue to rise sharply. As it is, impoverished Filipinos already spend more than a third of their total income on food and transportation, while the government nervously wonders what the political consequences might be if things do not begin to improve soon. All the more reason for extension work to be made relevant again.

Meanwhile, countries in the ASEAN region with widespread extension services, such as Thailand, Malaysia and even Vietnam, have strong agrarian sectors and are better off than the Philippines in terms of the economy and food security now that food prices are rising worldwide.

EXTENSION WORK AS AN EDUCATIONAL PROCESS

Cardenas emphasizes, Extension work should not be viewed as the end of the line but as an educational process. Extension should lead research and reflect the voice of the farmers, fisherfolk and communities to make research relevant to the needs of the clients they serve.

“Support from local leaders is still the key for extension work to succeed, and only political will can make it really contribute to national development” According to her, PEN is training extension workers throughout the Philippines to employ more scientific and critical methods when solving local problems and discard what she refers to as the cookbook mentality: a mindset in which a step by step procedure is applied to everything. She says the Network is exploring how extension workers can help meet the developmental challenges facing the agrarian, mining and exportation industries.

Traditionally, government policies on agricultural extension have been strongly oriented towards the perpetuation of subsistence farming. However, it would be more useful to examine how extension services can contribute to the growth of entrepreneurship in the country, and how pilot research can be made more relevant.

Ramón López, executive director of the Philippine Center for Entrepreneurship, says that total entrepreneurial activity in the country is high, thanks largely to remittances from migrant workers. Still, most of the businesses are small in scale or what he calls survival micro-entrepreneurs, which have a minimal effect on job creation and income growth. Since many are entering the very competitive sector and have a low rate of innovation and technology usage, most would fold in under five years, thus giving the country the third highest small-business mortality rate in Asia.

López believes that money can still be made in farming and fishing and that extension work will play a crucial role in making the sector productive and competitive, but support from local leaders is still the key for extension work to succeed, and only political will can make it really contribute to national development. In particular, LGUs must realize that extension work is critical in maintaining competitiveness while rapidly changing economic and business conditions demand innovative responses.