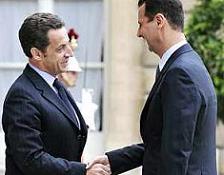 After several years in isolation, Bashar al-Assad has returned to the scene, with the help of Nicolas Sarkozy. Al-Assad has realized that in order to regain international respect, Syria must hold negotiations with Israel. But, how long will Bashar’s return to the international scene last? What will happen the day that Damascus withdraws its support for Hezbolah and Hamas? And what will become of Damascus’ relationship with Teheran?

THE SYRIAN PRESIDENT, Bashar al-Assad, has been honorably received by his French counterpart, Nicolas Sarkozy.

This is news because, until recently, the international community had isolated the Syrian regime for its responsibility and participation in the destabilization of Lebanon, its support of violent groups like Hezbolah in Lebanon and Hamas in Gaza, and its friendship with the Mullah regime in Iran. On top of all of this is the criticism levied by the Bush administration, which has accused al-Assad’s regime of developing a nuclear bomb with North Korea’s help, an accusation that Damascus has vehemently denied.

In 2005, it was widely speculated that the Syrian leader’s days in power were numbered. However, he has survived various challenges, domestic as well as foreign, and here he is once more, being applauded by just about every important player on the scene in the Middle East.

What can explain the return of the well-educated autocrat, as he was recently described by the French newspaper Le Monde?

A STORY OF LOVE AND HATE

Bashar al-Assad took control of the reins of power after the tragic death of his brother Basil [1], who his deceased father, Hafez al-Assad [2], had been preparing to succeed him.

“Following the assassination in February 2005 of the Primer Minister of Lebanon, Rafiq Hariri, the Syrian troops had to leave the country after nearly thirty years of occupation, which constituted a harsh blow to the Syrian regime” Like any good apprentice, Bashar al-Assad managed to work around the various weakened fields of Syrian domestic policy, such as those that have arisen due to regional rivalries. In fact, one of the lessons that he learned from his father is that the best strategy for guaranteeing the survival of the regime consists of wearing out the enemies.

The Syrians were invited to Lebanon by distinguished Christian leaders in 1976, so that they would save them from attacks by the coalition between the Lebanese leftist sector and the PLO (Palestine Liberation Organization).

Syrian troops entered Lebanon with the blessings of the United States and Israel. Both countries were worried that the civil war in Lebanon could detract from the peace process between Egypt and Israel, which was supported by the Americans. The Syrians used Lebanon as a convenient stronghold, thanks to the rivalry between the leaders of the Lebanese factions, with each one hoping to score some points with the regime in Damascus.

However, following the assassination in February 2005 of the Primer Minister of Lebanon, Rafiq Hariri [3], the Syrian troops had to leave the country after nearly thirty years of occupation, which constituted a harsh blow to the Syrian regime.

At the time, President Bashar al-Assad, worried that Lebanon would turn into another Cuba and cause problems for strategic Syrian interests, gave in.

COMPLEX RELATIONS WITH ISRAEL AND RAPPROCHEMENT WITH IRAN

Until recently, negotiations between Syria and Israel had been at a standstill, regardless of how close they were to reaching an agreement. Bashar al-Assad realized that, for his country to regain international respect, he had to open indirect negotiations with the Israelis. “After the invasion of Iraq in 2003, Syria and Iran, fearing a long, drawn-out American presence in the region, strengthened their relationship and supported violent, anti-Western groups” The Syrian regime asked Turkey for help, and the Turks, who enjoy good relations with both Israel and Syria, lent them a hand. Now France is taking on the task of reopening negotiations between Syria and Israel, with indirect help, albeit not very enthusiastic, from the United States. Bashar al-Assad is hoping that the new administration in the White House, set to take office during the beginning of 2009, will augur a warmer relationship between Damascus and Washington.

Syria has also maintained its close relations with Iran. The Syrians had helped Tehran in its long war against Sadam Hussein’s Iraq: when Sadam Hussein invaded Kuwait, President Hafez al-Assad sent troops to support the Western coalition’s forces, with the goal of expelling the Iraqi troops from the little Gulf Emirate.

After the American invasion of Iraq in 2003, Syria and Iran, fearing a long, drawn-out American presence in the region, decided to strengthen their relationship and support the violent, anti-Western groups in Iraq and the rest of the region.

THE LION OF DAMASCUS HAS RETURNED

Syria faces many challenges today, such as constant human rights violations, exemplified by the incarceration of various opponents of the regime.

In the year 2000 there was hope that Bashar al-Assad would ease up on the ironclad and brutal control that his security forces maintained over the country, but the Damascus Spring, the name given to the time period, did not last long, and ended with the regime resorting to repressive measures in order to squelch all public participation in the political process.

For now, the news is that Bashar has returned, with the help of his friend Nicolas Sarkozy. And along with his arrival come questions… Are we dealing with a marriage of convenience? How long will Bashar’s return last? What will he do the day he decides to withdraw his support for groups like Hezbolah and Hamas? How will this impact relations between Syria and Iran?

All of the above are open questions seeking to be answered. But for now, there is only one indisputable reality: the Lion of Damascus has returned!