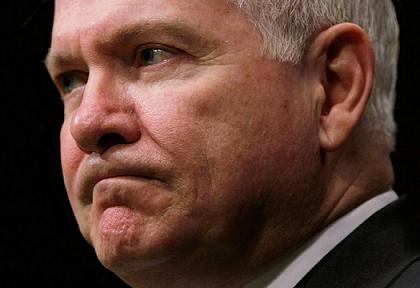 It is Iran’s ability and willingness to contribute to stabilise the Middle East, and the hardcore realpolitik pursued to this end, that compelled the Bush administration to pursue higher level security talks with the Islamic Republic, says the author. It remains to be seen if the next President in the White House will appreciate these changing realities within the region, or will continue to huff and puff like an exhausted diva forced to share the grand stage (of world politics) with others.

(From London) WHEN IRAN TEST FIRED its Shahab missile arsenal a few weeks ago, many analysts interpreted the move as yet another indicator of Iran’s intransigent “defiance” of the “international community”. Yes, it is true that Iran has build a self-sufficient military-industrial complex, that it is mass producing tanks, fighter jets and long range missiles, and that it has also established a space programme that successfully launched the first Iranian built satellite, Kavoshgar or “Explorer”, into orbit earlier this year. Yet by all current standards none of these programmes poses a real threat to Israel and/or the United States, regardless of how some hysterical commentators in these countries may portray them.

A SUPPOSED THREAT: THE FACTS

Here are some facts from the other side. According to data compiled by the International Institute for Strategic Studies (IISS) in London, Israel’s per capita military expenditure is US$ 1,565, almost 200 times more than Iran’s, which stands at US$ 81. Overall, Israel spends twice as much on its military sector than Iran, amounting to US$ 9.8 billion in 2005. Moreover, the Pentagon’s military budget for 2007 was US$ 456 billion. Indeed, this year’s spending on the Iraq war alone, which amounts to US$ 141.7 billion, is over 30 times higher than Iran’s total military budget. Incidentally, it is also greater than the combined defence expenditure of China and Russia. Look at the estimated 200 nuclear weapons that Israel has, and on top of that the thousands that the United States controls, and you can get a sense of the military “threat” that Iran poses to these countries. Indeed, in terms of conventional and non-conventional weaponry and the direct involvement in conflicts, Israel and the United States are among the most militarised countries in the world.

And yet, Israeli politicians threaten to attack Iran on an almost daily basis, they widely advertise their Iran-focused war games and the press in the country has adopted an almost hysterical obsession with the self-concocted Iranian “threat”. And as for the United States, Senator John McCain joked about bombing Iran at a campaign appearance in April 2007 and recently expressed his gratitude to the Iranians for continuing to smoke American cigarettes because it may kill them. Even Senator Hillary Clinton’s remark that she would “obliterate” Iran in its entirety (i.e. as a nation) and Barack Obama’s speech at the AIPAC in which he twice stressed that he would do “everything in (his) power” to prevent Iran from gaining a nuclear weapon, cease to shock.

What should indeed surprise anyone wary of the activities of the war parties in the United States and Israel is that a whole range of people responsible for the disaster in Iraq continue to indulge in their privileged positions despite their complicity in the fabrication and dissemination of the lies surrounding the invasion of the country in 2003. There are individuals such as Con Coughlin of the Daily Telegraph in the United Kingdom, who is an exceptionally talented and adept tale teller. In the immediate build up to the invasion of Iraq he readily popularised the lie that Saddam Hussein could launch a WMD strike within 45 minutes of an attack on the country. He also concocted a story linking Mohamed Ata, one of the 9/11 terrorists, to Saddam Hussein’s intelligence services. Both myths have been revealed as such by successive American and British intelligence reports, and yet Coughlin continues to merrily type away, linking Iran to all sorts of things, including al-Qaeda, of course. Alas, the functionaries of war continue to mislead, lie and deceive.

And then there are more hybrid promoters of war such as the American Israel Public Affairs Committee (AIPAC). I have written repeatedly about AIPAC’s complicity in the Iraq war and its role in the continuous confrontation with Iran. By now the ‘Israel Lobby’, which continuously pushes and shoves American foreign policy towards an uncompromisingly pro-Zionist direction, has been dissected by many scholars, from Stephen Walt and John J. Mearsheimer to new historians of Israel like Ilan Pappe. All of them have correctly pointed to the fact that AIPAC is rather unrepresentative of its constituency, which is the Jewish community in the United States and Israelis themselves. In both countries, many polls confirm that the majority favours dialogue over conflict. And yet, AIPAC continues to manipulate in the name of their constituency, and will continue to spread its virulently anti-Iranian, anti-Arab and anti-Muslim message until there is a viable counter-movement for peace that can balance it out.

But I don’t want to pursue another analysis of how these individuals and institutions attempt to condition us and our politicians to wage the next war that is in their interest and detrimental to ours. What is more important is that in the aftermath of the disaster in Iraq, they are unsuccessful. They may be able to sponsor an anti-Iranian resolution here and there, but the grand strategy to reprogram the country’s foreign policies is bound to fail. Even long-standing allies of the US in the region, such as Saudi Arabia, Jordan and Egypt, have repeatedly warned the Bush administration that Iran is unlikely to compromise its strategic preferences, even if attacked. Indeed, the American effort to present Iran as the major threat to the region in order to align the aforementioned states behind Israel has largely backfired.

These states are aware that any overt association with the US, and especially with Israel, threatens their legitimacy. After the devastation of Iraq (especially the Abu Ghraib scandal), the relentless bombing of Lebanon by Israel in the 2006 war and the continued mistreatment of the Palestinians, Arab and Muslim societies are understandably sensitive about US and Israeli designs for the region. The days when their governments could mould their opinions and subdue their actions are long gone. Satellite TV, the Internet and international education have empowered Jordanians, Egyptians, Saudi Arabians, Kuwaitis etc. to express themselves. They have entered into a dialectical relationship with the state, which is obliged to be attentive to their demands.

Both the emergent constellation in which civil society is rejecting the crumbling monopoly of authoritarian states and the prospect of continuous violence engendered by groups sympathising with al-Qaeda explain why countries such as Qatar and Saudi Arabia are pursuing a rather more forceful regional and international diplomacy. Both countries have been very active in defusing the stand-off in Lebanon, where the Bush Administration abjectly failed to marginalize Hesbollah in the political scene. Elsewhere, Turkey acts as an interlocutor between Israel and Syria in their negotiations concerning the Golan Heights, and Egypt has tried to defuse the situation in the Gaza strip by talking to both Hamas and Israel which has yielded a shaky cease fire agreement between the two. Moreover, Iran continues to be in close security dialogue with both the Maliki government in Iraq and Hamid Karzai’s administration in Kabul.

Indeed, it is Iran’s ability and willingness to contribute to stabilise these countries, and the hardcore realpolitik pursued to this end, that compelled the Bush administration to pursue higher level security talks with the Islamic Republic. It remains to be seen if the next President in the White House will appreciate these changing realities within the region, or will continue to huff and puff like an exhausted diva forced to share the grand stage (of world politics) with others.