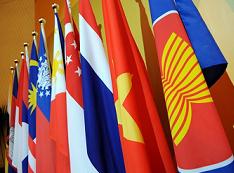 As its neighboring giants India and China continue to make significant inroads into the global economy, the still charter-less ASEAN [1] is mired in integration problems and struggling to forge a single market. The author points to a disparity in the amount of foreign direct investments received by the member states, as well as the weak trade within the association, as possible reasons for the association’s heretofore failure to integrate.

(From Manila) WITH NEARLY 600 MILLION PEOPLE, the ten-country Association of Southeast Asian Nations (ASEAN) could easily be a global force to be reckoned with, as its population is greater than the European Union’s (EU) and almost as twice as big as that of the United States. It is in the heart of Asia-Pacific, wedged between the two most populous (and yet still fast-growing) countries in the world: China and India.

The goal of ASEAN is to create a single market by 2015 to help ward off competition from both Asian giants, “The idea of a single market was inspired by the generally successful EU experience” yet it is simultaneously seeking to sign free-trade agreements with them that would cover billions of dollars in trade, but not in services.

ASEAN might be strategically located between China and India, but it is the two Asian giants that command the most attention because of their growing importance to trade, manufacturing and the global economy. Both are exhibiting GDP growth rates among the highest in the world, in spite of the tough economic environment. China’s expansion has been based on global trade and an opening of its economy, while that of India has been much different: it has generally relied on domestic consumption and internal capital.

INTEGRATION: THE THORN IN ASEAN’S SIDE

The idea of a single market was inspired by the generally successful EU experience. Unfortunately, ASEAN’s regional integration is not up to speed; in its 41-year existence the bloc has failed to produce such a cohesive market, and it shows few signs of doing so at the present time. Despite all of its ambitious rhetoric, it appears that ASEAN is not yet ready for integration, and that those areas given priority for integration, which look good on paper, are beset with problems posed by non-tariff trade barriers. “Three founding members –the Philippines, Indonesia and Thailand– have yet to ratify the Charter due to human rights issues in Myanmar”

The backbone of such integration is set to be the long-overdue ASEAN Charter, which is expected to come into force next year, and aims to provide a legal basis for the economic, political and social integration or alignment. The Charter must be ratified by all ten ASEAN member-states: Brunei, Cambodia, Indonesia, Laos, Malaysia, Myanmar, the Philippines, Singapore, Thailand and Vietnam.

So far, three founding members –the Philippines, Indonesia and Thailand– have yet to ratify the Charter due to human rights issues in Myanmar, which continues to ignore international criticism regarding said matter.

COMPETITION WITHIN THE ASSOCIATION?

At first blush ASEAN does not look to be doing badly at all, argues Michael Clancy, “ASEAN leaders should rely more on one another and push ahead with their programs for reform and more intra-trade. This is easier said than done”former chairman and CEO of the Philippine Business Leaders Forum comparing ASEAN competitiveness and attractiveness with the amount of foreign direct investments (FDI). Between 2005 and 2007 FDI flowing into China amounted to US$253.3 billion while India received a total of $44.4 billion. ASEAN as a sub-region received a total of US$151.9 billion.

However, Singapore’s inclusion skews the data, since half of the total ASEAN net flow goes to the small island state. When the country is taken out of the equation, the resulting picture is not quite as rosy: Singapore has received more than $15,000 per capita over the past three years, while the Philippines, the worst performing country in the association, “Intra-East Asian trade accounts for around 60 percent of the regional total; intra-ASEAN trade has fallen from 22.4 percent in 2000 to 20.9 percent today”has received a mere $74. To put things into perspective, China has received $194.

It is for this reason that ASEAN leaders should rely more on one another and push ahead with their programs for reform and more intra-trade. Unfortunately, this is easier said than done.

While ASEAN talks a lot about integration –especially economic integration– we have not yet seen very much from that process to transform ASEAN to a higher and more dynamic growth path that builds and reinforces interdependence. Indeed, quite the opposite seems to be happening, Clancy points out.

“The association must act quickly to resolve this identity crisis if it truly hopes to achieve an integrated market strong enough” While intra-East Asian (China, Indonesia, Malaysia, Philippines, Thailand, Vietnam and some smaller economies plus Hong Kong, South Korea, Singapore and Taiwan) trade now accounts for around 60 percent of the regional total, intra-ASEAN trade has fallen from 22.4 percent in 2000 to 20.9 percent today. Vietnam and Singapore have seen their ASEAN trade decline the most, while only the Philippines and Thailand appear to be more dependent on intra-ASEAN trade today than they were in 2000.

This decline is somewhat surprising and suggests a need for ASEAN to reevaluate its intra-trade policies. Or perhaps it suggests that ASEAN members see each other as nothing other than rival competitors. If this is the case, the association must act quickly to resolve this identity crisis if it truly hopes to achieve an integrated market strong enough to hold its own with the two Asian giants within the framework of the global economy.