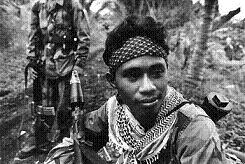 Muslims are the biggest ethnic group in the Philippines, and more than half of the population of the Autonomous Region of Muslim Mindanao is poor, and the area is thus a breeding ground for civil unrest. The author wonders whether the government can (and should) negotiate with a decentralized terrorist group like the Moro Islamic Liberation Front, and denounces President Arroyo’s brokering of deals in secrecy. He maintains that the lives of the Muslims must be improved, since economic and social development on Mindanao is necessary to achieve peace.

(From Manila) ONCE AGAIN, FIGHTING IN MINDANAO has put the Philippines in a bad light. Although the violence is limited to only a few areas in the country, overseas observers lump all of the islands together, and thus to them the entire country appears to be unstable, and hence a risky proposition for would be foreign investors.

But the proposed deal got flak from almost every sector, including the administration’s own supporters. In order to make a statement after the Supreme Court blocked the deal last August 4, the Islamic separatists resorted to violence, launching raids on hundreds of villages in Mindanao. They pillaged and burned houses, kidnapping and killing hapless civilian –including children– in several towns near the border with the current autonomous zone. As a consequence, almost 150 people were left dead, and some 160,000 residents were forced to evacuate.

Following days of fighting, the government pulled out of the controversial deal, leaving us with this question: Was the deal the right idea in the first place? Or better yet, should the government even offer this type of deal to such a volatile group?

A STRUGGLE WITH A LONG HISTORY

The Mindanao conflict is one of the oldest in the world, going back more than 400 years. Its roots are economic, cultural and religious, and are related to land ownership and access to natural resources. “In the early 1970s, the MNLF launched a full-scale rebellion, and since then more than 100,000 people have been killed in almost four decades of fighting in Mindanao”

Philippine Muslims are the biggest ethnic group in the Philippines. They have always resisted colonial rule, despite Spanish efforts to subdue them and change their lifestyle for more than three centuries. Thus, Spanish colonial authorities branded Muslims as bandits and troublemakers.

The Muslims also resisted subsequent American rule, and they launched several rebellions from 1899 to 1913, leading to many tragic and senseless massacres of Muslim freedom fighters and civilians. Yet the American colonial government would often brand them as notorious cattle thieves and murderers whose liquidation was welcomed by the entire Sulu Archipelago, in the process misleading the American public. Philippine history has sadly ignored the contribution of these Muslim heroes that fought bravely against colonial rule.

“If there is a Filipino way, it involves transparency, meaning progress being periodically reported to the public” But the recent secessionist movement in Mindanao has been associated with poverty and underdevelopment. Indeed, in the Autonomous Region of Muslim Mindanao [3] (ARMM), more than half of the population is poor. The island has long been neglected in favor of the main island of Luzon, and it should come as no surprise that the areas with the highest levels of poverty and malnutrition are also hotbeds of conflict and breeding grounds for unrest.

From the very start, the negotiation of the agreement has been shrouded in secrecy. This is the first mistake, as the public has generally been suspicious of any deals brokered in secrecy, especially under the current administration of President Gloria Arroyo [5], who has been embroiled in numerous controversies, some of which involve the First Family. If there is a Filipino way, it involves transparency, meaning progress being periodically reported to the public. It is often a slow and steady process, but it is effective for gaining public trust and approval.

There are fears that the agreement will increase the likelihood of territorial disputes. Moreover, it is likely to embolden other factions to again split off from the main organization, or form another band to demand more concessions from the government.

Some political analysts have also warned that greater independence for and less government control over the Islamic regions would invite even more terrorist activity in the area, which already has strong ties to Al Qaeda.

But right now, the most important thing is to improve the lives of the Muslims, so that they can assimilate into the greater society instead of being excluded from it.

It is a simple fact that to end the conflict in Mindanao and achieve peace, there must be sustained economic and social development on the island, and not just in Imperial Manila.