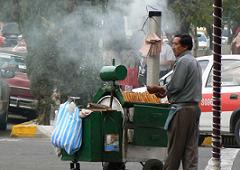 Wandering street vendors, self-employed workers, specialized workers, repairmen, small entrepreneurs, pensioners and even university professionals are faced with a paradoxical and hopeless reality in Latin America. They see that, no matter what they do, they remain mired in a life of poverty from which they cannot escape.

(From Santiago de Chile) LATIN AMERICA AND THE CARIBBEAN (LAC) could be seen as a continent of people who, during the course of their lives, are mainly either poor, on the edge of poverty or in the process of becoming impoverished. Stated like this, it sounds hopeless, but the truth is that, given the current conditions of human insecurity, very few of us can say that we have gotten over the risk of impoverishment once and for all. The majority of us are more or less approaching some type of poverty, and still many more are caught in its overwhelming and vicious circle. This borderline poverty appears to be spreading out on both sides, moving beyond those people who are poor because their income is simply below the minimum needed to survive. Many more people in Latin America and the Caribbean are poor today for reasons other than their income.

Alicia defined this kind of borderline poverty for us as such: you are on the edge of poverty because each month you have to make do with the money that you have, and you have to decide which bill to pay or where your money is going to go –a little bit here and a little bit there– without ever enjoying the luxury of having all the bills up to date. You feel like you are condemned to sacrifice one thing in order to enjoy another, and hunger and cold are knocking at your door (Alicia Cárdenas’ story).

A LIFE OF UNCERTAINTY

Welfare requests and the dearth of public resources have left us so occupied with the low income poor that we have not sufficiently noticed the accumulation of people above the poverty line who are experiencing a situation of growing uncertainty, and continue to be deprived of the social and economic conditions necessary to allow them to develop as people and effectively make use of their freedom. “Resigning ourselves to relativisms has brought us to think that we are better than Africa, where the majority of people are born into poverty and tend to die, often prematurely, without ever rising above it” What the majority of countries that have had success in lowering their poverty levels, like Costa Rica, Chile and Uruguay, have done well –but not well enough to be able to consider the job done– is transferring the poor to a neighboring borderline poverty. There, above the actual poverty line, they form a pool of human frailness. Perhaps we have jumped the gun here by bursting into a victory song, at least in view of a problem that looks like it will only become more complex, and more difficult to confront, in the next few years. Hence, it is necessary to be aware of it, and to shift our gaze in Latin America and the Caribbean towards this growing group of borderline poor people.

Resigning ourselves to relativisms has brought us to think that we are better than Africa, where, of course, the majority of people are born into poverty and tend to die, often prematurely, without ever rising above it. Every day, job insecurity, the devaluation of knowledge –considered obsolete by markets– and the reduction of the real value of pensions, together with other factors, send more people in the LAC region to the edge of poverty, which painfully, is growing stronger and stronger.

Poverty, in its diverse forms and degrees, brings us closer to a life of uncertainty and in fact, up to a certain point, it represents a temporary death of the possibility of constructing an identity for ourselves, which, using our own potential, would grant us the ability to be active people in charge of our own destiny. Thrown into poverty, we are left with only survival without a future: an endless final breath. This type of poverty is unbearable precisely because it does not kill us.

Poverty is creeping along and expanding. The real economy is not necessarily full of poverty, given that economies can grow even if there are millions of poor people; it is the poor people who suffer the consequences daily. “Perhaps the borderline poor form a social class that still does not know that it is such, and has yet to understand that the articulation of their individual power could lead to collective action” The arrival of democracy supposedly brought a breath of relief in the 90s, but even this is subject to debate and quite in spite of those of us who consider ourselves to be its promoters, democracy in itself has not been able to fulfill the citizens’ expectations. Without setting out to do it, it has unleashed dejection, brought back old frustrations and opened new wounds. Democracy has not been able to give way to the necessary democratization. The welcome modernizations, in turn, have been distributed unequally, and every time they take root they seem to serve as a bridge to new sources of persistent conflicts: between the State and a discontinuous citizenship, between businesses and the State, and between the State and a civil society lacking political strength. These are all based on conflicts between the techno-economic system and the natural environment, as well as the impact of the globalized markets. In this context, poverty is transforming and revitalizing itself, and what makes it chronic is that it is not always the poor among the poor anymore, but those that remain poor in relationship to everyone, and those that are constantly falling into and getting out of poverty, or those that cannot be sure that they have ceased to be poor. This new, growing group of borderline poor people, which now includes the educated poor, for whom there is no job demand, is at its height –and yet somehow still growing– in the LAC region (and possibly in other places).

Interestingly enough, these emerging borderline poor people are far from forming a social class, at least if we define the term as sociologists do. In the first place, it is most likely that these people are not even aware of their own existence, and as such they do not exist for themselves. They do not see themselves as being borderline poor in order to group together with similar people, and even less to socially vindicate themselves. Perhaps the borderline poor form a social class that still does not know that it is such, and has yet to understand that the articulation of their individual power could lead to collective action. For now, these borderline poor people do not represent a threat for governance in the region, but it is of course only a matter of time until they do. We should hope that the representative political parties shift their gaze towards these borderline poor people, and that our civil society makes what is its greatest urgency a priority, in order to send resources and support their way. It is worth stating that this group of borderline poor people will continue to grow larger, and wallow in their own unfortunate reality, until… well, until they come of age: when they come to be a relative majority in Latin America and the Caribbean. Will we come to be a continent of borderline poor people?

For those of us who long to put an end to it, it is disheartening that poverty is transforming and revitalizing itself. We must combat, then, these new realities of poverty, which will strengthen democracy, but above all, and without a doubt, make it easier to achieve freedom. People not only have the right to say and decide what they want to do with their lives, but it is a necessary condition for the social sustainability of our species. Democracy must take the risk that freedom runs, given that this appears to be the only available path to ending all forms of human poverty, injustice and insecurity, and with these ensuring societies in which we can coexist in peace with a level of decency and dignity appropriate for a unique and diverse Humanity.