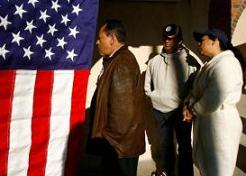 Frequently, the media highlights the determinate role of minorities in the American elections, and provides data to back up its claim. But the issue is much more complex than it appears at first glance: not all Latino, Asian, Black, and Jewish communities vote en bloc. Far from it.

(From Madrid) VERY FREQUENTLY, the media highlights the determinate role of minorities in the American elections, and provides data to back up its claim. The Latino vote is going to be decisive, announced the governor of New Mexico, Bill Richardson, this past June 8th. But the issue is much more complex than it appears at first glance. To begin any electoral process by stating that a segment of the electorate has decided or will decide the election is, at the very least, risky. And why aren’t the other groups that have voted just as well not going to decide the outcome? “Candidates are forced to carry out costly and delicate campaigns, specifically targeted at each minority group and its organizations” Nevertheless, it is legitimate to play this game from an electoral analysis point of view because, in contrast, it does indeed help us  understand trends and electoral systems, which are often very complicated, especially in the United States.

For example, with 47 million inhabitants (approximately 15 percent of the population), Hispanics (or Latinos) constitute the largest minority, yet in the best case scenario their electoral weight (a maximum of 9.2 million) does not even reach 9 percent of the total. This means that in global terms they carry an important, yet not decisive, weight. In any case, we must look at their electoral influence on a state by state level, and it is certain that in some states, like Texas, Colorado, New Mexico, California and especially Florida, they are able to nudge the delegates towards one party or the other, who in turn tip the scales in favor of one of the candidates in the Electoral College. But of course, as already stated, they are no more determinate than the same party’s other voters.

Be as it may, candidates and their political teams are forced to carry out costly and delicate campaigns, specifically targeted at each minority group and its organizations. Above all, they must do this for the largest minorities, and those considered to be the most influential.

MINORITIES ARE ASSOCIATED WITH THE BIG DEBATES

Minorities are important due to their sheer size, but what is possibly even more important is how they generally influence and are present in the big debates in American society. The black minority, for example, is involved in the big discussion on racism, but not only that against African Americans, but also racism directed at other ethnic groups, such as the Native Americans. “The racist controversy does not concern the black population exclusively; it also shapes a large chunk of the white vote” During his famous speech on March 18th in Philadelphia, Barack Obama himself said: Race is an issue that this nation cannot afford to ignore right now.

The occurrence of multiple racist demonstrations constitutes an as yet unresolved matter. One needs to remember that racism was at the heart of the only civil war to take place in the United States (1861-1865), that the Civil Rights Act was enacted back in 1964 and yet the country is still plagued by episodes of clear racism (some of which are instigated by the police), as well as a more or less vague feeling of white superiority. The Ku Klux Klan appears to be growing stronger every day, after having almost disappeared completely. The racist controversy does not concern the black population exclusively; it also shapes a large chunk of the white vote. Something close to 8 percent of the white electorate admitted in polls that they would never vote for a black candidate, i.e. Barack Obama,  even if they were both to share the same ideology, and only 31 percent of whites have an entirely favorable opinion of Obama.

In turn, “Why do they have to vote the same way, simply because they are black? The same could be said of the Hispanics, who are caught in the crossfire of the differences present in Latin America” the Latino minority raises the complicated subject of immigration, a very sensitive topic in a country that was founded by immigrants, and still receives millions of them, both legal and illegal. The pressure caused by Hispanic immigration – and the Hispanic demographic in general – worries the rest of the voters, and as such the statements and promises regarding the subject that are made during the campaign can greatly influence their vote. For this reason, the candidates must not lose sight of what is visible in their rear view mirror when they address each each minority group and ask them for their vote, since they also impact the rest of the voters when they do this. And so on, and so forth.

These days, the Asians, who also have a long history of racial repression and scorn, reflect the embroiled relations with the Chinese giant (governed by the Communist Party, lest we forget). Moreover, the Jews bring up one of the fundamental axes of foreign policy: relations with Israel and the conflict in the Middle East. The Native Americans are few (some two million belonging to 600 different tribes), but they are a permanent and painful reminder of a society still marked by a certain genocide, which, depending on how one looks at it, is still not over. Et cetera.

In contrast, minorities are also not as homogeneous as we are sometimes meant to believe. “Simply by being a woman, Hillary Clinton is a minority among professional politicians, no matter how much her campaign message was one of a very heterogeneous majority” Even the one that is the most homogeneous from an ethnic point of view, the African American minority, is very socially and territorially fractured, and it is not odd that the interests of its bourgeois do not even come close to coinciding with the aspirations of the black populations living in the downcast and marginalized ghettos in  the big cities or the poorer states of the South. Why do they have to vote the same way, simply because they are black? The same could be said of the Hispanics, who are caught in the crossfire of all of the differences and clashes present in Latin America: Castrists versus anti-Castrists, Mexicans from the north versus Mexicans from the south, Colombians versus Venezuelans, Chileans versus Bolivians, assimilated Puerto Ricans versus pro-independent Puerto Ricans, et cetera.

But it is that, aside from this, Hispanics in Chicago see things differently than those in Florida, and Hispanics in California don’t see things like their brethren in New York. African Americans are together with the other minorities in their fight against racism, but at the same time they are competing for very similar jobs, and we can be sure that the economic crisis will create more of these clashes. When, on May 20th  in Miami, McCain promised that if he is elected president he will favor the continued persecution of Fidel and Raúl Castro, he won over the anti-Castrists, “American society was built on racial prejudices and distinct bands of immigrants” but at the same time he alienated other Hispanic immigrants that are fearful of this hardliner image.

Some analysts, like Miguel A. Bastenier, remind us that there are also minorities within minorities. For example, Barack Obama is an atypical case within the black community. Neither his ancestry (he is not descended from slaves brought over from Africa), nor his education and his career is similar to those of the majority of blacks. For this reason, many of them do not recognize him as one of their own; nor do the whites. Moreover, Mike Huckabee is a loyal follower of the Baptist church, which goes against the interests of his party’s Catholics of Italian or Irish descent, like the former Republican candidate, Rudy Giuliani. Mitt Romney is Mormon, another religious minority (Christian?) unable to be assimilated by the rest of the groups. And simply by being a woman, Hillary Clinton is a minority among professional politicians, no matter how much her campaign message was one of a very heterogeneous majority. Besides, up until now all 43 presidents of the United States have been white males.

A MAJORITY MADE UP OF MINORITIES

Accustomed to much more homogeneous societies (practically all of Spain’s inhabitants belong to the Latin culture, speak the Castillian language and follow the Catholic tradition), Europeans find it hard to understand the enormous variation present within American society, which indeed goes back to its very inception. As Gabriel Jackson reminds us, American society was built on racial prejudices and distinct bands of immigrants. And if you don’t think so, watch Martin Scorsese’s magnificent film Gangs of New York.

During an election year the only way out is for the minorities to create a net of agreements between each other, and if you look closely, the candidates themselves are hard at work doing the same thing, putting it above the task of strictly racking up votes. Weaving together established majorities that go beyond the simple electoral result and actually have the whole legislature in mind is a very laborious job involving the large minorities, and not just the projection of certain images and a litany of unsubstantial promises.