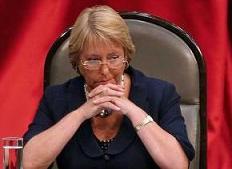 Aside from giving Bolivia a breather, the recent emergency meeting of the twelve countries of UNASUR – for which Michelle Bachelet took the initiative – has, above all, amounted to a display of smart power, and is further proof of the solidity of the consensus for stability and development in Latin America.

(From Buenos Aires) YOU HAVE TO APPLAUD the excellent reflexes and exemplary presidential diplomacy demonstrated these past few weeks by the Chilean president Michelle Bachelet when she urgently gathered the South American leaders in Santiago in order to support democracy in Bolivia, and then later brought them together in New York one week later, taking advantage of the United Nations General Assembly. With the strong display of solidarity and (actual material) support for Evo Morales’ legitimate government, unanimously approved by the twelve members of the Union of South American Nations (UNASUR) in Santiago on September 15th, Bolivia was given some breathing room in order to better face the separatist crisis and the threats of civil war that are placing the country under great tension.

These meetings have shown a region with the ability to overcome their differences and join together in an autonomous whole when it is time to face great challenges or – at the very least – serious imminent crises in one of the countries. Bachelet came out strengthened, like a president pro-tempore of a multilateral organization that was created just four months ago in Brasilia, and plagued with doubts and an uncertain future. She projects an image of strong leadership in the international arena.

Nine of the twelve South American presidents were present at the meeting: Cristina Fernández de Kirchner of Argentina; Evo Morales of Bolivia; Luiz Inácio Lula da Silva of Brazil; Álvaro Uribe of Colombia; Michelle Bachelet of Chile; Rafael Correa of Ecuador; Fernando Lugo of Paraguay; Tabaré Vásquez of Uruguay; and Hugo Chávez of Venezuela. “The regional meeting served to offset the disruptive and polarizing tendencies that are clearly evident in the national and intraregional scenes”

Not in attendance was Alan García of Peru, who was represented by his chancellor José Antonio García Belaunde. Surinam and Guyana were represented by ambassadors, and the Secretary General of the Organization of American States (OAS), the Chilean José Miguel Insulza, also participated in the summit, although in a more secondary role this time around.

The regional meeting also served to offset the disruptive and polarizing tendencies that are clearly evident in the national and intraregional scenes. Andean reporters and analysts pointed out the way in which right wing leaders, commentaries in the major newspapers and certain radio broadcasts and television programs made an effort to call attention to the alleged novel journalistic angles, like how Morales arrived in a Venezuelan plane, or how Chavez went ahead and announced the meeting before Bachelet, or how the Peruvian government would be offended because Morales spoke of Peruvian hit men as being criminals, or Lula’s doubts concerning the usefulness of the meeting and other issues, thus trivializing the presidential gathering.

It is worthwhile to consider the nine substantial points agreed upon by the South Americans heads of state:

1. They express total support for the Constitutional Government of the president of the Republic of Bolivia, Evo Morales, whose mandate was ratified by a large majority in a recent referendum.

“They urge all members of Bolivian society to preserve the national unity and territorial integrity of their country” 2. They warn that their respective governments wholeheartedly reject, and will not recognize, any situation that should involve an attempt at a civil coup or the disruption of institutional order, or  should compromise the territorial integrity of the Republic of Bolivia.

3. Consistent with the aforementioned, and keeping in consideration the serious situation affecting their sister nation, the Republic of Bolivia, they condemn the attack on government installations and public strength by those groups that are aiming to destabilize the Bolivian democracy. They demand the prompt return of these installations as a condition for initiating a process of dialog.

4. At the same time, they make a call to all political and social players involved to take the necessary steps to immediately put an end to the acts of violence and intimidation, and the contempt for institutionalized democracy and the established order of justice.

5. In this context, they express their utmost condemnation of the massacre that occurred in the Department of Pando, and they back the Bolivian government’s call for a UNASUR commission to be created in said sister country in order to carry out an impartial investigation to, in short, clear up the lamentable event and offer recommendations so as to guarantee that the event does not go unpunished.

6. They urge all members of Bolivian society to preserve the national unity and territorial integrity of their country – basic fundamentals of any state – and to reject any intent to undermine these principles.

“All of this occurred in the Coin House (Palacio de La Moneda, the seat of the President of Chile) the same palace that was destroyed by aerial bombing by the armed forces around the same date in September, 35 years ago. Something has changed in the region” 7. They call for dialog in order to create the necessary conditions to overcome the current situation, and to coordinate the search for a sustainable solution within the framework of total respect of the rule of law and the current legal order.

8. In that sense, the presidents of UNASUR agree to create an commission that is open to all of its members, coordinated by the president pro-tempore, in order to accompany the results of a table of dialog conducted by the legitimate government of Bolivia.

9. They create a commission for support and assistance to the government of Bolivia, as dictated by its needs, including specialized human resources.

All of this occurred in the Coin House (Palacio de La Moneda, the seat of the President of Chile) the same palace that was destroyed by aerial bombing by the armed forces around the same date in September, 35 years ago. Something has changed in the region. Another display of this is that, upon returning to Caracas, Chávez announced that a logistic subcommission is going to deal with supplying Bolivia with food and fuel in case of a scarcity like there was in Chile that lead to the overthrow Salvador Allende, or like the supply shortage in Venezuela caused by the employer strike during the coup of 2002.

“Some more proof of the solidity of this regional consensus will be seen when they get together in El Salvador at the Ibero-American Summit, one year after King Juan Carlos told the Venezuelan president to shut up” This joint action could be an indication of the employment of smart power, in a scene otherwise complicated by the resurgence of disputes over spheres of influence in South America that promise to escalate, together with arms projections. Smart power, defined by Joseph Nye as the ability to combine the hard power of dissuasive coercion with the soft power of the attraction to a successful strategy, is also understood in this region as the ability of democracies to establish multilateral alliances, societies and institutions, many of which have been altered in recent years, due to unilateral approaches and strictly national power policies that hinder the creation of cooperative regional spaces. This is why smart power also involves an increase in the role of economic development to help align national interests with those of other countries, with initiatives in areas defined as global public goods (the environment, human rights, public health, food).

Investing in a public diplomacy that does not solely concentrate on the relations between governments, but also on things such as face to face contact, education and exchanges aimed at young civilians is, in short, a strategic investment for each and every country, and for South America as a whole.

Regardless, some more proof of the solidity of this regional consensus – and that this is useful for more than just facing crises or serious threats, and amounts to more than a mere complaint forum in which to fight a certain famous, non-regional empire – will be seen in a few weeks when they get together in El Salvador during the end of October, at the Ibero-American Summit, one year after King Juan Carlos told the Venezuelan president to shut up