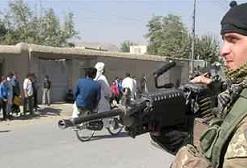 By and large the war in Afghanistan has been met with a chronic state of ambivalence by the international media after the onset of the war in Iraq. The situation grows direr every day and the author questions whether the objectives set forth by the U.S government are working or could have ever worked.

(From London) WITHIN THE POLITICAL AND INTELLECTUAL CIRCLES in the country I am living in, and maybe even beyond, in mainland Europe and North America, an ignorant and insidiously complacent attitude towards the war in Afghanistan is more or less taken for granted. At the time of writing it is exemplified in the few editorials, scholarly analyses and political ‘workshops’ about the past, present and future of the country. Intellectually, Afghanistan is the orphaned country par excellence. Iranians, Arabs and South Americans who complain about the misrepresentation of their peoples should look at the dismal plight of the Afghans, a nation and place seemingly without any contours.

“The problem is that there is no discourse to paste the Afghan story into. A people without voice are a people without a narrative” When the war started there was some outrage in rather more perceptive British newspapers such as The Guardian and The Independent especially about the bombing of Kabul’s telecommunication exchange, dam power stations, the al-Jazeera TV office, trucks and vans filled with Afghan refugees, and the farming village of Chowkar-Karez in which about 100 civilians died. Yet today, after the torture pictures taken at Abu Ghraib, after Guantanamo, after the horror of Iraq, people do not get easily shocked anymore. The public is saturated with death and destruction. Afghanistan has had dozens of Hadithas and Fallujas, which have been only marginally reported. How many editorials have you read about the UN report on the killing of 90 civilians, among them 60 children in the village of Nawabad in the Azizabad area of Shindand district? Or the 33 civilians killed in Nuristan a few months earlier in April 2008?

“Yet despite this heightened military activity, the neo-Taliban have stepped up their military campaigns as well” The problem is that there is no discourse to paste the Afghan story into. A people without voice are a people without a narrative. They are condemned to be without identity in a world where identification with the nation, religion, caste, or social class has developed enormous destructive potentialities. To those who believe that such normative issues do not have analytical value of a strategic kind, let me point to a few factors that qualify my subtitle title (i.e. the war in Afghanistan is lost). Every year since the occupation of the country, foreign troop numbers have increased. George W. Bush, on his way out of what can only be considered one of the most disastrous Presidencies of US history, only recently announced a further surge of US troops refocusing his war on terror to this region (which has also led to illegal air raids into the territory of Pakistan).

“The more subservience the US demands from its allies, the more volatile their domestic legitimacy becomes” Yet despite this heightened military activity, the neo-Taliban have stepped up their military campaigns as well. In the past few months, the Taliban have extended their insurgency into Afghan cities, including the heavily fortified capital Kabul. Indeed, the British Ambassador to Afghanistan, Sir Sherard Cowper-Coles in a leaked exchange with Francois Fitou of the French Embassy in Kabul was quoted as saying that the US strategy in the country is destined to fail and that increasing troop numbers would identify us even more strongly as an occupation force and would multiply the targets for the Taliban. Brigadier Carleton-Smith, the senior British commander in Afghanistan was equally adamant to make it implicitly clear to the US that we’re not going to win this war, (see The Sunday Times of London, 28 September 2008). The only acceptable solution for the quagmire in Afghanistan, Cowper-Coles reportedly said, would be an acceptable dictator.

IS AFGHANISTAN ONLY THE EPICENTRE OF THIS WAR?

“For the Afghan people the situation is dire” If anything the war is spreading and neighbouring states are paying the price for the blunder. Asif Ali Zardari, the new President of Pakistan, is now at the receiving end of two security threats: unauthorised trans-border raids by the US Army and the terror campaign unleashed on the country by the al-Qaeda-Taliban alliance. The more subservience the US demands from its allies –Pakistan, Saudi Arabia, Egypt, Jordan– the more volatile their domestic legitimacy becomes. The insecurity in Afghanistan has a profound impact on Iran too. The cultivation of poppy plants and the production of opium have increased ex-proportionately since the occupation of Afghanistan. The Iranian army, aided by the United Nations, has been fighting a losing battle against drug trafficking gangs, who smuggle heroine, cocaine, crack and all sort of other drugs into the country and from there via Turkey to the streets of Paris, London, Berlin, Rome and Madrid.

For the Afghan people the situation is dire. They have the choice between the foreign occupiers whose slogans of freedom and reconstruction ring hollow after seven years of war and destruction and the Taliban terrorists, hordes of angry man from all over the world who maraud the human capital of the country in the name of a higher ideal that most Afghans have rejected a long time ago. In all of this the Afghan story is a sad one- All the more disturbing that there are so few people who are committed to tell it.