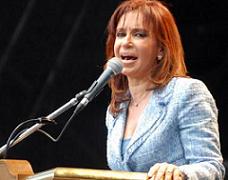 Cristina Fernández resumed the offensive on the international plane and will begin a long period of trips to consolidate Argentinean export markets. The destinations will include African, European, Latin American, and Asian nations, and this frames her policy of the reinsertion of Argentina into the international stage, firmly announced during the presidential campaign.

(From Buenos Aires) AFTER THE SIGNIFICANT STEP of the president of the Argentinean Republic, Cristina Fernández de Kirchner, at the 63rd General Assembly of the United Nations (UN), she returned to ask for the extradition of the Iranian citizens implicated in the brutal attack on the Mutual Argentinean Israeli Association (MAIA) of July 18, 1994. Fernández de Kirchner likewise reaffirmed the sovereign Argentinean Rights on the Falkland Islands and ratified the Treaty on the Forced Disappearance of People; moreover, he supported the multilateral policies that are given today in South America.

In New York, the Argentinean Government announced a series of official visits to distinct European, African, Asian, and Latin American countries, which frames the policy of the reinsertion of Argentina into the international stage, firmly announced during the presidential campaign at the end of 2007.

In a marathon tour, that will begin on November 16 and will extend until the 22 of the same month, the Argentinean president will visit Cyprus, Algeria, Morocco, Egypt, and Libya. “Argentina exported to Egypt 560 million dollars; to Algeria, for 453; and to Morocco, for 200”

In Cyprus, she will attend a bilateral meeting with President Tassos Papadopoulos. She also anticipates finding herself with Argentinean troops that are serving with the Blue Helmets (UN Peacekeeping Forces) and will visit the community of San Egidio, a powerful catholic firm, obligated to the defense of human rights.

Some days later, she will undertake a brief, but intense, tour to Magreb, which will begin in Algeria, where the president will meet with President Abdelaziz Bouteflika; she will continue to Morocco to confer with King Mohamed VI; and on the 18th and 20th, she will be in Egypt, where she will see President Hosni Mubarak.

The most noticeable of this tour, there will be a bilateral meeting held in Libya, with President Muhamad Khadafi on the 22nd of November, and later return to Argentina.

Libya, after its political reorientation, transformed into one of the most desired countries by different governments and occidental businesses, due to its petroleum production and by showing one of the highest standards of life in all of Africa.

The central idea behind these visits is to strengthen the Argentinean politics given by the ex-president Néstor Kirchner, whose objective is to diversify the Argentinean exportations to new markets.

Following the of foreign trade published by the Organization of Statistics and Census the Argentinean government, the Indec; in 2006 they exported to Egypt 560 million dollars; to Algeria, for 453; and to Morocco, for 200. In comparison, Libya only contributed 60 million dollars to their exports.

The president of Argentina is going to accompany a very well nourished delegation of Argentinean businesses. And not only that, in another plane, a large group of the PyMes (Small and Medium sized businesses), that are equal to the larger counter parts, are going to be travelling and are going to intend to cut off business with their African pairs.

Following the same political-commercial objective, the Argentinean president is going to visit El Salvador, the 30th and 31st of October, Chile, 4th and 5th of December and Brazil, the 15th to the 17th of December. “The prominent visits are going to be destinations like Russia, India and the first official visit to Spain”

On the other hand, the most prominent visits that are going to be made by the Argentinean in the next four months are going to be destinations like: Russia, the 8th and 9th of December; India the 4th and 5th of February of 2009; and, the notable first official visit to Spain after the crisis that played a leading role in the affairs of both of those countries, of the profound historical relation, for the destination of the business Aerocommercial, Argentinean Air Lines, and that it was sustained between the Argentinean State and the consortium Spanish business Marsans. The same will be carried out between the 9th to the 11th of February, 2009.

THE VISIT BY ABDULÁ AND CALDERON TO BUENOS AIRES

In the case of the first official visit to the ruling government of Argentina to Russia, “Cristina Fernández de Kirchner is going to receive in Buenos Aires the king Abdulá of Jordania, in an important commercial venture” the same motivation can be found in the authorization of the giant Asian-European, to share Argentinean fruits and meats and also it is the view-from the Russian side-what part of a political-commercial offensive towards Latin America, that was born after numerous signed agreements between this country and Venezuela; this nation is going to maintain, next November, the first naval maneuvers from the disappearance of the ex Soviet Union.

But, this reinsertion of Argentina in the world, not only takes place in the framework of the trips that are going to be undertook by the big boss of the Pink House. The 20th of October, the president Cristina Fernández de Kirchner is going to receive, in Buenos Aires, the king Adulá of Jordania that is going to arrive to these lands with an important commercial mission, the 24th of November, they await the visit of the head of state from Mexico, Felipe Calderón, to turn a new page between the relations of Argentina and Mexico, after suffering numerous fruitless encounters in the last few years.