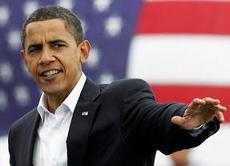 The impressive machinery for incorporating new voters set in motion by Barack Obama is unprecedented in the history of American party politics. In this way, the Illinois senator and potential president of the United States has achieved, by virtue of his innovative instinct, the reinsertion into the democratic system of a considerably significant contingent of decitizenized Americans, members of the conglomerate of millions of newly registered voters. Main Street elects Obama by a large majority.

(From Madrid) JUST HOW UNDEMOCRATIC can electoral absenteeism come to be? The corollary to this question is the massive emergence of voters that will take part in elections for the first time, heeding the Democratic Party’s call for the upcoming American elections, and thereby confirming the candidate Barack Obama’s prediction that he would restructure the electorate.

The impressive machinery for incorporating new voters set in motion by Barack Obama is unprecedented in the history of American party politics. In this way, the Illinois senator and potential president of the United States has achieved, by virtue of his innovative instinct, the reinsertion into the democratic system of a considerably significant contingent of decitizenized Americans, members of the conglomerate of millions of new registered voters (for the moment, the total number of registered voters in the 50 States is not available; however, there are registers of new voters taken state by state, with several million new voters in each one).

Sixty one percent of this population prefers Obama, against a Pyrrhic 30 percent that sympathize with McCain. With their incorporation, some of these future voters will challenge Republican predominance. For an example of this, one only needs to mention the already expressed preferences for the blue party candidate among the 4 million newly registered voters in twelve states that voted for George Bush in 2004. “In the state of Pennsylvania, 474,000 new Democrats are now on the electoral register, while the Republicans suffered a loss of 38,000” Eleven of those states currently favor Barack Obama: Ohio, Florida, Virginia, North Carolina, Indiana, Georgia, Missouri, Colorado, Iowa, Nevada and New Mexico, according to an article published recently in The Washington Post by Alex MacGillis and Alice Crites: Registration Gains Favor Democrats. The Democratic gains in some traditionally conservative states like Florida have more than doubled.

According to statistics published by The Washington Post, of the 800,000 people registered for the first time through the first of September in the state of Florida, 316,000 joined the Democratic Party, while only 129,000 registered as Republicans; the rest maintained their independent status. The difference between Democrats and Republicans in this state with respect to the number of newly registered voters is a half million potential voters in favor of the former. It looks like the same story is unfolding in North Carolina, where the Democrats outstripped the Republicans with 208,000 new voters to barely 34,000. There is no magic in this arithmetic; as the source stresses, a significant component of this group is voters who are considered minorities, that is to say, African Americans and Hispanics that now back Obama. In the state of Pennsylvania, 474,000 new Democrats are now on the electoral register, while the Republicans suffered a loss of 38,000.

Still more illustrative is the case of the state of Nebraska, “A large percentage of these individuals are not voluntary abstainers as much as they are absentees; that is to say, decitizenized American nationals” which has not voted for a Democrat in the presidential elections since the Roosevelt administration in 1936, but now, thanks to the fragmentation of the electoral districts, offers a niche that Obama strategists have exploited to win some votes. They set up an office, and during its first day in operation it registered 1,113 volunteers as activists in its proselytizing campaign.

This is a case in which what appears to be a mere mechanism in turn introduces a change in content. The incorporation of these voters, many of them African Americans and young people that will be going to the polls for the first time, hints at a painful underlying reality in the heart of American democracy: the Republicans succeeded in gaining control and maintaining it on the basis of a shameful exclusion of 36 percent of the citizens that had the potential, but not the right conditions, to exercise their electoral vote.

This statement must be qualified. A large percentage of these individuals are not voluntary abstainers as much as they are absentees; that is to say, decitizenized American nationals, if we assume that the most explicit indicator of citizenization is the ability to vote. The data suggest that this 36 percent was absent in the last elections and previous ones for many reasons, for example, because the conditions needed to register them in the electoral register in their voting areas were not fulfilled (as would be the case with the majority of the people displaced by Hurricane Katrina in New Orleans).

APATHY TOWARDS THE POLLS

“The exclusion of young people, Hispanics, and African Americans from the electoral register has the purpose of reducing the number of votes for the Democrats” Young people, Hispanics, and African Americans have consistently been excluded from the electoral register, with the obvious purpose of reducing the number of votes for the Democrats, given the known preferences of these groups. Furthermore, when the number of voters is limited, the weight of the bases of the Republican Party increases, above all the white evangelical Christian component, which is the most politicized, organized, and disciplined in its selection. The white evangelical bloc has been crucial in cementing the Republican platform, given that it is the only demographic group that, at this point in time, still continues to support the presidency of George W. Bush and the war in Iraq. An increase in registered voters in the states with a strong white evangelical preference, like in the cases of Virginia and North Carolina, could dilute the impact of their regimented voting. The fact that the polls indicate that Obama holds a slight advantage in the two aforementioned states that in 2000 and 2004 voted overwhelmingly for George Bush, shows the success of the senator from Illinois’ recruitment campaign.

In this sense, there is nothing more authentic in this popular pull headed by Barack Obama than the guarantee that the people can responsibly exercise their citizenship, registering themselves and taking part in politics, during times when it is precisely the citizens themselves who feel excluded from the solutions that the economic, political, and above all, private business leadership is providing in view of the economic debacle affecting this country, which precisely began not where it has ended up, in the heart of Wall Street, but in the backyards of the Regular Joes, those who live on what Obama has correctly termed Main Street.