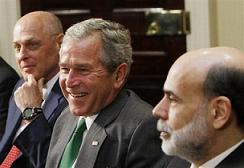 Various financiers on Wall Street completely went against the idea of social business responsibility. They tried to maximize profits in the short term, without paying any attention to social damage. The world’s most vulnerable people are already paying the price for this extremely serious global crisis. Ethics must begin to govern the economy once again. Urgently.

(From New York) THE GREATEST CRISIS IN MODERN ECONOMIC HISTORY since the Great Depression of the 1930s. Some of the principal investment banks in the largest economy in the world have been closed, the two largest mortgage brokers, as well as the biggest insurance company, have been nationalized, the largest savings and loan bank has been rescued, and bank deposit guarantees have been increased by 150 percent. The effects have spread to the states and municipalities. New Mexico, Maine, Massachusetts and California have serious liquidity problems. Among others, the municipality of Jefferson, Alabama is on the verge of suspending payments, and that of San Mateo, California, has lost 155 million dollars that it had in Lehman Brothers, and may run out of money to finance public schools. The impacts are spreading to Europe, Asia and other parts of the world.

One of its main causes is an ethical tsunami. Adam Smith, the father of classic economics, warned some centuries ago that markets should be governed by ethical values like honesty, prudence, transparency, and mutual confidence. Otherwise, they could function very poorly. Profound ethical vacuums lie at the bottom of the unfolding crisis.

Among them are the following:

Various financiers on “CEOs were earning 344 times as much as the average worker, and their incomes were 1,700 times greater than the minimum wage” Wall Street completely went against the idea of social business responsibility. They tried to maximize profits in the short term, without paying any attention to social damage. Among them, the speculators that brought the profits to a sum three times that of the subprime mortgages, the promoters of the subprime mortgages, and the short term speculators that did what they could so that even more of the stocks of the troubled banks would fall.

Upon announcing the hitherto unheard of measure of banning the short-selling of 800 stocks, the chairman of the U.S. Securities and Exchange Commission of the United States, Chris Cox, said that the measures were necessary in order to ensure that hidden manipulation, illegal naked short selling, or illegitimate trading tactics do not drive market behavior and undermine confidence. In England, referring to the same subject, the Archbishop of York, John Sentamu, stated, they are bank robbers, and asset strippers.

They were earning 344 times as much as the average worker, and their incomes were 1,700 times greater than the minimum wage. The analyses show that the pursuit of greater percentages and shares brought the businesses to take the greatest risks. It was one of the common people’s (Main Street) most popular arguments for questioning why they should help Wall Street.

“A certain idea of globalization is dying with the end of the financial capitalism that has imposed its logic on the whole economy” The ideological dogmatism left extremely sensitive and risky markets like non-bank financiers without regulations. The New York Times has posited in an editorial: the crisis could have been averted if the regulators had applied the rules, and the government employees had questioned the risky loans, and other doubtful practices.

The French Prime Minister, François Fillon, called upon Washington to act: we will not agree to pay for damage brought on by failed regulation and the corruption of capitalism. The Archbishop of Canterbury, Rowan Williams, wrote that putting too much confidence in the market has become a sort of idolatry, and he demanded regulations.

THE RETURN OF ETHICS

“It is time to fight hard for ethical responsibility in public policies and the defense of collective interests, and for the social responsibility of private business to move forward in an effective manner” The idea that we have gone too far in removing ethics from the economy, and that it has unleashed savage forces, appears today in some of the biggest pro-market leaders.

The Italian Prime Minister, Silvio Berlusconi, suggested that we must begin to apply ethics to the economy again, and the president of France, Nicolas Sarkozy, stated that a certain idea of globalization is dying with the end of the financial capitalism that has imposed its logic on the whole economy, and contributed to its corruption.

The most vulnerable people in the world are already paying the price for all of these mistakes. The Secretary General of the United Nations, Ban Ki-Moon, has warned that the goals for the millennium, cutting extreme poverty (today 1.4 billion people), infant mortality (9.6 million children die annually due to poverty) and maternal mortality (500,000 mothers die every year during birth due to the factors of poverty) in half by 2015, are in severe risk.

Latin America has to learn some lessons from this. The mechanically copied economic orthodoxies have not only been erroneous recipes, but they have transmitted the message that ethical values do not matter in the economy, and that this is only the field of technical repairs. As opposed to the failures of that vision, it is time to fight hard for ethical responsibility in public policies, for the defense of collective interests, for the social responsibility of private business to move forward in an effective manner, for children and families’ right to develop, for opportunities for the youth, for protection of the elderly, and for greater equity in the most unequal region of all.

Just as the lack of ethics was crucial in the current serious crisis, it is essential that ethics drive the economy in order to be able to overcome the sharp inequalities and the exclusion in Latin America and the world.