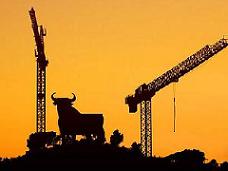 If Spain continues to construct an obsolete and dysfunctional model on top of the ruins of its acknowledged failure, it will end up accepting its sad fate as a poor service country relegated to the fringes of the global economy. This will translate into a dip in the country’s general wellbeing.

(From Bogota and Madrid) AS SOON AS the outline of the recent international economic crisis was discerned, alarms went off in the Spanish economic model. Unemployment and inflation rose; the economy in general slowed down; tourist activity, the star sector of the Spanish economy, slumped; construction stopped dead in its tracks and the prices on the real estate market began to fall steadily.

“We are just barely an industrial country, and the little that is produced is expensive and of poor quality. We have a severe foreign dependence on raw materials” In a country that, for years, has based its economic growth on its real estate sector, with high doses of deregulation, excessive speculation and a banking system that has hyper-mortgaged practically the whole country beyond what it could handle, it was logical that –in a situation such as the one we are now experiencing– it would show the first signs of the crisis.

It collapsed like a house of cards, and the catastrophe, as will be seen in the next few months, has only just begun; so many years of mistakes and blunders cannot be fixed with phantasmal European and American five year plans. And yet they believe in them. Are they living in the idealist age of Lenin and his failed new political economy for the USSR?

This is a very negative and unfavorable landscape, with fatal consequences in every sector, since the country’s economic slowdown short-circuited the entire economic structure. “Aside from the fact that Spaniards don’t work very much, when they do work, they work poorly. Spanish products are much more expensive than those from the rest of Europe” Still, we must add to it the very characteristics of an obsolete and dysfunctional model, one that exhibits a growth rate characteristic of the Third World. We are just barely an industrial country, and the little that is produced is expensive and of poor quality. Spain has a severe foreign dependence on raw materials, and high labor costs for the scarce products that it produces, especially when compared to Asia’s emerging markets and vigorous economies. Spain is not capable of competing with the new markets; it is out of the game.

And many of these structural defects have a lot to do with the very idiosyncrasies of Spaniards, and their poor work ethic. Endless vacations, long weekends, parties, Christmas, Easter week, local celebrations, hangovers, summer vacations taken at any time of the year and an endless supply of not-so-discreet ways of doing nothing. The simple goal: to not work. Our lifestyle, totally unproductive and, of course, not competitive at all in the international economy, must be revised if we really want Spain to play in the big leagues and be a first class country. It is another thing if we want to resign ourselves to being a poor economy in this globalized world, “As for tourism, for the last few years Spain has been banking on its Third World quality and clear mass marketing: poor quality and high prices” in which the disorder of our daily life and economy will make us deserving of a sad fate.

Aside from the fact that Spaniards don’t work very much, when they do work, they work poorly. Spanish products are much more expensive than those from the rest of Europe. Even our wines are not competitive anymore; if you go to an English supermarket you will see how Greek, Bulgarian and Romanian wines are much less expensive and of an acceptable quality. It is the same with our other products, not to mention the prices in our bars, restaurants, and hotels, which are already almost the most expensive in Europe, except for maybe those found in France and the United Kingdom. They have turned our service sector, once the flagship of the Spanish economy, into something pricey, lacking in transparency and completely uncompetitive. And this is all occurring at a time when, both in and outside of Europe, tourist markets that are much cheaper, livelier and more dynamic with regard to their marketing and development, are emerging. As for tourism, for the last few years Spain has been banking on its Third World quality and clear mass marketing: poor quality vacation packages that carry hefty price tags. Who offers less and asks for a higher price?

And then “After this grave and acute crisis in the international capitalist system things are not going to return to being the way they were” there is the speculative issue, the motor of an economy that based its growth on a real estate bubble, which is now proving to be its Achilles’ heel. It is clear that banking on said formula for years brought about the current mayhem. In short, it is the product of the unsoundness of an already obsolete model not conducive to modern and dynamic growth. It is true that all of the players involved –the banks, private individuals, mere spectators, appraisers, even the administration– participated in it and contributed to the bubble’s inflation. Yet it is no less certain that this economic growth, whose official figures have been exaggerated since the goal is always to show our economy at its best –even though it is not headed in a good direction– benefited a very small sector of society. Furthermore, in the long run, as is being seen with the increase in the level of defaults, “The level of Spain’s indebtedness has been extremely high. The norms and the criteria will need to be changed, and the financial system equipped with more rationality and objectivity” the growth will create social tensions and serious problems for those with mortgage debt, which has not stopped growing during the past few years.

And so, appealing to the old Leninist question, what to do in the present circumstances? It is clear that after this very grave and acute crisis in the international capitalist system, things are not going to return to the way they were before. This is true for Spain as well. A change in the banking world that affects its structures, its modus operandi and the form in which it carries out its credit operations will be necessary, since the crisis reveals its structural weakness, and even its boundless irresponsibility, for lack of a better description. In this respect, the level of Spain’s indebtedness has been extremely high, and the norms and the criteria will need to be changed, and the financial system equipped with more rationality and objectivity. A serious and reasonable effort will also have to be made, without counting on obsolete and governmentalized labor unions, to carry out a labor reform to make the Spanish workforce more competitive, cheaper, more hardworking and more productive: something that it is not right now, no matter how much some people try to justify themselves with self-complacent sophisms regarding their alleged work ethic.

Finally, and as a way of summarizing, it will be necessary to implement a new work culture, one that Spaniards are exposed to during their formative years, and one that tries to generate a spirit of efficiency and collective responsibility in business. Enough already with this crude pre-Marxist philosophy of master and servant. This culture must constitute a serious effort to turn Spain into an international power, which will imply, of course, legislative reforms, structural changes in our mode of production and, above all, working more. And working more efficiently.

On the contrary, if we continue to reconstruct an obsolete model on top of the ruins of our dysfunctional and acknowledged failure, Spain will end up accepting its sad fate as a poor service country, relegated to the fringes of the global economy, and far removed from the big decision-making centers. This will obviously translate into a dip in our quality of life and general wellbeing. It is up to us to decide. It is time for self-criticism.