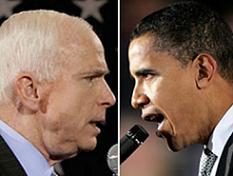 The global economy is not the only thing going through a crisis; that also occurred in the Nineties. What is happening now is that an entire model is being questioned. Although the campaign has been drained of content, it is Barack Obama who offers more solutions for the approaching change.

(From Madrid) ONE OF THE MOST remarkable consequences of the economic crisis pummeling the whole world is the American presidential campaign being emptied. From an argumentative and content point of view, the campaign had not gotten very far and, not without reason, the two main candidates consistently used this fact to criticize each other, as did many commentators. In the United States and the majority of democratic countries, the peremptory necessity of those aspiring to elected posts to win the votes of the unenthusiastic, centrist, moderate, irresolute and indecisive voters systematically pushes them to avoid making any concrete commitments and to make their electoral platforms less substantial. “More than a contract, which in short is what a platform is, people were searching for someone that they could put their confidence in, trusting everything to the candidate elect’s credentials”And if necessary, it causes them to send contradictory messages in order to satisfy one or the other and not get his fingers caught in a bind.

The problem can be traced to a low level of promises, and only a patient and laborious perusal of the speeches, interviews, and debates throughout the entire campaign would allow the most interested to reconstruct something resembling a platform. And even this platform would not cover every topic, in fact, far from it. Hence, the meat of the debate was both personalistic in nature and image-focused; the candidates were searching for a consolidation of their own charisma that would encompass everything: both the concrete and the gossamer. The truth is that, as Celeste López correctly reminds us, in the political psychology of Americans, contrary to that of Europeans, certain aspects like each candidate’s surroundings – especially the family – and private behavior carry a lot of weight when it comes to providing support for his or her commitments and ideas. Sarah Palin’s journey has demonstrated this over and over again.

THE WORD IS IMAGE

More than a contract, which in short is what a platform is, people were searching for someone that they could put their confidence in, trusting everything to the candidate elect’s credentials. Barack Obama based the acceptance of his promises of change without specifying very well what that change really was, aside from a shift away from President Bush’s leadership. John McCain, in turn, simply used his patriotic values and his assurance that he would not partake in any socialistic ventures as his guarantee. “McCain’s attitude demonstrates just how monumental this mess really is: at first he opposed the plan, then he supported it, and in the second debate with Obama he proposed setting aside another $300 billion more to buy up mortgages” In explaining its endorsement of Obama, the New York Times said on October 23 that he has grown as a leader and put real flesh on his promises of hope and change, and that he has drawn in legions of new voters with powerful messages of hope and possibility and calls for shared sacrifice and social responsibility, and that he has shown a cool head and sound judgment. We believe he has the will and the ability to forge the broad political consensus that is essential to finding solutions to this nation’s problems.

A leader, promises of hope and change, shared sacrifice, social responsibility, a cool head, sound judgment, consensus: this is what Obama offers instead of plans. Likewise, in explaining its decision to move away from McCain, the Washington Post mentioned that the picture of Mr. McCain that emerged this year is far from reassuring. Image, that’s the word.

However, the crisis has not even left that; from the very beginning, the great defenders of neo-liberalism currently in power, starting with President Bush himself, have adopted the despised Keynesian formulas and have turned to stark State interventionism, revaluing what were, up until now, rival ideas. In any case, the confusion is global and doesn’t only affect the measures already taken, especially the famous $700 billion rescue plan. McCain’s attitude demonstrates just how monumental this mess really is: at first he opposed the plan, then he supported it in the second debate with Obama on October 7, even proposing to add $300 billion more to the plan in order to buy up unpaid mortgages.

And with this being as serious it is, it is still not the worst. Everyone already recognizes that the worst has probably yet to come. “Without knowing where exactly we are or what it is that is sinking, it is hard to make credible and sensible campaign promises that are committed to the truth” Big and painful decisions will have to be carefully made, decisions that nobody would dare to predict, and especially not the candidates in the middle of their search for votes. The analysts of the crisis do not go beyond stating that, at best, its financial drift has been stopped. For the rest, the powerful swings of the stock market and the tremendous difficulties that some countries are going through make any short or medium term forecasts uncertain. In a nutshell, nobody can say with any type of certainty what is going to happen.

And this is not only about making economic forecasts, but also about reconstructing valid social and political values trends and behaviors. The global economy is not the only thing going through a crisis; that also occurred in the Nineties. What is happening now is that an entire model is being questioned, even though some still defend the validity of an executive or directive management archetype based on risk and quick (and easy) money, which in the past few years drove middle class Americans, Europeans, Asians, Arabs, Latin Americans, etc, into a frenzy. “Obama, the New York Times says, offers more possibilities and more openings for the change that is approaching” We are already being told that we’ll have to hit rewind, without it being made explicit where we must go back to, or in what direction we should head afterwards. Without knowing where exactly we are or what it is that is sinking, it is hard to make credible and sensible campaign promises that are committed to the truth.

Barack Obama, the current favorite, boasts – and with good reason – of having an economic team that includes many former collaborators of ex-President Bill Clinton (Bob Rubin, Larry Summers, Paul Volcker, Laura Tyson, Gene Sperling, Dan Tarullo, etc), but to the media and the people on the street, sharp slogans concerning what can and must be done to put this massive mess in order just aren’t enough. This is especially true when we keep in mind that, besides, what is decided will necessarily have to involve a resolution of the conflicts that have been lingering for decades, from poverty and the destruction of the environment to an effective fight against organized crime and its allies: tax havens.

Because of all of of this, this campaign has been emptying itself since the summer, and it has been becoming more and more personalistic. “If the crisis is destroying the old order created over 30 years by Ronald Reagan, George Bush Sr., Bill Clinton and George W. Bush, how is the content aspect of the ongoing electoral campaign not going to sink?” Of course, a lot of this had to do with the personality complex strategy of McCain and, above all, Sarah Palin, as shown by Jon Meachan’s devastating commentary on her (The Palin Problem) which, by the way, was refuted by Karl Rove. Even the big bomb so characteristic of the last days of presidential campaigns has not yet been dropped, surely because it would not manage to outdo those that the citizens are currently bombarded with everyday.

In this charisma showdown, against the backdrop of a runaway and multifaceted crisis, it looks like Barack Obama is prevailing, not for his plans, but because, as the New York Times says, he offers more possibilities and more openings for the change that is approaching, the change that he has promised us from the very beginning of his presidential bid, only referring to the administration and not the whole world.

Whoever the winner of this electoral contest ends up being, he will ascend to the presidency with his hands tied, and some good proof of this is the G-8 and G-20 summits scheduled for November 15 in Washington with the purpose of founding a new capitalism, according to the announcement of one of its promoters.

This is to say, that the decisions will be made with the president in pectore; he will not be a silent guest, but will rather be put in charge of carrying out the agreements that are reached. With this outlook, why engage in hair-splitting debates regarding the immediate future that the outgoing president – who, by the way is one of the most unpopular and least prestigious in the history of the United States – will paradoxically design (along with others)? Meanwhile, as Antonio Núñez points out, they are going to fill the campaign with stories in order to give it a formal cohesion.

If the crisis is destroying the old order created over 30 years by Ronald Reagan, George Bush Sr., Bill Clinton and George W. Bush, how is the content aspect of the ongoing electoral campaign not going to sink?