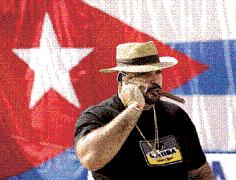 Cuban society has serious problems that will not be solved with either the end of the dictatorship or the lifting of the American embargo against the island’s government. The author says that the double standard in which generations of Cubans have been educated in order to survive is a scourge that will in some way jeopardize the quality of the nation’s future democracy.

(From Montevideo) CUBAN SOCIETY HAS SERIOUS PROBLEMS that will not be solved with either the end of the dictatorship or the lifting of the American embargo against the island’s government. The double standard in which generations of Cubans have been educated in order to survive is a scourge that will in some way jeopardize the quality of the nation’s future democracy. This phenomenon is universal, but on the island it has been strengthened to an alarming degree, and it conspires to build a healthy society. “The citizens, including those in the government, do not say what they think, for fear of reprisal” In George Orwell’s classic piece of British literature, 1984, the author warned about the double talk of totalitarian societies as being one of their detestable characteristics, and the book was written back in the 1940s.

For almost a half century, the average Cuban citizen has developed a clear double standard as a modus vivendi in order to get around the regime’s controls, not only in the political ambit, but also in its daily economy and culture, and even his or her own personal life. Survival became an occupation, which even allowed many to ascend the ladder of the decomposed social scale of a regime that demands unrestricted unanimities, uniformities and loyalties more than it does critical and freethinking citizens.

They think one thing, but they say something else. Or they remain silent, because opinions that go against the thought of the single-party regime can bring more trouble than help to the average citizen. The majority of Cubans follow this rule. The citizens, including those in the government, do not say what they think, for fear of reprisal.

The average Cuban’s ambivalent public speech, not including those exceptions that could result in exile, prison or a life of living as an outcast in one’s own land, constitutes a survival and defense mechanism against a regime that, beginning in the Sixties, “The search for a new Utopian man ended up undermining society” implemented Marxism-Leninism as the society’s guiding philosophical current upon which citizens completely depend in order to be able to work and study, among other basic activities.

This double talk is a part of any repressive and dictatorial society. In the old socialist camp the double standard was an integral part of many people’s lives. Right before the fall of various governments in Eastern Europe, hundreds of thousands cheered their leaders in planned public protests repudiating capitalism. However, soon after, the same protesters jeered at them in the streets. Workers became employers overnight, and communists became capitalists, in spite of decades of official indoctrination.

In Cuba, starting in the first months of 1959, when the government dictated that criticizing the State meant being a traitor, “They sing The Internationale and raise their fists, but they pay in dollars for the food and products made in the USA that are sold in the government stores” a CIA agent, anti-Cuban and a swine, the people adopted the double standard as a lifestyle. From then on, they went about perfecting it, according to the regime’s swings.

The search for a new Utopian man ended up undermining society, with the citizens hiding behind double talk, waiting for new times to come, while their old and new troubles remained unresolved.

Once the same militants and officials of the Cuban government, who in their meetings habitually condemn the so-called black market, get home and find their pantries empty, they have no other option but to turn to the so-called bisneros in order to obtain the basic goods for their families.

Expressions like sociolismo, merolicos, macetas and bisneros, and the magic word, solutions, are part of the vocabulary of a society in which many values have been relegated to the background in the daily struggle for things as simple as breakfast, lunch and dinner.

DOUBLE TALK ON THE GOVERNMENT’S PART TOO

A Cuban friend of mine who lives on the island described it to me masterfully. In the morning they protest imperialism in front of the United States Interests Section, and in the evening they talk to some relative exiled in Miami on the phone, begging him or her to urgently send them American dollars so that they can survive. “Today the Cuban regime is also a victim of the double talk in which generations of Cubans, including the ruling class, have grown up” They sing The Internationale and raise their fists, but they pay in dollars for the food and products made in the USA that are sold in the government stores.

An individual values crisis occurs when a man finds himself in a dead end alley and appeals to ethic suicide. He renounces the essential values of his human condition because he is trapped in a society with an uncertain future.

Today the Cuban regime, the product of its connivance with this double standard created to avoid social disturbances that could question its quasi autocratic power, is also a victim of the double talk in which generations of Cubans, including the ruling class, have grown up.

“The double standard, which silences the entire Cuban society and attacks its very foundation, makes fun of the government’s triumphant discourse, and sticks to the power too” The grave economic situation and shortages on the island, caused by the awful management of its administration and the failure of the socialist model – and not only by the embargo and the consequences of hurricanes – have led to an increase in theft, corruption and speculation.

Although for the Cuban government the shortage of food is the result of the embargo, the United States has become one of the principal suppliers of food to Cuba: the Cuban regime annually buys more than 500 million dollars worth from American companies, and since 1991 it has been able to buy important medicine from its powerful northern enemy to strengthen its weakened public health care system. The only condition is that it has to pay in cash. Jimmy Carter, former President of the United States, defined the situation best. In spite of being opposed to the embargo, the Democrat said in front of Fidel Castro at the University of Havana in 2002 that Cuba could buy what it needed from the other 180 countries with which it maintains commercial ties, and at prices even lower than those of the United States.

The double standard, which silences the entire Cuban society and attacks its very foundation, makes fun of the government’s triumphant discourse, and sticks to the power like a boomerang.

A CRUSADE AGAINST THEFT AND SPECULATION

The crisis has reached the point where Raúl Castro’s government announced that it will punish with an iron fist the speculation of food prices and the theft of the State’s resources that have taken place during the past few weeks.

The district attorney has asked the courts to impose the maximum sentences established by the penal code to sanction these crimes; “Cuba imports 80 per cent of the food it consumes, and this year it will set aside 2.5 billion dollars for these purchases, 1.1 billion more than in 2007” this includes years of imprisonment, reformatory work and the confiscation of the bank accounts that are the product of illicit business activity.

The authorities have also detected speculation and food theft on the black market, which trafficks medicine, tiles, electrical and telephone cables and other construction materials stolen from the State.

The official crusade against theft and speculation, accompanied by a strong media campaign, includes the reinforcement of controls on the markets, businesses and entities, above all of the food sector, and it involves police officers, agents of the Ministry of Interior and state inspectors.

The theft of products such as fuel, construction materials and equipment from department stores and state entities feeds a giant and historic black market, which began to grow during the economic crisis of the 90s, and to which Cubans turn daily because store prices are high for an average salary of some 17 dollars.

Cuba imports 80 per cent of the food it consumes, and this year it will set aside 2.5 billion dollars for these purchases. This is 1.1 billion more than in 2007, but after the impact of hurricanes Ike and Gustav, which decimated crops and incurred 5 billion dollars in damage, it is anticipated that the needs will be much greater.

Cuban society is suffering the same shortcomings that afflicted the countries that, between 1989 and 1991, decided to abandon Marxism-Leninism as a political system. These same shortcomings also brought China and Vietnam to opt for the capitalist way in the economic field, in order to be able to feed their inhabitants. “It is difficult to leave poverty behind when you are stuck in a school of thought where a free flow of ideas does not exist. In order to make progress, societies need freedom of thought and actions”

In 1992, shortly after the collapse of the Soviet Union, one Cuban general put it this way during a Communist Party meeting: he had to choose whether to take the beans or the tanks to the streets. He said that he would prefer to take the beans. Repression or feeding the people.

But it is difficult to leave poverty behind when you are stuck in a school of thought where a free flow of ideas does not exist. In order to make progress, societies need freedom of thought and actions. Civil society, its institutions and efficient companies – whether they be large or small, family-run or institutional – that produce, provide work and pay taxes are not created from a five-year plan designed by bureaucracy, which in many cases has come to a standstill due to years of corruption. They are created by people who take the initiative, and have ideas and aspirations. Free and thoughtful people. The economy is much more complex than military headquarters, where everyone salutes the commanding officer.

The authoritarianism of the Cuban government is counterproductive because it seeks a false unity, which in turn depends on simulation and the ossified double standard, from top to bottom. The supposed unity hinders thinking and acting normally during the day-to-day life of any political and economic process.

In his book The power of the powerless, the Czech intellectual Vaclac Havel states that not only does the system alienate humanity, but at the same time alienated humanity supports this system as its own involuntary master plan, as a degenerate image of its own degeneration, as a record of people’s own failure as individuals. For everyone, there is a pinch of satisfaction in blending in with the anonymous masses, in sleeping comfortably in the bed of the unauthentic life.

In order to search for a way out of the Cuban crisis, one must begin with the ethic revaluation of the individual by means of a search for that individual conscience, which involves leaving behind the double standard and using a new foundation upon which to draw up an ethical-social agreement with a truly human aspect, in which family life plays an important role. This is a challenge for the Cubans that will inevitably have to be met if they want to construct a solid democratic culture in the near future.