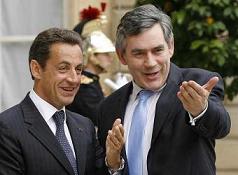 The rescue plan for the banking sector has transformed Gordon Brown into a British Flash Gordon, making him, even more so than Sarko, the true leader to follow during these times of uncertainty. Even so, he could lose the general elections.

(From Madrid) ACCORDING TO THE LATEST OPINION polls, Gordon Brown, who reemerged like a Phoenix from the ashes of public opinion in the wake of his decisive bank rescue program, has not quite managed to get airborne. The most recent data seem to indicate that British society, although relieved by the rapid response to the crisis carried out by its prime minister, “His popularity appears to have increased so much that his recovery has come to be compared to Margaret Thatcher’s in 1982” will not put its confidence in him during the next general elections.

The current financial crisis – so harmful for other political leaders – is having a rejuvenating effect on Brown’s moribund political figure. His rescue plan for the banking sector has won over much of Europe, and has been followed to a tee in the United States, which up until then had been averse to this type of intervention. This wise move has transformed him into the hero of the moment – Flash Gordon, according to the British press – making him, even more so than Sarko, the true leader to follow in these times of uncertainty.

We “Fewer than half of the voters would be willing to trust the Labour party to lift the country out of the crisis” are witnessing what numerous analysts have called a miraculous metamorphosis of Brown’s figure, from a clumsy politician without any holding power to a firm, charismatic leader who is sure of himself and able to joke and enjoy relaxed discussions with journalists.

His popularity appears to have increased so much that his recovery has come to be compared by some in the media to Margaret Thatcher’s in 1982, due to the Falklands War. However, up to what point does the British Prime Minister’s comeback signify a real political resurrection? The latest voting intention polls confirm the Tory Party’s 12 point lead over Brown’s party; in other words, this figure is identical to the one obtained after the Labour Party conference in September. This indicates that even the majority’s support of the British Prime Minster’s maneuver in view of the financial crisis has not managed to clearly improve his situation.

“The UK’s economy will decrease by 0.9 percent in 2009” Sticking to the new international economic scene, Brown describes opposition leader David Cameron as inexperienced, and at the same time boasts of his valuable experience to lead the nation during these turbulent times. Nevertheless, the opinion polls tell us that fewer than half of the voters would be willing to trust the Labour party to lift the country out of the crisis. In fact, the majority fault the government, and not the subprime mortgages from the United States, for the current unstable economic situation.

“The opinion polls show that the executive’s optimistic message is not enough to decisively shift the balance in his favor” The reality is that it does not look like Brown’s bank rescue plan will have a direct effect on mitigating the consequences that the economic recession will have during his term of office. The governor of the Bank of England, Mervyn King, has admitted that the United Kingdom will probably enter into a recession because of the current financial crisis.

Some data, confirmed by the National Institute for Economic and Social Research (NIESR), have predicted that the UK’s economy will decrease by 0.9 percent in 2009. This would mean the first complete year of recession since 1991. All of this has negatively affected the pound sterling’s value, which has fallen to its lowest level in five years: $1.62 to £1.

The swift fall of families’ income and the increase in inflation and unemployment have plunged the British population into a state of anxiety and fear.

Prime Minister Brown has stated that the United Kingdom can come out of the current economic crisis a stronger, more secure and fairer country, but the opinion polls show that the executive’s optimistic message is not enough to decisively shift the balance in his favor.

IN SEARCH OF A LEADER

Those “Let’s not forget that the British will not have to elect an efficient Minister of Economy, but instead a leader who embodies real change” that wanted to see in Brown’s interventionist initiative the turning point in his return to center stage perhaps understood that politics fluctuates with the same ups and downs of turbulent stock markets. But in the moment of truth, the fact is that Brown’s leadership is not convincing, and he will have to do much more if he wants to be victorious in the next general elections.

If not, he himself will dictate the day of his political death when he announces the date of the next general elections. What we have witnessed these last few weeks has been nothing other than the former Minister of Finance shining while carrying out what were really his tasks during the Blair decade. But let’s not forget that the British will not have to elect an efficient Minister of Economy, but instead a leader who embodies real change and is capable of inspiring as Prime Minister.