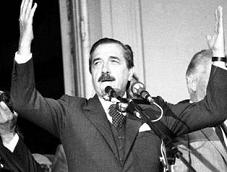 Twenty-five years after democracy’s comeback in Argentina, there is reason to celebrate, but there are also reasons to assume a necessary nonconformity and critically evaluate a reality that demands distinct answers and raises unresolved matters, says the author.

(From Buenos Aires) FOR ONE DAY, AT LEAST, ARGENTINA took a day of rest in order to celebrate and honor democracy, and not only to pass over it, as if it were a house that could be neglected forever, one in which there is constantly a lot of arguing and infighting.

That day was October 30, 2008 -a day of well-deserved celebration and society’s self-recognition- 25 years to the day after the elections of 1983, which returned to the country the constitutional rights and guarantees that had been infringed upon and sullied during the preceding decades.

RAÚL ALFONSÍN, THE ARCHITECT OF THE TRANSITION

This remembrance was, to a large extent, in homage of the person who has become a sort of living national hero for Argentineans and Latin Americans, transcending political and partisan differences: ex-President Raúl Alfonsín. “The presidency has been the principal motor upon which not only the course and luck of each government has depended, but also the political system as a whole” He was the principal architect of the transition begun in 1983, and the man who fought for and achieved, among other progressive initiatives that paved the way for the consolidation of democracies throughout the entire continent: the first proceedings against the former dictators for human rights violations, the Nunca Más (Never Again) report, definitive peace with Chile, the first integration agreements with Brazil and regional peace management groups, the constitutional reform that established the supremacy of international human rights pacts and conventions, absolute divorce, and the armed forces’ subordination to civil power.

The Argentinean democracy has been in power for twenty five consecutive years, and it has not reached said milestone in isolation. Rather, Argentina is part of a Latin American group of nations highlighting their virtues as a foil to the blood soaked events brought on by a long line of military regimes, dictatorships, massacres, and pillaging throughout the continent’s history.

Traditional presidentialism gave rise to the new democracies, but also to the very characteristics of the political culture, the evolution of the party and leadership system, and the government events that, throughout the past 25 years, went through – in different contexts and with a varying degree of success – comparable stages of ascension, stability, turbulence, crisis, and partial or temporary recoveries.

A LEADER WHO EMERGED FROM RADICALISM

This has been one of the major conditioning factors. “Reformed radicalism and reformist Peronism constituted the rejuvenated bipartisanship of the first years of the transition” The presidency (and the presidents) has been the principal motor upon which not only the course and luck of each government has depended, but also to a large degree the political system as a whole. Electoral support – and its variability over time – is an indicator of this constant, and it marks the political cycle just as well as the constitutional periods themselves do.

Alfonsín won the elections of October 30, 1983 with 51.7 percent of the vote versus the 40.2 percent of the Luder-Bittel Justicialist Party ticket. For the first time, Peronism lost a presidential election, and a leader emerged from radicalism and managed to put together an electoral majority coalition.

Alfonsín brought radicalism’s reform with him, and from there it was up to him to lead the refoundational stage, as president and as the central figure of the political process from 1983 onwards.

THE FIRST PEACEFUL TRANSFER OF POWER

As such, reformed radicalism and reformist Peronism constituted the rejuvenated bipartisanship that accompanied the first years of the transition. The Alfonsín government’s political energy peaked in 1987, when the Peronist reform -led, among others, by Antonio Cafiero, José Manuel de la Sota, and Carlos Menem- triumphed.

The Justicialism party’s internal elections in 1988 opened the gates for a new majority coalition led by Menem, which questioned the bipartisan model with a strong mark of caudillist and movimientist leadership.

The first change in government, from Alfonsín to Menem, on July 8, 1989 was traumatic, but at the same time it marked the first time in the country’s contemporary history that there was a peaceful transfer of presidential power from one of the main political parties to the other. In the May 14, 1989 elections, the Menem-Duhalde ticket obtained 47.5 percent of the vote, versus the 32.5 percent carried by the Radical Civic Union’s (UCR in its Spanish initials) Eduardo Angeloz-Juan Manuel Casella ticket.

Menemism was assigned the task of bringing in the nineties, which was -in its own way- Argentina’s answer to the challenges presented by the national crisis and globalization: a hyper-presidentialist and decisionist model to stand up to the neoliberal reforms that were proposed as a conservative-popular revolution. Thus, aided by the constitutional reform, Menem was reelected in 1995 with 49.9 percent of the vote. However, the second Menem government reached its apex and then began to run out of steam around 1997.

This is when the Alliance between the Radical Civic Union and Frepaso, to which the country turned in order to leave the nineties behind and resolve the problem of presidential succession, was preliminarily drawn up. And like so, the second transfer of power since the return of democracy took place in 1999, with the triumph of the Fernando de la Rúa and Carlos Chacho Alvarez ticket. The Alliance obtained 48.4 percent opposed to the 38.3 percent garnered by the PJ’s Eduardo Duhalde and Ramón Palito Ortega ticket.

THE BIRTH OF KIRCHNERISM

Disaster struck this short-lived coalition government experiment during the end of 2001, coming on the heels of successive pitfalls and De la Rúa’s resignation in the midst of social unrest. The Eduardo Duhalde -who emerged from the Legislative Assembly and completed De la Rúa’s term- period of 2002-2003 constituted the presidential government’s first experiment with parliamentary responsibility.

“As a product of that original crisis, Kirchnerism paved the way for the fragmentation and political blurring of Peronism and radicalism” The 2003 elections also witnessed a political first: Peronism was split into three distinct tickets and, under the (second round) recount rules, the ticket that obtained the second most votes ending up winning: the Néstor Kirchner-Daniel Scioli ticket, with 22.2 percent versus the ticket led by ex-president Menem, which had obtained 24.5 percent of the votes. In light of the evidence that he would surely be defeated in the second round, Menem desisted from taking part in it, and instead questioned the legitimacy of the winner’s ascent to power. And that’s how the Kirchner government began, as a tributary of that massive crisis of 2001 that swept away the preceding party system, and during which an economic recovery and social recomposition took place, thus allowing Kirchner to strengthen presidential power.

As a product of that original crisis, the so-called Kirchnerism paved the way for the fragmentation and political blurring of Peronism and radicalism. It ran alone, without political opposition at the height of the era’s challenges, and managed to receive popular support at the polls. And that’s how it opened the door to matrimonial succession, another rara avis of contemporary democracies, when Cristina Fernández de Kirchner was elected in 2007, with 45 percent of the votes versus 23 percent for Elisa Carrió, a leader steeped in radicalism.

Democracy regained its vitality, but -as in the first years of both the Alfonsín and Menem governments- by depending once more on the president’s political strength. As we have observed, Argentinean democracy -from Alfonsín to the Kirchners- has been a system driven by a single motor. “Low institutional quality and the difficulty of reaching lasting and effective consensuses are some of the Argentinean democracy’s greatest weaknesses”

In short, it has been a display of pure presidentialism, slightly weakened by the constitutional reform of 1994, with characteristics of hyper-presidentialism during the Carlos Menem government, and showing its classic weaknesses (dual legitimacy, rigidity of terms in office, a tension overload for the president, one winner or zero-sum logic, paralysis and the governance crisis) during Fernando de la Rúa interrupted rule.

Among the unresolved matters then, an overlooked one is the construction of a political system that: contains a dynamic of competition, cooperation and conflict with respect to electoral competition; unlike the logic behind joint and vertical power concentration, favors horizontal decentralization and a greater balance among the powers; encourages deliberation as part of the political decision process; and considers having enough reserves to be able to activate more than one power pole in the case of a political or institutional crisis.

The persistence, in both the government and the opposition, of exclusionary behavior and erratic directions prevented the continuity, legal security, predictability, and State policies meant to be maintained after a change in government from prevailing more widely over the short term uncertainty and permanent emergency. Low institutional quality -which affects the State as much as the representative system- and the difficulty of reaching lasting and effective consensuses are some of the Argentinean democracy’s greatest weaknesses. As Alfonsín pointed out in his moving commemorative speech, there is reason to celebrate, but there are also enough reasons to assume a genuine and necessary nonconformity, and to critically evaluate a reality that requires different answers and a shared availability to assume the responsibilities of the hour.

It is not possible for a nation to grow and develop when what is done one day is destroyed the following day, or when the success or failure of economic policies depends almost exclusively on the wise decisions or poor moves of a president voted into office every four years.

Perhaps October 30, 2008, with its refreshing evocation of the 1983 reunion for a new beginning, will also lead to a new beginning and recharge the batteries of the Argentinean democracy, which has just turned twenty-five years old.