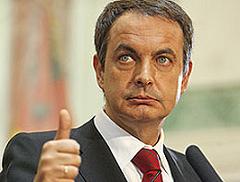 Rodríguez Zapatero’s participation in the G-20 summit in Washington provides Spain with an excellent opportunity to leave behind its inferiority complexes and convince the world that the country can play an important role on the global level, through the contribution of ideas, commitment, and leadership.

(From Madrid) AT LAST, SPAIN WILL BE represented at the G-20 summit that will be held on November 15 in Washington, thanks to an unprecedented diplomatic offensive, but above all due to the kindness of France, which has opted to grant our country one of its two seats: it is entitled to one for being the current President of the European Union (EU) and the other for being a member of the G-8. From the very moment that Bush, Sarkozy, and Barroso proposed holding a summit on the global economic crisis almost a month ago, the government of José Luis Rodríguez Zapatero carried out a desperate campaign to ensure its presence in Washington.

“Since the arrival of Bernardino León, Zapatero’s international agenda has grown exponentially larger” Spain was not invited to this function reserved for the countries belonging to the G-20 -that is, the eight richest countries in the world (the G-8), the five emerging ones (the G-5), and other representatives from every continent – despite the political and economic weight of our country, which, Zapatero’s government argued, was clearly unjust.

Therefore, he successively won the support of, among other players, the United Kingdom, France, the President of the Central European Bank, the Latin American countries, the President of the European Commission and Japan, but received a steadfast “no” from the United States. Once again, the enmity between the Bush and Zapatero Administrations reared its ugly head, an enmity that began when the still presidential candidate decided not to stand up as the American flag passed during the National Holiday parade in 2003. The withdrawal of Spanish troops from Iraq and the subsequent cooling of bilateral relations did the rest.

With Bush’s time in office about to expire, and with Zapatero hopeful that the Democrat Obama will soon be moving into the White House, nothing and no one had faith in an eventual easing of tension between the two governments capable of bringing our president to the summit in Washington. And that is how it has been. Only France’s in extremis invitation saved Spain from being ridiculed once again in the international arena. And yet, how can Spain’s excessive interest in attending the conference be explained?

“Up until now, Zapatero’s scarce presence and visibility abroad could be explained by more urgent internal political issues” The turning point can be found in the appointment, this past spring, of Bernardino León as the new Secretary General of the president’s office. Since he assumed the post, Zapatero’s international agenda has grown exponentially larger, and it now includes a tour of the Near East that will materialize before the end of the year. It will be his first visit to the region since he moved into the Palacio de Moncloa in the spring of 2004, which does not cease to be shocking if we keep in mind that two years ago Zapatero presented a peace initiative for the Middle East that Israel wasted no time in labeling a cafeteria plan. Tel Aviv’s assessment at the time was: it is like saying that in order to stop the war you need to make peace. His other big foreign policy project, the Alliance of Civilizations, has had more success, although it has not been free from criticism either, due to the absence of powerful countries, starting with the United States and Israel, and its vague and imprecise content. “El País accused Spanish foreign policy of lacking a long term State strategy”

Up until now, Zapatero’s scarce presence and visibility abroad could be explained by more urgent internal political issues, according to his cabinet. But now that the economic crisis has turned into a global problem, there has been a radical change in opinion, and our country not only wants to be there when the big decisions are made, but also wants to take part in making them. Participation in the Washington summit represents a first step in the new and ambitious direction that Spanish diplomacy intends to take. That Turkey and Argentina and Indonesia were to be in the forum that will analyze and revise the international financial system, and not Spain – the eighth world power in terms of GDP – was unquestionably a reason for Spain to protest.

“Spain should not only be worried about having its picture taken, but also about taking part in the preparatory meetings, since that is where agreements are really drafted”Now that the first objective has been met, there is nothing left to do but to continue working – at least as diligently – to make Spain an important global player. To that end, it should begin to immediately and resolutely strengthen its Foreign Service. El País pointed out that having fewer diplomats than the Netherlands does not help. Nor does the fact that, with respect to GDP, the budget for the Ministry of Foreign Affairs is one of the smallest in Europe. Moreover, the newspaper also accused Spanish foreign policy of lacking a long term State strategy.

In this sense, Spain should not only be worried about attending the summits and having its picture taken, but also about taking part in the preparatory meetings, since that is where agreements are really drafted. That’s what happened at the meeting of the G-20 Finance ministers and central bank governors that took place in Sao Paulo (Brazil) a few days ago, at which our country was not present. “Spain should buck up and give some lessons on the strength of its financial system, which has resisted the crisis better than those of other countries”

In contrast, while demanding an important role in the international scene, Spain should not only resort to macroeconomic data – according to what information are we still not a world power? – but rather it must also contribute ideas and proposals. There is an urban legend that says that the last Minister of the Economy, Rodrigo Rato, presented to then United States’ Secretary of the Treasury, Larry Summers, the possibility of Spain being in the G-7. His response was: why would we want to be in the G-7 if we had never brought anything to the international economy debate?

Attending the summit in Washington without a solid set of measures with which to better endure the crisis would be like closing the doors to our future presence in similar decision-making forums. Just as numerous analysts – as well as the government itself – have indicated, Spain should buck up and give some lessons on the strength of its financial system, which has resisted the crisis better than those of other countries. But in order to do this, it must try to overcome both its very deeply-rooted and irrational patriotic pride, and the old inferiority complexes of a Spain from another time. Only then can we be a serious, reliable… and important negotiator.