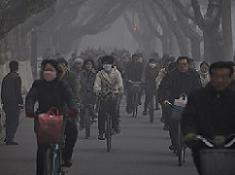 In late October, Taoist masters from all over China gathered near the ancient capital of Nanjing to agree on a seven-year plan for climate change action. Meanwhile, the 11 major religions in the world are all coming up with multi-year plans for climate action. The author wonders if this could tip the scales in favour of decisive climate action in China and beyond.

(From New York) SOMETHING UNPRECEDENTED happened in China in late October. It may not have been as glitzy or as spectacular as the Summer Olympics in Beijing, and it did not attract heads of state or world celebrities, yet it is possible that it just might leave a more lasting imprint on the future of China, and indeed the world.

Taoist masters from all over China gathered near the ancient capital of Nanjing to agree on a seven-year plan for climate change action. Anyone with at least minimal knowledge of China will immediately understand that this event constitutes more than a mere curiosity. What’s more, the fact that it was the ancient, homegrown Taoist tradition that gathered together their most revered teachers to discuss what climate change means for them and their country is more than exotic, whether one looks at it from a religious, environmental or political perspective.

THE TAOISTS ARE IMPORTANT

But how can a gathering of Taoists be potentially transformative in a country like China? “Taoist values and beliefs continue to hold enormous sway in Chinese society” This is, after all, a country where relentless, carbon-fueled economic expansion and consumerism are practically regarded as doctrine and are deeply embedded into the very fabric of society. (In this respect, Western societies are not that different, just a bit further along the same path). Bearing this in mind, wouldn’t you have to be something of a devout Taoist yourself, or a wildly optimistic and credulous climate warrior, in order to believe that such a meeting could amount to much?

Possibly, but I am willing to go out on a limb here. Let me try to explain: In the first place, the Chinese Taoists have been around for thousands of years. They have seen countless dynasties come and go, but the Tao “Taoism probably has more to offer to the environmental cause in today’s China than any other major organized religion” (which translates as the Way) has outlasted them all, proving its resilience and strength. Quite simply, Taoist values and beliefs continue to hold enormous sway in Chinese society.

Furthermore, these values and beliefs have been welcomed back into the broader discourse of society, regarding matters such as economic, social and environmental policy. Taoism is no longer confined to the personal and family levels, and to festivals and rituals. Taoist temples and their masters are increasingly addressing politicians and business leaders at all levels about environmental and other challenges. This week’s gathering was actively attended by government officials. In their statements, they asked the Taoists for help in building a more environmentally harmonious and sustainable China. They have come to realize that in order to solve current challenges and secure a sustainable future, they indeed need to mobilize all sectors of society. Today, this includes the religious one, and not just the Taoists.

Besides – and this makes the whole thing twice as interesting – Taoism probably has more to offer to the environmental cause in today’s China than any other major organized religion. “They will use their Seven-Year Plan to make a holistic and systematic contribution to climate responsibility and environmental stewardship in China” This is a strong statement, but anyone who has read key Taoist masters such as Lao Tzu knows to what extent this faith tradition emphasizes environmental stewardship as a sacred duty, something we simply must do in order to preserve our future and the balance of the entire world. Take climate change, for example. The entire problem can be beautifully captured and explained through the concepts of Yin and Yang: The carbon balance between earth and sky is off kilter, and this causes instability and disasters. It is truly significant that the current masters of Taoism in China have started to communicate precisely through this ancient, yet new, vocabulary.

Lastly, the Taoists are walking the walk. Over the last year or so they have installed solar panels on half of their thousands of temples around China, and soon the job will be completed on all of their sacred places. They are providing comprehensive guidance on all aspects of environmental and climate stewardship: water and land management, protection of biological diversity, energy efficiency of buildings, educational curricula, moral teachings, outreach through media and advocacy to business, etc. They will use their Seven-Year Plan to make a holistic and systematic contribution to climate responsibility and environmental stewardship in China. What’s more, the perspective goes beyond seven years: the goal is to change the course for generations to come, because the Taoists plan to be around for quite a while longer, continuing their sacred cosmic dance that transcends time and space.

Could this be the kind of stuff that in the end will tip the scales in favor of decisive climate action in China and beyond? Well, even if you’re halfway convinced by the four points above, you probably still think that’s a tall order to place on the Taoists–and I agree. The good news, however, is that similar things are now happening in all the 11 major religions in our world today. They are all coming up with multi-year plans for climate action, spanning all of the dimensions of who they are and what they do. They are going green when it comes to their management of land, buildings and financial investments. They are articulating care for creation more strongly and clearly in their teaching and preaching. They are strengthening their climate advocacy towards society at large, while grounding it in their own spiritual and moral traditions. By November of next year, a few weeks before the crucial Copenhagen climate meeting takes place, these faiths will all present to the world their plans and commitments.

This is no small contribution–these 11 faiths represent in some way or another roughly 80-85 percent of humanity. Perhaps that’s enough to bring us to a global, political tipping point. In the end, it may be just what is needed to convince even the most stubborn and reluctant of policy makers that the time to secure humanity’s future is now.