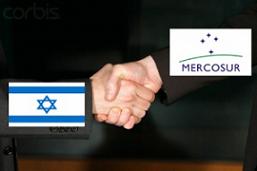 The crisis sweeping the financial markets, epicentered in Wall Street, is bringing both fear and opportunities to the countries of South America. The author states that the trade agreement between Mercosur and the State of Israel is a step forward. The challenge lies in creating policies that soften the effects of this global crisis.

(From Buenos Aires) THE FINANCIAL MARKET CRISIS imposes, in emerging countries, the need to imagine new political and economic scenarios on a planetary scale.

As the governments of the United States and various European countries are studying how to save its large groups – reorienting state intervention – distinct regions around the globe, among those the Southern Cone countries, are analyzing how the recession in the developed countries will impact their own economies.

In this context, the South American countries’ obligation to search for new markets for their products becomes a regional – bloc – obligation, and not a mere national one.

MEASURES TO HAVE ITS OWN RESOURCES AVAILABLE

“The ministers of Mercosur expressed the need to adopt mechanisms that would provide the region with its own resources to cope with the lack of international liquidity” For this reason, the special meeting of the Council of the Southern Common Market, which took place towards the end of this past October in Brasilia, raised the need for a greater coordination of individual policies, for the sake of a collective benefit, and the creation – upon the request of Argentina’s Department of Foreign Affairs (State Department) – of a commission to monitor intraregional trade, as a means of addressing the global crisis.

Although proposals were discussed but no concrete measures were agreed upon during this special meeting, the countries that make up the Southern Common Market (Mercosur), Argentina, Brazil, Paraguay, Uruguay and Venezuela (the latter in the process of being admitted) and its associate members Bolivia, Colombia, Chile, Ecuador and Peru, took a major step down the road to integration, which is something that the current situation requires.

The ministers of Mercosur expressed the need to adopt mechanisms that would allow for a financial integration, so that the region could have its own resources to cope with the lack of international liquidity. Among these mechanisms, they cited the need to found the Southern Bank, whose incorporation agreement was signed in December of 2007 in Buenos Aires.

In addition to these proposals, the Third IBSA (India, Brazil and South Africa) Summit was held on October 16; “The 700 billion dollars of the rescue plan for the insurers, banks and other financial institutions affected by the crisis in the United States could be used to pay off double the accumulated debt of the 49 poorest countries in the world” this is the discussion forum that was created in 2003 with the goal of bringing three of the largest economies in Africa, Asia and South America closer together. The trilateral trade between these three countries, by the way, reached 10 billion dollars in 2007, and it is presumed that it will hit 15 billion in 2010.

During the summit, Brazilian President Luis Ignacio Lula Da Silva, expressed that it is unacceptable that we are going to pay for the irresponsibility of speculators who transformed the world into a big casino while lecturing us on how to govern our own countries.

At the meeting, members of IBSA pointed out that the 700 billion dollars of the rescue plan for the insurers, banks and other financial institutions affected by the crisis in the United States could be used to pay off double the accumulated debt of the 49 poorest countries in the world. According to them, this figure represents five times the annual amount of special aid that would be needed to achieve the millennium development goals regarding poverty, education, and health.

In late December 2007, “In 2007, Israeli raked in a total of 55.933 billion dollars from exports to Mercosur, while imports coming from the Southern American countries amounted to 44.78 billion dollars” Mercosur signed its first Free Trade Agreement (FTA) with a non-regional country: Israel. This agreement, which de-ostracized the South American economic alliance, was not the Southern Market’s first specific success in expanding its influence.

Regarding the trade agreement signed by Mercosur and Israel, “There are several South American countries who once again view the EU as a strategic partner with whom to make certain agreements” and so far only ratified by the Uruguayan parliament, it appears to be a technical-commercial opportunity of genuine importance for the South American partners. Israel is a global leader in, among other products, software and agriculture technology supplies (from cutting-edge irrigation and fertilization systems to the production of distinct genetically modified fruits, eaten in a large part of the planet). Besides, the smooth relationship that the small democratic country in the Middle East has with various European, Asian and African markets constitutes an unbeatable appeal for the South American economic bloc’s diverse exportable products.

Overall, according to data from Cidipal [1](Israel’s Information and Documentation Center for Latin America), in the year 2007 Israeli raked in a total of 55.933 billion dollars from exports to Mercosur countries, while imports coming from the Southern American countries amounted to 44.78 billion dollars.

ALL EYES ON EUROPE

Even though the agreements between Mercosur “The challenge lies in creating policies that soften the effects of this global crisis and manage to open up new markets” and the EU were frozen as a result of resistance from the South American countries to open up some markets and the Europeans’ refusal to cut back on agricultural subsidies, the negotiations continued – without much success – so as to make the conditions conducive for reaching a broader agreement in the so-called Doha Round of World Trade Organization (WTO).

During these times of global financial crisis, there are several South American countries who once again view the EU as a strategic partner with whom to make certain agreements; because of this, it is believed that the failure of the Doha Round could open – at this point – the door to the possibility of resuming negotiations, with a drop in European subsidies being presented as a necessity.

The presidents of Uruguay, Tabaré Vásquez, and Brazil, Luiz Ignacio Lula Da Silva – who pledged to do everything possible to achieve the agreement – made statements along those lines.

Necessary strategies still need to be defined so that the South American countries know how to take advantage of the current international situation, which, with intelligence and pragmatism, could be beneficial to regional interests. The challenge lies in creating policies that soften the effects of this global crisis and manage to open up new markets.

In the words of Juan José Daboub, Managing Director of the World Bank: Latin American countries are better prepared than a decade ago to overcome the crisis, and its effects are being anticipated, by strengthening their reserves and institutions, and striving to maintain social investment .