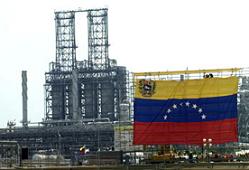 The drop in the price of oil is threatening Venezuela’s internal stability: for every ten dollars that it drops, Caracas will lose five billion dollars each year, which will bring the country to bankruptcy.

(From Bogota and Madrid) CAUGHT UP IN HIS OWN internal contradictions, and with Venezuela suffering from a serious economic crisis aggravated by the drop in the price of oil, president Hugo Chávez is facing some crucial local and regional elections, since there are many challenges ahead for his country, “As Chávez himself has admitted, corruption is the big curse on the chavist government” which is submerged in one of the most critical moments in its history.

Since December 2007, when President Chávez suffered an unprecedented defeat at the polls – which has still not been officially recognized, since it was, as the country’s highest leader assured, a crappy victory – for the first time, the democratic opposition is present on the political scene with enough power to defeat chavism and become, in the short term, the necessary alternative to the worn-out model promoted by the 21st century socialism movement.

In the first place, as Chávez himself and other official leaders have admitted, “Thanks to the chavist revolution, the homicide rate is 4 times higher and Caracas is now the world’s No. 1 murder capital” corruption is the big curse on the chavist movement and its government, and it has spread like a virus throughout all of its society and institutions, in the process taking legitimacy and credibility away from a regime that was supposedly born to put an end to centuries of State-organized impunity and theft.

A new social class fed by the wealth brought by oil and the benefits of belonging to the new regime has developed tremendously during the past few years, and has clearly split off from society, as many independent sources and alternative media to the regime’s have denounced. Chávez himself has repeatedly admitted that this authentic tumor could do away with the authentic revolutionary essence, and he has called for the curse to be combated.

Or, as Le Monde Diplomatique says, Venezuela has come to need a revolution within the revolution.

And then there is the crime issue, which is increasingly worrying Venezuelans, and has become one of the country’s main problems. “The number of homicides in Caracas is 130 per every 100,000 inhabitants” Daily robberies and murders, unsolved kidnappings, an unbearable homicide rate and an atmosphere of insecurity that can be felt in every social strata and major city – not to mention political inefficiency and impunity – have made Venezuela one of the most dangerous countries in the world.

In any international list, Venezuela ranks among the three most dangerous countries on the globe. What is incredible is that in the eighties the homicide rate in Venezuela was around eight per every hundred thousand inhabitants, which is below 12, the level at which a country is considered to have a violence problem. Today, thanks to the chavist revolution, the homicide rate is 4 times higher and Caracas is now the world’s No. 1 murder capital.

Since Hugo Chávez came to power in 1998, the country’s homicide rate has increased by 67 percent, and currently stands at 52 homicides per 100,000. According to official data, the number of homicides in Caracas is 130 per every 100,000 inhabitants, which is significantly higher than the figures of other cities on the continent. What’s more, unofficial data claim that this horrific rate is even higher.

“The megalomania of the Venezuelan leader will provoke certain turbulence in the upcoming months; the Chávez era is coming to an end” With respect to the economic situation, the Madrid-based newspaper El País recently maintained that the fall in the price of oil threatens Venezuela’s internal stability and the exportation of 21st century socialism from President Hugo Chávez to the rest of Latin America. Crude oil represents 98 percent of its foreign trade, and it allows Caracas to help its good friends in the region. The problem is that in the past few months, the Venezuelan barrel has collapsed: West Texas Intermediate (WTI) oil, a benchmark for oil prices in the United States, was valued at $52.85 dollars a barrel in the Asian market, while the value of North Sea Brent Crude, a price reference for Europe, dropped by 87 cents and stood at 50 dollars.

According to The Economist, for every ten dollars the price of crude oil drops, Caracas will lose five billion dollars per year; and when it is below 75 dollars a barrel the Venezuelan economy’s current importation rate and the mega projects promoted by Chávez on the rest of the continent cannot be maintained. Some economists think that, after the drop in oil prices, the chavist State could become incapable of paying off its debts, including those incurred from arms purchases, principally from Iran and Russia, two of its major providers.

THE CHÁVEZ ERA IS COMING TO AN END

“Venezuela’s inflation rate is today the highest in Latin America” Referring to this issue, the well-known economist and political leader Theodor Petkoff wrote in one of his editorials in the newspaper Tal Cual that the Government has no way of enduring between eight and twelve months of a 60 dollar barrel. But enduring means eating one’s own liver and giving savings a beating. And afterwards? The estimation of 60 dollars a barrel shows up to what point the Government has made enormous, recurrent commitments, but based on oil revenue that has historically never been recurrent. It is strange that these socialists did not foresee the cyclical crisis of capitalism. That is, in the words of Petkoff, the time will come when the Venezuelan Government will have to choose between butter and cannons. The unhealthy megalomania of the Venezuelan leader will provoke certain turbulence in the upcoming months: the Chávez era is coming to an end.

“The restrictions on the freedom of the press have been one of the aspects condemned the most by independent Venezuelan journalists and media over the last few years”As for human rights, we must remember that the organization Human Rights Watch condemned the terrible situation in the chavist paradise mercilessly built by a regime that has not had any reservations about carrying out shady operations to physically eliminate its opponents or simple informants who disagree with the official truth. The HRW’s last report, which led to the organization being expelled from the country, talked about political discrimination as a defining characteristic of Chávez’s presidency, with Chávez systematically branding his opponents as antidemocratic conspirators, regardless of whether they were in any way involved in the coup of 2002 or not. Moreover, HRW claims that after the coup the most serious Rule of Law violation in Venezuela was Chávez and his supporters’ political seizure of the Supreme Court of Justice in 2004, which managed to neutralize Judicial Power as an independent branch of the government.

According to HRW, there is still dynamic public debate in Venezuela, where the media opposed to and in favor of the government can make their criticism and support of Chávez heard, but the Government has threatened freedom of expression through diverse measures to change the control and content of the media.

RESTRICTIONS ON THE FREEDOM OF THE PRESS

“The chavist regime is trying to monopolize the media, in a manner very similar to the castroist single discourse model” The organization also criticized the government because it has hurt existing labor unions and favored the emergence of new parallel labor ones that support its political agenda. The government confronts human rights defenders and civil society organizations. They have been subject to legal harassment, unfounded accusations discrediting their work, and initiatives to exclude them from international forums and restrict their access to international financing. HRW has said the same thing that the human rights defenders that it has supported for years said. What the government has done is systematically monitor and expel its representatives, which only gives the organization greater importance, and makes its reports more credible, the devastating evaluation concluded.

The restrictions on the freedom of the press have been one of the aspects condemned the most by independent Venezuelan journalists and media over the last few years. Venezuela has also been condemned in various international forums, such as in the Inter-American Press Society’s Commission on the Freedom of the Press, where the representative of the Venezuelan bloc and the editor of the newspaper Correo de Caroni, David Neteria, recently stated that Chávez’s regime controls the majority of the country’s mass media and fosters a confrontational environment with the journalist institutions that try to maintain democratic firmness in face of the Government. According to the SIP, Chávez’s regime is trying to monopolize the media, in a manner very similar to the castroist single discourse model. “The opponent Julio Soto, a university leader from the state of Zulia, was assassinated, and a colleague of his was wounded, in a gun attack in Maracaibo”

The job of the independent media and journalists is becoming increasingly difficult and dangerous, Natera stated. Ever since Hugo Chávez rose to power ten years ago, Venezuela has been going through a period of unprecedented violence, insecurity and impunity. The Venezuelan representative, who has participated in several international forums denouncing the situation in his country, indicated that Chávez has used public money to created a hegemony over the media, which allows him to impose ideological content and proselytize while spewing threats and unfounded accusations against his opponents.

He also denounced the growing climate of official hostility towards the media reluctant to disseminate the government’s versions of the news present in Venezuela. And, according to Natera, the most recent government attacks use as a pretext the alleged conspiracy of media personalities in favor of assassinating Chávez, among them the president of Globovisión, Alberto Federico Ravel, and the director of the newspaper El Nacional, Miguel Enrique Otero.

A separate chapter in a book about what is going on in chavist Venezuela could be written on political assassinations, which are almost always shrouded in mystery, and which add to the unsustainable atmosphere of insecurity prevalent in this Caribbean country.

Journalists, above all, have been assaulted, insulted and threatened in the past few years, but the regime crossed the Rubicon some time ago and has begun to assassinate political opponents. Several weeks ago, the opponent Julio Soto, a university leader from the state of Zulia and an activist of the Un Nuevo Tiempo (UNT) party, was assassinated, and a colleague of his with the same background was wounded, in a gun attack in Maracaibo.

This incident has so far gone unpunished, just like this year’s assassinations of the journalist Javier Jarcía and the vice-president of the daily Diario Reporte de la Economía, Pierre Gerges. Official investigations, which were announced with great fanfare, have still not amounted to anything.