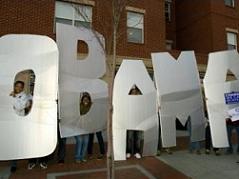 Learn why the enormous expectations placed on the president-elect of the United States are precisely Obama’s biggest problem.

(From Santiago de Chile) THE MAIN PROBLEM that Obama will face is the expectations that his electoral victory has created, not only in the United States, but in the whole world. Indeed, in practically every place around the globe, people were interested, and the truth is that if these great expectations are not satisfied, there will be frustration.

In this sense, we are witnessing is a classic problem of politics, one that comes into play above all when it is expected that a simple change of leader, or even of regime, will cause a great transformation.

“Americans hope that he confronts the economic crisis head on and, more than anything, prevents the financial fiasco from affecting the real economy” Obama has already made history by becoming the first African American to reach the presidency in a country marked by racism. But with this already in the books, once we get past his charisma and impressive oratory skills, Obama is limited in what he can do for various reasons: in the first place, the United States is a power with global interests that are not going to be significantly modified by whoever happens to occupy the White House.

Furthermore, its domestic system operates with checks and balances, and although as commander-in-chief the presidential power is total, it is not only counterbalanced by the powers of the states and governors, but given its federal character, by a Congress with sweeping powers – above all in budgetary matters – and by the Supreme Court, whose rulings are practically laws in and of themselves.

But on top of this, the problems that Obama has to deal with even before assuming power leave him with a limited amount of room to maneuver. “As for dealing with a nuclear Iran, Obama’s options are not going to be very different from those of any other leader” To begin, Americans hope that he confronts the economic crisis head on and, more than anything, prevents the financial fiasco from affecting the real economy, meaning, keeping the bankruptcy of the banks from reaching industries and, most importantly, employment.

Internationally, he has limited leeway regarding the war in Iraq, and even less when it comes to the war in Afghanistan, as today the latter is much more difficult than the former from a strictly military point of view. In Iraq, there is very strong pressure coming from allied Sunni Arab countries like Saudi Arabia and Egypt, who, like Turkey, feel threatened by the Iranian nuclear program and, unlike Israel have no means of responding to an attack of that nature. For this reason, it is more likely that the troops will remain until at least 2011, and not only for another 16 months, as Obama said during his campaign.

A SHIFT TOWARDS THE CENTER

“Obama has demonstrated great realism in his nominations, and he has realized that he must make budget cuts” In other words, there is no doubt that with Obama, the United States is going to recover its international prestige quickly, just as its foreign policy is going to consider multilateralism, use soft power and not only power derived from weapons, and quickly close that monument to the violation of human rights that is Guantanamo. However, as for dealing with a nuclear Iran, Obama’s options are not going to be very different from those of any other leader.

But moving beyond international matters, which did not make much of an appearance in the election, the main issue by which American voters are going to judge the success or failure of the Obama Administration is the economic crisis. So far, Obama has demonstrated great realism and prudence in his nominations, the majority of whom are experienced staff members from the Clinton administration, and he has realized that, in conjunction with the best possible Keynesian style stimulus package, he must make budget cuts. “In the United States of today, there is no money to provide universal health insurance or replace oil with sustainable energy sources”

This provides us with a clue as to what the Obama Administration will be like, in the sense that he is increasingly moving towards the center when making his decisions. This is reminiscent of the process that took place with Lula in Brazil, where the promise for change was reduced to an economic administration focused on social issues, but without significant alterations to what already existed.

This is the end of the arrogance of the Bush era, but Obama’s Yes, we can is restrained by an economy in which little can be done. The truth is that in the United States of today there is no money to provide universal health insurance or replace oil with sustainable energy sources. Furthermore, resources that could have been used for education and health, at least for his first year, have already evaporated in the Citicorp rescue.

THE SIGNIFICANCE OF THE RESOLUTION OF THE CRISIS

“The way in which this crisis is resolved is even going to influence the modification or maintenance of the global status of the United States” In summary, the United States is like an ocean liner that can neither move quickly nor go where the captain would like. And this is where the danger that exceedingly high expectations entail comes from. For example, in Africa people hope that Obama’s skin color will lead to the dawn of a new era for the continent, when the fact is that the international financial crisis is going to hurt Africans even more, with the rise in the cost of credit and the decrease in aid. The same can be said of American minorities like the blacks who hope to overcome centuries of racial limitations.

And this is where the principal danger for Obama lies: in exceedingly high expectations regarding what he can do, considering the nature of the United States’ power and its interests throughout the world. His success, furthermore, depends on the manner in which he faces the economic crisis.

What’s more, the way in which this crisis is resolved is even going to influence the modification or maintenance of the global status of the United States.