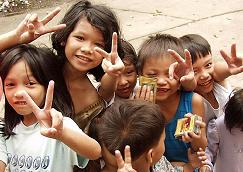 Filipino students’ scores on the annual international student performance tests in math and science are some of the lowest in the world. Some education policy experts believe that the trouble lies in the language being used for instruction: English.

(From Manila) THERE ARE LONG-STANDING concerns regarding the quality of education in the Philippines. Education experts point out that the country’s scores on the annual international student performance tests in math and science are some of the lowest in the world – that is, when the country doesn’t place dead last.

Even though every aspect of the country’s educational policies has been changed in recent years –in some cases more than once– the outcome remains the same, or has gotten even worse. The trouble, some education policy experts believe, lies in the language being used for instruction: English.

A POOR COMMAND OF ENGLISH

If students’ math and science scores are poor, their performance in English is even worse. A nationwide test by the “Only 16 percent of nursing applicants pass the US Test of Spoken” English Department of Education (DepEd) reveals that only 6.59 percent of fourth year high school students have a mastery of English. Thus the question arises: how can English be the language of learning if students do not have a strong enough command of the language to support learning itself?

Those who favor the use of Filipino as a medium of instruction believe that the problem will rectify itself if English is dropped in favor of the lingua franca or mother tongue. Their argument is that English can be a tough language to learn, and forcing children to acquire a foreign language at a young age might actually hurt their learning capacity, or even dampen their interest to learn. If the mother tongue or local language is used instead, they theorize that the students’ capacity to learn and master any subject –including English itself– will improve.

SPILLING OVER FROM SCHOOLS INTO THE WORKFORCE

Naturally, the problem does not magically disappear after graduation. A 2002 poll of businessmen in the American Chamber of Commerce in the Philippines rated the English skills of the Filipino workforce as deteriorating. To cite a specific figure, only 16 percent of nursing applicants pass the US Test of Spoken English. Furthermore, the UNDP Philippine Human Development Report said that aspiring Filipino teachers have poor English language skills, and that out of all of the subjects on their licensing exams, they score the lowest in English. “Reports of the erosion of the quality of the Filipinos’ English have convinced President Gloria Arroyo’s administration that a rapid and extensive deterioration could take place”

On the other hand, the deterioration of the English skills of Filipinos is the very reason that some sectors are pushing for reforms designed to improve English competency. Critics argue that said idea is more focused on the economy and employment –and especially overseas jobs– than on scientific research on learning, child development and cultural understanding. The importance of English in the workforce is clear. For example, those doctors, nurses, seamen, teachers, domestic helpers (and really just college graduates in general) who speak English well have an edge on the rest and are able to work abroad, thanks largely to their competency in English. They help make Philippine migrant workers one of the largest migrant worker groups in the world. Indeed, the more than 10 million Filipino workers abroad have managed to prop up the Philippine economy by sending some $16 billion back home to their families last year, amounting to the fourth largest level of total remittances in the world, and accounting for almost 12 percent of the country’s entire GDP. Indeed, remittances from overseas workers have time and again made it possible for the country to survive many crises, and they will perhaps help it weather the current financial crisis.

Until recently, “Moderate views believe that schools should not force Filipinos to pronounce English the way native speakers do, but should allow them to speak it with a Filipino accent” Filipino was favored in schools. But the mounting reports of the erosion of the quality of the Filipinos’ English have convinced President Gloria Arroyo’s administration that a rapid and extensive deterioration could take place. Thus, fearing that Filipino workers could lose their competitiveness, President Arroyo is strongly emphasizing English, yet again. The administration argues that in the globalized age of the Internet, those who refuse to learn English will only lose out.

Others have more moderate views and believe in a middle ground. Their ideas include maintaining the status quo: the use of the child’s mother tongue as the medium of instruction in early childhood education, through the third grade. Education officials explain that the first three years of education should be in the child’s native language, as this is his or her operative language, and as such, it facilitates quicker learning.

Yet they also emphasize that being fluent in English is one thing, and speaking it with a British or an American accent –which many language schools try to teach their students to do– is another. They believe that schools should not force Filipinos to pronounce English the way native speakers do, but should allow them to speak it with a Filipino accent. “Most private schools prefer to use English as the language of instruction, since many of those parents who can actually afford the tuition demand it”

Local educators must also recognize –and emphasize in the books used in schools– the unique English words that Filipinos have adopted, such as trainor, which is used to refer to an instructor-in-training. Much like the English people, the English language has traversed the world and absorbed words from other languages in a very liberal manner, to such a point that one could make the case that, as a consequence of its evolution, no one owns the language anymore. This past April, a Texan firm that keeps track of changes in languages estimated that the English language’s vocabulary will soon surpass 1 million words.

The moderates also do not see the current bills being passed in Congress, whether they be in favor of strengthening the use of English or the local language as the medium of instruction, as being very helpful. Instead, they believe that it is best to leave policy directives up to DepEd, or in the case of private schools, to allow them to be determined by market forces. In reality, most private schools prefer to use English as the language of instruction, since many of those parents who can actually afford the tuition demand it. This is because they often equate English to a good education and greater job opportunities.

In general, “The inequality in student performance between private and public schools is closely related to the learners’ socio-economic background” private schools in the Philippines perform better than public ones, due to better facilities, services and –most importantly– teachers, since they can afford to offer higher and more competitive rates. In fact, research suggests that a good teacher is the single most important factor in boosting achievement; it is more important than the language of instruction, class size, the budget and the quality of textbooks. There is no question that, as one South Korean official put it, the quality of an education system cannot exceed the quality of its teachers. What’s more, private schools have fewer problems with student discipline than many urban public schools. Unfortunately, due to the country’s high poverty rate, it is not surprising that over 95 percent of children are enrolled in public schools.

The inequality in student performance between private and public schools is closely related to the learners’ socio-economic background. “It is worth mentioning that on the psychological level, the Philippines has always been in a perpetual crisis when it comes to education”For example, those who encounter difficult circumstances in life often drop out even if the state provides free basic education in public schools, because poverty compels poor families to sacrifice their children’s schooling, and even make them work. Families with incomes below the poverty line simply cannot afford to educate their children beyond grade school. Even among the private schools themselves, this correlation between money and performance does not disappear, as those with the highest tuition rates also have the best teachers.

This is not to say that public schools don’t have any competent teachers. However, one of the things that makes a teacher good is having a profound knowledge of the subject he or she is teaching; yet due to the shortage of public school teachers, they often have to teach subjects that are not closely related to their specialties. Also, public school teachers in the Philippines rarely get much training after being shoved into their classrooms, whereas in Singapore teachers are provided with 100 hours of training each year and senior teachers are appointed to oversee professional development in each school.

On a final note, it is worth mentioning that on the psychological level, the Philippines has always been in a perpetual crisis when it comes to education. This is a reflection of both the Filipinos’ predilection for cynicism and the fact that it is a society that demands and expects more.