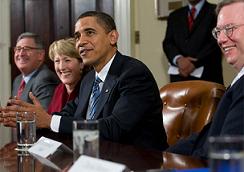 While Obama has raised many hopes and achieved a rhetorical break with the totalitarian language of the Bush administration, his choice of advisers indicates regression rather than progression. Yet if his promise turns out to be meretricious, the world’s rocky relationship with the United States will deteriorate even further.

(From London) THE TITLES OF SOME recent pieces in mainstream publications in the United States and Europe, such as Capitalism at Bay [1] (Economist), The Age of Nonpolarity [2] (by Richard Haass in Foreign Affairs) and America’s Hard Sell [3] (Foreign Policy) demonstrate a trend forecasted by many supposedly dissident intellectuals a long time ago: the end of the unipolar transition moment in international affairs.

FROM THE EVIL EMPIRE TO A NEW AMERICAN CENTURY

“Wolfowitz, Perle and Rumsfeld. That these defenders of the ill-fated neo-conservative project are now also its most prominent fugitives indicates the disintegration of their neo-imperial narrative” Nearly two decades ago, many analysts of a neo-conservative bent got caught up in the euphoria engendered by the demise of the Soviet Union, and subsequently lost their rationality. A whole range of staunchly right-wing politicians and commentators were convinced that the end of the evil empire heralded a new era of American predominance. Pulitzer Prize winner Charles Krauthammer casuistically expressed the sentiments of many adherents to America’s special mission in international affairs: he envisaged that the world had entered the unipolar moment in 1991. In other words, after the demise of the Soviet Union, it was believed that the United States was the only globally dominant pole within the international system. Krauthammer revisited his thesis after the terrorist attacks on the United States in September 2001: History has given you an empire, if you will keep it.

Discourse was complemented with institutional organisation, e.g., the Project for a New American Century, which effectively pooled together the protagonists of America’s imperial project, including the most radical and ideologically-driven supporters of the wars in Iraq and Afghanistan: Paul Wolfowitz, Richard Perle and Donald Rumsfeld. That these three ardent defenders of the ill-fated neo-conservative project are now also its most prominent fugitives is an indication, in my mind, of the disintegration of their neo-imperial narrative. In many ways, their dream of a new American century has been buried in the trenches of Iraq and Afghanistan and the dungeons of Abu Ghraib and Guantanamo. President Obama is busy salvaging what is left of the American brand, prudently repackaging what it means to be the leader of the free world within an international system that does not necessarily yield to this type of rhetoric any more.

Getting beyond all of the euphoria that Obama’s election has sparked, a sober analysis of contemporary international politics shows that we are living in a non-American world order. We don’t need the recent report by the US intelligence agencies titled Global trends 2025: A world transformed, which tentatively indicates that the country is losing its exalted position relative to other powers –primarily India, China and Russia– to establish that. “The Bush Administration failed to contain the resurgence of the Left in Central and South America, where chavista politics continues to keep the pro-American technocratic classes out of power”

This can be inferred by reviewing the main events in global politics during the past decade: the failure to integrate Russia into the NATO led security structure in eastern Europe, which has once again pitted the country against the Western alliance, which has not deemed it necessary to redefine the Cold War rationale and raison d’être of its flagship military organisation; the failure to engineer a viable security order in Afghanistan [4], which has led to the resurgence of the Taliban and forced Afghan President Hamid Karzai to propose negotiating with Mullah Omar, the fugitive leader of the Taliban who forged a close alliance with al-Qaeda and Osama bin Laden when he was in power before the US invasion in 2001; the Bush Administration’s pronounced strategic failure in Iraq exemplified by the US-Iraq Status of Forces Agreement (SOFA [5]), the new draft of which a) makes it even more unlikely that the US military could stay in the country beyond 2011, b) forbids US troops to carry out operations without prior Iraqi approval, c) forbids the US to launch a military attack on other countries from Iraqi territory, and d) prevents US troops from detaining any Iraqi without an Iraqi court order.

The Bush Administration also failed to contain the resurgence of the Left in Central and South America, where chavista politics continues to keep the pro-American technocratic classes out of power, certainly in Nicaragua (Ortega), Bolivia (Morales) and thus far in Venezuela itself, exemplified by the recent electoral gains of that country’s United Socialist Party (PSUV). The Bush Administration could not even change the equation in Zimbabwe, where the tyranny of Mugabe continues to reign supreme. Another failure to impinge on the politics of the third world can be seen with the revival of the Islamist forces in Somalia, which have largely repelled the US-backed Ethiopian Army and regained control over the most strategic parts of the country. The list goes on and on.

Undoubtedly, Obama has raised many expectations, and I have repeatedly emphasised [6] that he has already achieved a rhetorical break with the totalitarian language of the Bush administration. Yet we also know that politicians are capable of the most outrageous dishonesty, and that they are –since they are conscious of serving something bigger than themselves– intransigently certain of being right. Here lies the danger: If Obama’s promise turns out to be meretricious, the world’s rocky relationship with the United States will deteriorate even further.