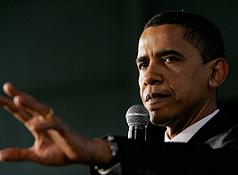 The renovation of infrastructure, the launch of an efficient, green industry and the improvement of the health care and social security systems: these are the three pillars of Obama’s political economy to respond to the crisis. The risks? Racking up an exorbitant public deficit and adding more difficulties to his term, say the skeptics.

(From Madrid) RAHM EMMANUEL, PRESIDENT OBAMA’S mercurial chief of staff, has formulated the doctrine that will surely guide the White House’s actions for the next four years: You never allow a serious crisis to go to waste. There is an opportunity to do big things.

“Obama is trying to take away the best lessons to come out of the New Deal, from the instinct of the president who proposed them” Obama’s intellectual reference point is the New Deal. But only superficially. The current situation is quite distinct and the conditions and characteristics of this crisis are significantly different.

Franklin Delano Roosevelt took advantage of the trauma that American society experienced during the beginning of the 1930s, using it to install a social architecture hitherto unknown in the country.

Thirty years ago, the second oil crash of the seventies unleashed the most serious depression in decades. The neoliberals also saw in this crisis the opportunity to bury the model in place in the West since the end of the Second World War.

“Thirty years of neoliberal hegemony makes it harder to break with the global vision of the American economic system” Now we have come to another crossroads. Obama is trying to take away the best lessons to come out of the New Deal, but not from its cures, but rather from the instinct of the president who prescribed them.

Out of all of the remarks and analogies floating around these days, the one with the most political opportunity has to do with the intensity with which the chosen measures are adopted. At the time, Roosevelt was reproached for not daring to make the change more profound, and one can already sense some fear that Obama will commit similar mistakes.

Progressives –social, intellectual and those in the media– are asking Obama to not be intimidated by the centrist bent of the majority of his economic advisers, and to put together an agenda to definitively modernize the country in terms of social rights and services. “The bailout of the financial system overlaps with the economic stimulus program”

Thirty years of neoliberal hegemony, more or less kept under control during the Clinton years, makes it harder to break with the global vision of the American – and by extension – Western economic system as a whole.

And as such, with the insufficiencies of the orthodox solutions to the financial quagmire confirmed, people have begun to talk, for example, about an eventual partial nationalization of the banking system and the recovery of the State’s essential role in the economic revitalization.

THE POSSIBLE PILLARS OF THE POLITICAL ECONOMY

It is not pure chance that the ideas that break with the past the most are proposed in the Anglo Saxon countries: those most influenced by neoliberal orthodoxy. “The message of committed and decided support to Main Street, without completely forgetting to salvage that which can be salvaged from Wall Street, is not an economic plan, but rather a political one” In the UK, Prime Minister Gordon Brown has already adopted decisions that are in practice, if not in theory, equivalent to a public solution for a good deal of the private banking system. Profoundly debilitated by the deregulatory excess and the mortgage bubble, credit entities that were apparently solvent a few years ago have literally collapsed.

In the United States, the bailout of the financial system overlaps with the economic stimulus program. Obama wants to demonstrate with actions that the government is intervening to save the middle class – families and small and medium-sized business – and not only to rescue those banks that have fallen, many of them due to their own irresponsibility.

This message of committed and decided support to Main Street, without completely forgetting to salvage that which can be salvaged from Wall Street, is not an economic plan, but rather a political one; in other words, it is the return of the political economy as a key element of the government’s actions. By itself, the government’s new stance already constitutes a change of historic importance because, at least for the moment, it gets rid of the legacy of Reaganomics [1], in all its shapes and forms.

“Obama’s advisors believe that the president is hoping that China will continue to support this effort, since a large portion of the American debt is owed to China”

The three pillars upon which Obama can construct his political economy for the 21st century are:

– The renovation of physical and electronic infrastructure, which allows for the modernization of highways and basic public service installations, but also for the country to be equipped with the most advanced telecommunications network possible.

– The launch of a clean, green industry built on the concept of efficiency and based on the development of renewable energy, and not on the excessive consumption of conventional sources.

– A substantial improvement of the health care and social security systems, which is always necessary, but especially pressing at this time because, in the majority of cases, if you lose your job in the United States, you lose your health insurance.

Obama is ready to tackle the first two challenges immediately, but he appears to be hesitating on the third, out of fear of racking up an exorbitant public deficit and creating more difficulties for his term.

Despite the care with which the administration is proceeding, the Republican opposition, although weakened and in the process of reconstructing its identity, has preferred to deny Obama support in the Lower House: not a single one of its representatives has voted in favor of the economic stimulus package, joined, by the way, by some so-called fiscally prudent Democrats.

The principal argument of these skeptics lies in the threat of an increase in the public deficit, although they weren’t so scrupulous when the Bush administration compromised the country’s ability to assume debt with the most fabulous rearmament program since the Second World War.

Obama’s advisors and some non-government experts believe that the president is hoping that China, out of its own interest, will continue to support and endorse this effort since a large portion of the American debt is owed to China.