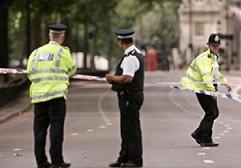 Find out why the House of Lords did the right thing in defeating a bill that would have allowed for the detention of suspects for up to 42 days without being formally charged with an offence.

(From Edinburgh) THE END OF LAST YEAR saw a controversial piece of anti-terror legislation from the Government rejected by the British Parliament [1]‘s second chamber, the House of Lords [2].

First introduced to Parliament back in December 2007, the Counter-Terrorism Bill [3] contained a host of new powers designed to help authorities deal with the threat of modern terrorism. The most contentious element of the bill was its proposal to extend the length of time a suspect can be held by the authorities without being charged with an offence to 42 days.

The debate surrounding the length of time someone can be held without a charge has had a constant presence in the Government’s anti-terror measures since the dawn of the new millennium, and more so following the September 2001 attacks on New York and Washington, and the July 2005 bombings in London, as proposals have sought to further increase the limit.

The Terrorism Act [4] 2000 gave the police the power to detain a suspect without charge for 48 hours, a period which could be extended to seven days with court permission. In 2003, the period was extended to 14 days, and with the introduction of the Terrorism Act 2006 [5] the current period of 28 days was agreed upon following the rejection of a 90-day proposal.

The initial vote on whether to accept the proposal to extend the legal period of detention without charge to 42 days came before Parliament in June 2008. The Government suffered a major backbench revolt as 36 of its own members refused to follow the party-line and voted against the measure. However, by gathering support from smaller parties, the Government managed to squeak out a win with a vote of 315 to 306. There were claims that the Government had offered incentives to these smaller parties for them to back their plans; however, these claims have never been confirmed.

THE GOVERNMENT’S ARGUMENT AND SAFEGUARDS

“The Director of Amnesty in the UK criticised the proposal, citing the loss of human rights and the imbalance of power that would result in the Home Secretary effectively being able to detain people without charge for 42 days” The Government argued that due to the changing technologies and the complexity and scale of modern terrorism cases, in exceptional circumstances, the police must have the 42-day period available to them. Many of the recent terrorist cases that have come before the courts have involved detailed computer evidence, which is often found in encrypted forms and requires massive amounts of time and effort to be decoded. The Government stated that this was the right time to bring in a law of this nature, rather than trying to rush required legislation through in the midst of the hysteria and panic of a possible major terrorist attack in the future. They argued that this legislation would ultimately make the UK safer from terrorists.

The Government proposed safeguards that, they argued, would ensure that the law would not be used indiscriminately, and would be exercised only in the face of a compelling operational need. As for what would constitute such a need, the examples given by the government were complex cases involving the foiling of a major, multi-national plot. The law would be invoked by the Home Secretary [6] who, at the request of the police and the Director of Public Prosecutions, could activate the 42-day period. The Home Secretary would have to inform Parliament within two days of the activation of the measure, and would need to gain approval from both the House of Commons [7] and the House of Lords. Parliament would not be capable of stopping the power from being used at the outset.

This controversial measure was widely criticised, both domestically and internationally, with opponents angered by the further erosion of human rights and civil liberties, and the inadequacy of the safeguards. In Parliament, the other two major parties, the Conservatives [8] and the Liberal Democrats [9] opposed the proposal. “The passing of this law would have been used by the Prime Minister as a show of strength in the face of poor public support for his leadership”

The Director of Amnesty in the UK criticised the proposal, citing the loss of human rights and the imbalance of power that would result in the Home Secretary effectively being able to detain people without charge for 42 days. This situation could come about in the event that the police were to apply to use the power on day 27 of an arrest, and the Parliament were to not have an opportunity to vote until two weeks later. This would mean that the individual would have been held for the full 42 days before anyone could even oppose the detention.

Liberty [10], a civil liberties group, fought the government’s proposal with its Charge or Release campaign, lobbying Members of Parliament on the threat to civil liberties posed by the legislation, and arguing against the notion that the measure would make the UK any safer from the threat of terrorism. Thomas Hammerberg, the Council of Europe’s Human Rights Commissioner, feared that the enactment of this measure in the UK could lead to other countries heading down a similar path.

A CRUCIAL VOTE IN THE HOUSE OF LORDS

After the Counter-Terrorism Bill narrowly made it through the House of Commons, it was then onto the House of Lords, the next step in the legislative process. Generally, the decisions made in one House have to be approved in the other. The Lords revise, amend and scrutinise legislation originating in the House of Commons. This particular proposal was to receive a tough reception there, especially since the Government lacks an overall majority in the Second House.

There was a feeling among many Lords that for Prime Minister Gordon Brown the issue had become more about political gesturing than about national security. Indeed, the passing of this law would have been used by the Prime Minister as a show of strength in the face of poor public support for his leadership.

However, this was not to be, as the Lords voted 309 to 118 against the extension to 42 days, marking a crushing defeat for the Government. Under the terms of the Parliament Acts [11], the Government could have forced the measure through after its rejection, but it is a controversial, time-consuming and rarely used process that could have set the whole Bill back a year. Immediately after the defeat, the Government stated that the proposal to extend the period of pre-charge detention to 42 days would instead be the subject of a separate piece of legislation that could quickly be brought to Parliament if required. Therefore, rather than going back through Parliament again, they accepted that it must be dropped from the Bill in order for that to pass through both Houses of Parliament and become law. In this case, the ancient constitutional body protected the hallowed constitutional rights of UK citizens from arbitrary state action.

The Counter-Terrorism Act [12] arrived on the statute books late last year, but crucially, it did so without the power to extend pre-charge detention to 42 days.

“By giving so much authority to the Home Secretary and such little judicial oversight, the policy presented many possibilities for misuse, misunderstanding and resentment”This debate is one that will rage on long into the future, and the argument for extending pre-charge detention will reignite in the event of any future terrorist attack. However, there are compelling reasons to think that the outcome of this recent debate was the right one, and that it was essential that the crucial vote in the House of Lords returned the verdict that it did.

The Civil Contingencies Act 2004 [13] already allows the Government to temporarily extend the pre-charge detention period in the face of an emergency emanating from large scale terrorist attacks or national emergencies. This legislation also provides checks and balances, something that was notably absent from the Government’s proposal.

When seeking to introduce legislation that fundamentally alters the relationship between the State and its citizens, the Government should seek to establish as much consensus as possible both within Parliament and in the country. The UK has a long history of ensuring that certain rights are upheld and citizens cannot be unlawfully imprisoned, dating all the way back to the Magna Carta [14] in 1215. Habeas corpus [15] gives the right to a fair trial and defence against charges lodged and unlawful imprisonment, and this proposal tested that by further extending the period that someone can be held without recourse to these historic rights.

The debate had become overtly political, and more about the Prime Minister’s fight for survival in the face of a large rebellion among his party. These are not the ideal pre-conditions for the introduction of such a proposal.

CHECKS AND BALANCES AND EYES TO THE FUTURE

An essential element in creating any law is to ensure that there are robust checks and balances contained therein. This is important for many reasons, but mostly because any law we make today with one government must be viable tomorrow, and to that end should transcend the current executive of the day and carry over into the future. These proposals failed to provide that. By giving so much authority to the Home Secretary and such little judicial oversight, the policy presented many possibilities for misuse, misunderstanding and resentment. Authorities seeking to remove a citizen from their job, life, and family for a period of 42 days without charge must surely, at the very least, have to go through a robust procedure to do so. When creating legislation we must do so with the aim of ensuring that it will be fair in both the hands of a good government and a bad one. Giving the power of a 42 day pre-charge period to a bad government would itself be liable to cause terror among citizens.

Additionally, governments must take steps to ensure that legislation enacted for their purposes during their time in power not be used for other purposes by future governments. An example of this occurred during the recent bank crisis, when the UK Government froze assets of an Icelandic bank using measures contained in the Anti-Terrorism, Crime and Security Act 2001 [16]. This move was damaging to international relations and was certainly not what the authors of the law had envisaged while creating the legislation. Although there is always a possibility of something like this occurring, the opportunity to do so must be kept to a minimum.

For these reasons and more, on this occasion, the UK’s legislative procedure returned the best result possible, and the House of Lords, although much maligned for its lack of reform, carried out its duty of scrutinising legislation, holding the Government accountable and, ultimately, rejecting proposals not in the best interest of the UK and its citizens. This time they got it right.