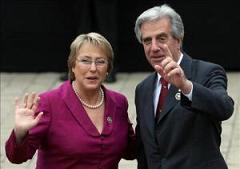 Chile and Uruguay will kick off a new round of elections in Latin America at the end of the year. Will there be a shift towards the center or will the left reassert its dominance? How will the electoral results in these two countries influence the rest of the Latin American elections?

(From Montevideo) URUGUAY’S NATIONAL ELECTIONS, which will take place in October, will mark the beginning of a new string of elections in Latin America. Indeed, they will be followed a month later by elections in Chile, and many others countries in the region will hold their own in 2010 and 2011.

This new round of elections will be characterized by a significant change in the region’s economic situation. The previous round “The troubling data regarding the performance of the Mexican and Brazilian economies will spread to the rest of the continent”–which began with the Argentinean presidential elections in 2003 and came to an end in May 2008 with the elections in Paraguay– took place during a very positive economic time period, characterized by strong growth throughout the entire region, together with a very significant increase in the international price of the region’s principal exports, low levels of inflation and decreasing unemployment.

However, this new period of government transition is going to take place within the framework of a profound global crisis, which is beginning to affect the Latin American continent to a great degree.

A CRISIS OF ENORMOUS MAGNITUDE

Indeed, all available information indicates that the impact of the global economic crisis, whose magnitude still cannot be appreciated in its entirety, “The region will face a tough economic situation, uniformly negative” will be strongly felt in the economies of the Latin American countries. Negative social consequences, such as unemployment and a decrease in the quality of life in many social sectors, will result.

The data regarding the performance of the Mexican and Brazilian economies are already troubling, and this trend will certainly spread to the rest of the continent, with either greater or lesser force. It is true that this crisis finds our continent better prepared than on prior occasions, and that the epicenter of the turbulent economic storm is located in the developed world, but it is no less certain that the global economy is more interrelated than ever, and that it is a crisis of enormous magnitude.

“The electoral period between 2003 and 2007 was characterized by a strong predominance of leftist political ideas” As such, in the Social Forum hosted by Brazil, the tone of the discourse coming from several Latin American leaders comes off –at the very least– as very naïve, characterized by a certain touch of euphoria and brought to life by apocalyptic prophecies regarding the capitalist economic order, as if their respective countries were not part of the system.

And so the region will – and indeed, it has already begun to – face a tough economic situation, with its intensity varying according to the responses proposed and put into practice by each country. But it will be a uniformly negative situation. This new string of elections will take place in these circumstances.

THE SHIFT TO THE LEFT

The electoral period between 2003 and 2007 was characterized, as it is well-known, “The global economic situation is not helping the parties in power get reelected” by a strong predominance of leftist political ideas and, in general terms it could be stated that, politically, Latin America shifted to the left like never before.

However, the generic label of these leftist governments aside, they have put forth very heterogeneous proposals, varying as much as the governments of Chile and Venezuela: the two countries whose ideological ideas, political positions and decisions regarding concrete public policies are the furthest apart.

At the other end of the spectrum, we could group together the Chilean, Uruguayan and Brazilian governments, closer to a leftist conception similar to the social democratic European model. They have a more orthodox economic policy open to the market, do not question the models of representative democracy, and have better relations with the developed world, without limitations on political or social pluralism.

And so, the most important political question mark is whether the left will reassert its dominance in the region in this new round of elections or if, on the contrary, the citizens of Latin America will change the way that they vote. And in the case of an ideological shift, the next question, which is just as important as the previous one, consists of establishing what the characteristics of the new government configurations will be. “Up until now, there have not been any strong options or defined proposals that would allow for us to dream of new political players capable of substituting the political groups currently in power”

In this sense, the global economic situation is not helping the parties currently in power get reelected. It is obvious that when the economic situation becomes adverse, the people tend to show their discomfort by looking for political change – even if the ruling government is not directly responsible

Nonetheless, the economic changes are just beginning to be felt, and it is known that it takes some time for their effects to spill over into the social world. As such, the current circumstances will not necessarily have an immediate effect on the electorate’s mood.

The ruling parties, being leftist, will try to get across that the current crisis is precisely the result of the application of rightist models and policies in the developed world. In contrast, the responses emerging from the developed world’s governments –with their big emphasis on protectionism– could be used as a strong argument in favor of the position taken by the rulers of Latin America’s left.

At any rate, a change in the region that would put political forces outside of the current leftist governments in power also depends on the ability of those challenging parties and candidates to create alternatives. Up until now, in many Latin American countries, there have not been any strong options, important candidates or, above all, defined proposals that would allow for us to dream of new political players (whether they be centrist or rightist) capable of substituting the political groups currently in power, or with the ability to usher in a new political era in the region.

THE FIRST TESTS: CHILE AND URUGUAY

However, in the case of the two countries that will kick off the new string of elections, Chile and Uruguay, there is visible uncertainty as to what kind of results we will be looking at when the end of the year rolls around. Both countries present some similarities, which makes their respective decisions more important. Chile and Uruguay are governed by parties or coalitions that, without a doubt, are located in the most moderate wing of the region’s leftist governments.

“The strength of the party system has allowed for the rise of strong alternatives capable of challenging the parties in power” Indeed, both the Concert of Parties for Democracy (the Concertación [1]) [1] in Chile and the Broad Front [2] in Uruguay are examples of more social-democratic alternatives to the left in power, with the Concertación being the stronger of the two. On the other hand, these are countries that have performed very well economically in the past few years. They are also the two countries with the strongest signs of a democratic political culture in their respective societies. What’s more, they have strong, solid political parties that have demonstrated that they are very capable of exercising political representation.

Perhaps the main difference is that, while in Chile the Concertación will be going for its fifth consecutive triumph, completing two decades of uninterrupted power, in Uruguay the Broad Front will have only recently completed its first five-year term in power. In that sense, the Concertación is showing some loud and clear signs that it is growing weak and is worn out, which do not appear to be successfully balanced out by its extensive governing experience. In turn, the Broad Front in Uruguay, which is not in a state of deterioration, nevertheless does not seem to be dealing with the difficulties inherent in government succession very efficiently, and it has lost some public support.

In both cases, and perhaps unlike the other countries in the region, the strength of the party system has allowed for the rise of strong alternatives capable of challenging the ruling government. In Chile, Sebastián Piñera [3]‘s candidacy, with the support of the old rightist parties National Renewal [4] and the UDI [5], and in Uruguay, the National Party [6], with Jorge Larrañaga [7] and Luis Alberto Lacalle [8] as possible candidates, are alternatives with enough vitality to effectively compete in the electoral battle at the end of this year. It is more difficult to predict how the respective governments will be characterized in the event that they are triumphant.

In short, we are looking at the beginning of a new round of elections in Latin America , of which the first two will take place at the end of this year in countries with similar characteristics. In both cases, uncertainty regarding the results is the main thing standing out in their respective political scenes, which makes the elections even more exciting.

What is unavoidable is that their results will have an important effect on the continent’s apparent political climate, and on the elections in the other countries in the region that will follow.