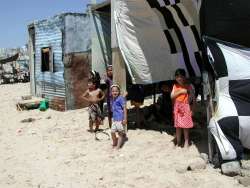 Although an outrage against the Israeli offensive in Gaza was sweeping the globe, fear of the Jewish State and its dependable American ally has kept the international community from laying down the law. In the author’s view, the world lacks strong political leaders capable of rising to the occasion.

(From London) THE GAZA STRIP has a population of 1.4 million people, and after 15-day-old Israeli offensive there, it had already resulted in 820 Palestinian causalities; meanwhile, only 13 Israelis had been killed so far. The offensive has caused extensive damage throughout the tiny strip, fueling fears of a humanitarian crisis in the process. The United Nations estimates that two-thirds of Gaza’s people were without electricity, and half didnn’t have running water.

The United Nations Security Council recently passed a resolution [1] calling for an immediate and durable ceasefire leading to the withdrawal of Israeli troops from Gaza. As expected, the United States abstained from voting on the measure. In any case, the United Nations can not be expected to play a meaningful role in resolving the crisis, as it has largely been discredited as a result of its failure to get its own resolutions implemented on the ground in the past. Israeli leaders have pressed on with their offensive despite said U.N. Security Council resolution and Egyptian-European efforts to mediate. The Israeli government claimed to be intent on stopping Hamas’ rocket fire into Israel, while Hamas was accusing Israel of perpetrating a holocaust, and continued to fire more rockets into the country. Hamas’ leader in exile, Khaled Meshaal [2], had said that the Islamist group would only consider a truce if Israel were to halt its offensive, pull out all of its troops and open the coastal enclave’s border crossings.

A VIOLATION OF INTERNATIONAL HUMANITARIAN LAW

The Bush administration alone has the power to stop the Israelis, but it will not do so, and is in fact supportive of Israeli aggression in Gaza. “HRW, a leading human rights group, accused Israel of using white phosphorus munitions during its offensive in the Gaza Strip” Were it not for tacit American backing, the Israelis would never have committed this latest act of aggression against the Palestinians in the first place. And their military response has been disproportionate, with Israel certainly being in breach of the laws of war. Israel should adhere to the international regulations enshrined in the Geneva Conventions [3], specifically regarding:

Proportionality: No more force should be used than that which is necessary, and casualties should be kept to a minimum. The response should be in proportion to the level of the threat.

Targets: Only military targets should be attacked; indiscriminate bombing is forbidden.

Civilians: Civilians should not become victims of war, and they have the right to be protected and have their safety ensured. Medicine, food and clothing should be allowed through.

Children: Children are not to be treated as combatants.

Weapons: White phosphorus should not be used as a weapon of war in civilian areas.

“Israel has created the largest concentration camp in the world. It is inhumane, illegal and worthy of world condemnation” Regarding the last point, Israel has argued that there is nothing to stop the chemical from being used as a smokescreen, and Human Rights Watch (HRW), a leading human rights group, accused Israel of using white phosphorus munitions during its offensive in the Gaza Strip, and warned of the risk to Palestinian civilians living near the fighting. HRW said that its members stationed in Israel observed multiple air-bursts of artillery-fired white phosphorus near the city of Gaza and the Jabalya refugee camp on January 9 and 10, and that Israel appeared to be using the munitions to make smoke screens to cover up military operations-a permissible use in principle under international humanitarian law. However, the organization maintains that the practice should be discontinued in Gaza’s densely populated areas.

To be fair, Hamas’ firing of rockets into civilian areas is also a violation of the rules of war. The question is: who started this in the first place? The truth is that it was Israel who occupied Arab homeland through military force, and not the other way around. And now, in Gaza, Israel has created –for all intents and purposes– the largest concentration camp in the world. It is inhumane, illegal and worthy of world condemnation. Unfortunately, Israeli and American Zionist propaganda would like to have us believe otherwise.

AN INTERNATIONAL COMMUNITY TOO SCARED TO ACT

“Israel was carved out of Arab homelands by European and American Zionists, with the full backing of the American and British leadership of the time. Israel then went on to expand its territory with the blessings of these two world powers” The current Israeli leadership, emboldened by the lack of any meaningful opposition to its military aggression in Gaza, is not expected to abide by international agreements and law. The problem is that no state is standing up to Israel, Muslim countries included. Not even Iran is taking any action against Israel. This is a result of fear of the Jewish State and its perennial backer: the United States. The little diplomatic activity on the international scene has not resulted in anything concrete in the way of stopping the war because of the American factor. In all truth, the United States is largely responsible for Israel’s crimes against the Palestinians because the Israelis can rely on American support for all of their actions taken against the Palestinians in the name of national security. This has been going on for over sixty years now.

The history of Israel must be recounted in order to fully understand the present crisis in the region. In the first few years after World War II, Israel was carved out of Arab homelands by European and American Zionists, with the full backing of the American and British leadership of the time. Israel then went on to expand its territory with the blessings of these two world powers.

Muslims are as angry as ever, as it is due to their own weakness that they cannot stop the Israeli aggression against their Palestinian brothers. “Ordinary citizens can be mobilized and galvanized into the creation of a new protest movement” The Islamic world is fragmented because it is ruled by tin pot dictatorships and inept, weak and corrupt elites. The Muslim world’s first order of business should be to get its own act together, because its present leadership is too weak and fearful to take any meaningful action. Still, all hope is not lost, as a general awakening in the Muslim populace can be witnessed today. The Muslim reaction to Israeli aggression is heartening in some ways, as Muslims in droves are now standing up for justice in Palestine.

And the Muslims are not alone, as an outrage against Israeli aggression is currently sweeping the globe. Still, the war will only stop when Israel agrees to an independent and secure Palestine. Unfortunately, anxiety has gripped the world’s leadership, preventing any action from taking place. A serious problem is the lack of statesmen today: there is a dearth of strong leaders capable of rising to the occasion and taking the necessary action. Maybe United States president-elect Barack Obama will be able to do it, but for the time being, we cannot count on governments to act, due to their weaknesses.

A GLOBAL, PUBLIC MOVEMENT FOR PEACE

The movement’s aim should be to establish peace, justice, equality and fairness in Palestine-Israel. Resolute action steeped in global education is necessary to achieve these goals, since the message of peace has to reach the far corners of the globe and be convincing. Eventually, the critical mass –or tipping point– will be reached, after which the world will never again be the same. This cannot be limited to a Middle Eastern movement, because the key to its success lies in it being spread around the globe. It will certainly be a challenge, but it is now possible due to the Net and sites such as Safe Democracy. We just need to steadily march forward, and convert one person at a time.

With the Muslims leading the way, we must strive to make a better world for the Palestinians. Can their brotherly sentiments be harnessed into a global movement that matters? It is up to them to spearhead this global movement for peace and justice in Palestine. The world owes it to the Palestinians, as they have been wronged by history. Until peace is brought to Palestine, there will be no peace in the Middle East. And this is extremely dangerous, because the region is one giant tinder box, just waiting for that fateful spark that could engulf the entire world in flames.