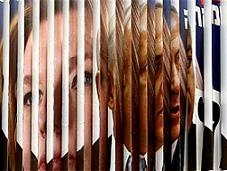 With the two-state solution all but dead, a bi-national democracy considered national suicide, and a political left in disarray, Israelis are becoming attracted to fatalism and embracing extremist ideology normally unheard of in Western style democracies. Read on to discover why.

(From Harashim, Israel) IT HAS BEEN YEARS SINCE observers could comfortably identify in which direction Israeli political party leaders believed they could lead the population of Israel. But even if the proposed directions were not completely spelled out, it is clear that, at least since the Hebron Mosque massacre [1] perpetrated by Baruch Goldstein [2] in March 1994, and the assassination of Yitzhak Rabin [3] a year and a half later, the political center in Israel has been steadily moving to the right.

Leading the way are right wing political groups that make radical declarations that go far beyond what one might expect to hear in an enlightened democracy. Statements that up until not long ago would have been regarded as extremist sayings only made beyond the pale are today acceptable and considered to be within the national consensus. Still, the results of the elections of February 2009 jolted many older Israelis, and became especially shocking when people realized that, for all intents and purposes, the respectable left-wing movement had been decimated. What is happening to us?, many wondered.

“Fatalism has grown in popularity in tandem with the gradual realization that there are no signs that the century-long conflict with the Palestinians will come to an end in the foreseeable future” Much of the radical right’s campaign focused on the dangers that put the security of Israel and its people in jeopardy. Although this strategy might have garnered it more votes at the ballot boxes, these threats, and the manner in which they were marketed to the public, do not seem to have influenced the average Israeli’s way of life. Most carry on with their daily work, enjoying the material benefits and vibrant social life around them. Visitors to Tel Aviv and the numerous commercial and industrial zones surrounding the city, from Natanya to Ashdod, are impressed by how the country is thriving in spite the current global recession. Bars and restaurants, lecture halls and museums, theaters and concert halls – they are all almost full. Although when they occur, terrorist atrocities are repeatedly broadcast on the radio and shown on television at some length, it is evident that these events which, along with Operation Cast Lead, affected the whole of the Gaza Strip in January, do not seem to have an impact on the average individual, who continues to pursue his or her own personal interests.

So how has a population that in the past regarded itself as progressively liberal and enlightened chosen to vote further to the right and reach out to groups that until recently were regarded as fringe radicals, but will now most likely become part of Israel’s next coalition government? There are several explanations, and they all include elements of fatalism, an ideology that has grown in popularity in tandem with the gradual realization reached in recent years that there are no signs that the century-long conflict with the Palestinians will come to an end in the foreseeable future. Why has this apathy evolved?

The most prevalent of the suggestions for peace voiced during the past generation revolved around the call for two countries for two nations. Although the two-state solution was supported by many left wing and centrist Israelis, it has become apparent that it is no longer a viable option. “The settlement plan of the last forty years has squashed any hopes that the two-state solution could be implemented, and a bi-national democracy is considered national suicide” Even those who favored it in the past have lately concluded that such a plan can no longer be regarded as a plausible solution. There are still some politicians, including the outgoing Prime Minister Ehud Olmert and Foreign Minister Tzipi Livni, who have indeed declared that for an acceptable accommodation with the Palestinians to take place, it is essential that Israel vacate some territories. However, it is unlikely that handing most of the West Bank over to a proposed Palestinian State is or would be within their realm of power, or the power of any political party, for that matter, even if it is in order to achieve peace.

Whether the plan for two countries for two nations, with a border along what was accepted as the 1949 Armistice Line (the Green Line), and as called for in Security Council Resolution 242, could have been implemented in the aftermath of the Six Day War or not is now a moot point. It is quite clear that the spread of the several hundred settlements in the following forty years has squashed any hopes that the majority of Israelis would agree to being removed, even for the sake of peace. And indeed, it is evident that any such solution that would require the uprooting of many, if not all, of the settlers. This is simply not doable, and any attempt to implement the plan would lead to bloodbaths and fratricide in Israel.

In theory, there is an alternative: the creation of a bi-national democracy in all of the land to the west of Jordan, in which the whole Jewish and Palestinian populations live together as equal citizens. However, it is quite clear that most Israelis will not even begin to consider such a possibility. Clearly, carrying out such a task would require resolving a series of complex matters, not the least of which would be the Israelis abandoning their perception of living in a Jewish State. Yet even today, with a quarter of the population of Israel non-Jewish -and the number on the rise-, one might ask whether Israel can really be defined as a Jewish State. “Leaders of the now defunct left wing parties failed to provide assurance that they could provide more convincing alternative policies”

In an age of demographic changes, in which the Arabs living to the west of Jordan may very well become the majority soon, a serious question arises: how will the security of the soon-to-be minority Jewish people be ensured? And there are many other wrinkles that need to be ironed out, ranging from ensuring equitable education to all, to apportioning the national physical resources equitably, both matters that will have to be resolved if the endeavor of creating a bi-national state is undertaken.

Without even paying serious attention to the idea, many Israelis are convinced that moving towards such a nation would be the equivalent of committing national suicide, and refuse to even begin considering it. And yet, rather than disavowing it in advance, if this could bring about real, sustainable peace, would it not be wise to weigh it as an option? Unfortunately, at present there is no Jewish political party willing to put the matter on their agenda.

It would appear that the majority of Israelis have accepted as fact that they cannot expect to achieve peace in their time. It is therefore understandable that many have chosen a political leadership whose main message, in view of the long-term confrontation with the Arab Muslim foes expected to drag on, is: maintaining a militant posture to ensure Israel’s security is essential. In recent years, leaders of the now defunct left wing parties, apparently in total disarray, failed to provide assurance that they could provide more convincing alternative policies.

This explains why it may be expected that in the coming years, Israel’s political leaders will emerge from the radical right.