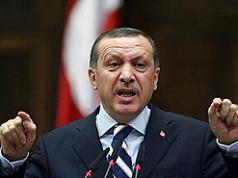 Learn why Turkey could finally enter the European Union in 2013. What role with the oil coming from the Caspian Sea and Russia play?

(Madrid) ALTHOUGH TURKEY WILL be in compliance with all of the necessary requirements for admittance into the European Union by 2013, we do not know if the community’s member states will be ready to take us in, Ali Babacan [1], Turkey’s Foreign Minister, stated. He did not hesitate to warn the 27 that three or four years from now, Turkey will be a very different country…

Different, yes. At the end of 2008, the government in Ankara set in motion an ambitious four-year plan to give the Ottoman country a face-lift, adapting nearly all of its socio-economic parameters to the community’s demands. It is an attempt to complete the plan of economic reforms initiated by the social democrat Bülent Ecavit [2]‘s cabinet and continued by Recep Tayyip Erdogan [3]‘s Justice and Development Party (AKP [4]). “The EU External Relations Council warned the Turkish authorities that it was necessary to urgently normalize relations with Cyprus”

But the reform project has been neglected since 2007, when the Eurocrats decided to punish Turkey for refusing to open its seaports and airports to Cypriot planes and ships, which was interpreted in the Commission’s offices as a flagrant violation of the current rules of free trade.

It is worth remembering, in this context, that since 2005 –when negotiations regarding the Ottoman country’s admittance as a full member to the EU began– only 13 of the 35 chapters of the chapters of the acquis [5] have been opened. The others remained blocked, due to threats from the community’s member states. Only a few weeks ago, the EU External Relations Council warned the Turkish authorities that it was necessary to urgently normalize relations with Cyprus, a member state whose admittance into Brussels’ club caused many headaches in the Commission.

THE FACTORS HOLDING BACK SOCIAL REFORM

In turn, the Turks are of the opinion that the Cypriot question is no more than a mere pretext being employed by its principal Old Continent detractors –France, Germany and the Netherlands– in an attempt to prolong the negotiation process. “Nowadays, Turkey’s inhabitants admit the errors of, and assume the responsibility for, the vindictive nationalism of the beginning of the twentieth century”

One of the pretexts, although not the only one. According to the EU Expansion Commissioner, Oli Rhein, the country’s shortcomings in the areas of freedom of expression and religious freedom, without forgetting – as it is very visible – the thorny Kurd question, only add to the long list of complaints and recriminations.

Nonetheless, the perception of Turkish politicians and intellectuals is diametrically opposite theirs. According to Seyla Benhabib, professor of political science and philosophy at Yale, the changes brought about in the last decade have led to a quasi-anarchic type of freedom, which both facilitates the -up until now- forbidden debate on the republic’s past and an open analysis of options for the future. Indeed, nowadays, Turkey’s inhabitants admit the errors of, and assume the responsibility for, the vindictive nationalism of the beginning of the twentieth century, which led to the massacre of the Armenians living on Ottoman land during the First World War. “For the great majority of Turkish intellectuals, soldiers, just like public officials, judges, lawyers and teachers, belong to the guardians of the Constitution“The problem that now arises does not consist of knowing whether said massacre truly took place, but of studying extremely carefully and objectively the reason for the crime, which official silence covered up for nearly an entire century.

An interesting detail is that Turkish intellectuals have stopped branding the army a simple escape valve for nationalistic authoritarianism. Nowadays, they have a different perception. For the great majority, soldiers, just like public officials, judges, lawyers and teachers, make up a part of the complex fabric of guardians of the Constitution.

Benhabib believes that industrialists, small merchants and farmers join the old elite in forming the AKP’s activist base. The war among said elites, the distinct social classes’ undeniable identity conflict and the fight against the myths of old nationalism are factors holding back the campaign of social reforms initiated in the 1990s.

AN EXAMPLE OF TURKISH PARTICULARITY

In parallel to the Turks’ multiple identity crises, the Old Continent, in turn, has to face up to a series of contradictions, ranging from the rejection of the European constitution in countries like France, the Netherlands and Ireland, to the fear -yes, fear- of Turkey’s economic potential. “There are some who believe that Turkey’s integration into the EU would serve as an example for other Muslim countries, encouraging the desired democratic process”

Truth be told, it is worth pointing out that free trade would hurt the Turks and the current member states the same. Spain, Greece and Italy would compete with the Turks in the agricultural market. This could spark a crisis in the farming sector that would provoke an exodus of Turkish farmers and, as a consequence, an increase in the flow of migrants to Europe.

But there are other advantages that the Europeans are quick to remember. One is the role of mediator in the Near East region that Turkey has played for quite some time. In addition to the secret contact between Syrians and Israelis, realized through the Turkish embassies, there are its extremely discrete contacts with the fundamentalist organization Hamas, both desired and endorsed by Israeli politicians.

Furthermore, there are some who believe that Turkey’s integration into the EU would serve as an example for other Muslim countries, encouraging the desired democratic process.

THE IMPORTANCE OF THE ENERGY OPTION

Last but not least is the role that Ankara plays when it comes to guaranteeing the security of Europe’s energy supply.

Turkey’s stability is, at this time, the main asset of the exporters of black gold coming from the Caspian Sea, although also from… Russia.

And although the Europeans don’t like to mention its energy security, it is no less certain that, if they abandon Eurocentric hypocrisy, they can recognize the importance of the so-called Turkish option. A word to the wise…