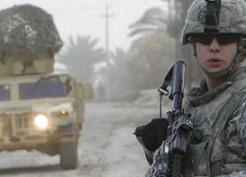 The success of Obama’s plan to finally bring the troops home from Iraq will depend upon his ability to negotiate the stabilization of the Arab country after the military exit with Iran and its ally Syria. It is a high-risk, but very courageous, decision.

(From Buenos Aires) FOR MANY OF THE NEW AMERICAN administration’s officials, the war in Iraq is all but over, and barring an unforeseen dramatic event like 9/11, its final day has been unilaterally set as August 31, 2010. An outline of the plan has already been drawn up, and subsequently taken form in President Barack Obama’s speech.

Without a doubt, the average reader will be very happy to learn that there will be one less war. Even so, we should not forget that former president Bush also declared mission accomplished after overthrowing Sadam Hussein in 2003. Indeed, just like Bush once did, President Obama has declared an end to the military operation in Iraq. On December 31, 2011, the nearly 150,000 troops stationed in the country will complete the final withdrawal.

A HIGH-RISK, BUT VERY COURAGEOUS, DECISION

A few days ago, President Obama made an official announcement regarding the United States’ pullout from Iraq, and set the definitive date on which the Iraqi government will take charge of its institutions and security. In order to understand the consequences of said measure, it is necessary to look at the subsequent reactions of the Iranian and Syrian regimes, as well as the reactions of Al Qaeda and its jihadist sister groups. Still, we cannot lose sight of how and when this definitive withdrawal plan could affect Europe and the United States itself. According to Washington, after August 2010, the American troops’ mission will be to train, equip and advise the Iraqi security forces [1], while also supporting civil protection operations and, fundamentally, reconstruction and political reconciliation in Iraq.

At first glance, the plan appears to be solid and logical, and in line with one of the United States’ primary strategies: Maintaining the political position in which (according to President Obama) the political-institutional Iraqi process progresses until it can guarantee the country’s security.

REVIEWING THE CURRENT SITUATION COULD BE ENLIGHTENING

“Believing that these groups will stop attacking would be both naive and dangerously suicidal – just look at the present situation, as well as the ideas and actions of the jihadists over the past few years”

Within this framework, the American public in general, and Congress in particular, should understand that in order for the next phase to be successful, Iraq must be able to withstand the future – and in my opinion, certain – pressure from its enemies, the Islamic Republic of Iran, Syria and Al Qaeda, who have their own plans for when the American withdrawal is completed. But if the terrorist forces combating the Coalition and the Iraqi government disappear as soon as the United States leaves Iraq, the withdrawal plan will be an indisputable success. Nevertheless, when evaluating any post-withdrawal strategic scenario, we must think and ask ourselves the following questions: What will happen if the other side does not cooperate? And if Al Qaeda and its armed Salafist bands, like the Pasdaran [2], the Al-Quds force, Hezbollah and the Iranian and Syrian intelligence agencies, decide on something else?

The fact of the matter is that on August 31, 2010, Iraq’s own forces will have to be capable of controlling and protecting their country. The role of the United States will be reduced to supporting the Iraqi armed forces in their fight against jihadist insurgency – that is, if the problem persists.

“It should be expected that, far from decreasing, the level of violent and aggressive acts against the Iraqi institutions and population will increase after the American withdrawal, and the violence will drag on for quite some time” As I see it, believing that these groups will stop attacking would be both naive and dangerously suicidal. Just look at the present situation, as well as the ideas and actions of the jihadists over the past few years – there is no reason to feel encouraged. The most logical thing would be to expect that the jihadists step up their tactical-military efforts in light of the American retreat.

In any case, predicting what the terrorist groups plan to do in Iraq is a very complicated task. The easiest way to anticipate the actions of radical groups like Al Qaeda and its jihadist satellites is to review their messages, speeches and statements, as well as the ground operations carried out daily by their kamikazes. Everything indicates that these groups will continue with their attacks and even raise the ante, regardless of what Washington or the fragile Iraqi institutions plan for. The Salafist groups that form the Sunni triangle [3] have made statements that practically mock the American withdrawal. They can be found on various jihadist web pages, from those maintained in Pakistan to those in Indonesia, and even in Gaza, confirming that they will pursue Allah’s will, and that it will prevail when they do away with the new Iraq’s apostate government and establish the caliphate sha’ria, which they are currently pushing for. As such, it should be expected that, far from decreasing, the level of violent and aggressive acts against the Iraqi institutions and population will increase after the American withdrawal, and the violence will drag on for quite some time.

The jihadists have an extremely secure corridor of access to Iraq via the Syrian border, and also have the support of Saudi Arabian ideological and financial societies at their disposal. As such, the success of President Obama’s plan will depend upon his administration’s ability to put an end to and stop the flow of jihadism between the two parties. Predicting how Iran will react and behave after the American withdrawal is much more complex. The current political elite in Washington gladly proclaims that realism will prevail in Tehran as soon as the Obama administration sits down at the negotiation table with the Mullah regime. The new American administration is convinced that the plan to withdraw from Iraq will gain the support of Iran, and that Tehran will cooperate and Iraq will be able to control its eastern border in spite of the influence of pro-Iranian groups. “In a certain sense, the success of Obama’s plan will depend on the United States’ ability to dissuade Iran and its ally Syria from destroying Iraq after its exit”

If Obama’s advisors are right, it will be an precedented success after more than thirty years of a rocky relationship between the Islamic Revolution and Washington. If they are mistaken, it will be disastrous for the region, for Israel, for the West, and of course, for the United States.

Up until this point, we have seen Iran take several opportunities to sit down and talk with the UN, the EU and Mohamed El-Baradei of the International Atomic Energy Agency [4], and even listen to them sometimes. Nevertheless, at the same time it has continued with its plans and ground operations in order to reach its goals. What have those goals been? To infiltrate and penetrate Iraq, taking advantage of the influence of the Shiite majority of the Iraqi population in both Baghdad and Basora, even with the presence of American and British troops. There is nothing to make us think that after the American withdrawal they are going to halt their attempts to use all of the power at their disposal: special groups, the Sheik Mukhtada Al-Sadr’s Mahdi army, assassins, government infiltration, etc. As such, in a certain sense, the success of Obama’s plan will depend on the United States’ ability to dissuade Iran and its ally Syria from destroying Iraq after its exit.

In reality, the 2010 plan is a challenge; it could be successful, but that will depend upon an important regional issue. Obama’s plan could work if his government manages to dissuade Tehran and Damascus from filling – with jihadists – the vacuum in Iraq. And herein lies the secret to the gradual withdrawal plan: the president has to choose something to offer in return to the Iranian Mullahs, if peace and calm is what he wants. What will Obama offer Iran in exchange for it abandoning its regional expansionist strategy and nuclear ambitions. It is an enigma shrouded in mystery, and it is difficult to propose an answer while taking into account Iran’s intentions and actions since President Ahmadinejad rose to power four years ago. Due to this, achieving peace and strengthened democratic institutions in the short term is practically a chimera.

The worst possible scenario in Iraq would be that the number of American troops decreases and that the final withdrawal in 2011 makes it easy for Iran and Syria to – directly or indirectly – take control of Iraqi territory.

To conclude, I would say that it’s all in President Obama’s hands. If he has a global plan against Islamist terrorism, his future and most important partner in the region, the recently elected Benjamin Netanyahu (and also Shimon Peres) is anxious to hear about it. The Israeli leadership knows very well that much is at stake if it goes along with the American president’s plans regarding the nuclear threat to their country. According to recent statements from the Iranian regime’s military command, the country’s missiles can now reach Israeli nuclear plants. Today … Iran has missiles with the range of 2,000 kilometers (1,250 miles), and based on that, all Israeli land, including that regime’s nuclear facilities, are in the range of our missile capabilities, the commander Mohammad Ali Jafari stated in Arabic to the web portal Al Jazzera on March 3 [5], information that has been confirmed by Reuters journalists Zahra Hosseinian and Edmund Blair.

In any case, if President Obama has success with his 2010 plan, it will be a big step towards a victory in the war of ideas, and a marvelous time for Iraqi democracy. But, if after some time passes we see that the efforts of the American administration have been focused exclusively on dodging a confrontation with the jihadists, the announcement and execution of the plan will be nothing more than the beginning of a humiliating retreat, with extremely dangerous consequences.