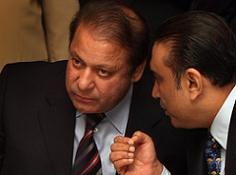 In light of the multiple threats to Pakistan, it is time for national reconciliation and mutual toleration among the various political parties.

(From Islamabad) THIS FEBRUARY 25, Pakistan’s president, Asif Zardari [1], made a power grab by dismissing the Punjab legislature and introducing federal executive rule. The president’s actions came after the Supreme Court disqualified the Sharif brothers from holding elective office. Former prime minister Nawaz [2] is the current opposition leader, and at the time of the court’s ruling his younger brother Shahbaz [3] was the chief minister of Punjab, the most populous and politically significant of Pakistan’s four provinces, and an area where the Sharif brothers have long wielded power. The threat of a mass protest was averted when, early on March 16, the Pakistani government agreed to reinstate Iftikhar Chaudhry [4], the former chief justice of the Supreme Court, along with other judges. This was widely seen as a spectacular victory for Nawaz, who had been leading the mass protest for their reinstatement.

“The decision to restore the chief justice came about as a result of international pressure on Zardari from several quarters, with Saudi Arabia also supposedly playing a role”The concession came during a time of deepening political crisis, with the dispute between President Zardari and Nawaz Sharif escalating and threatening to destabilize Pakistan. What’s more, the country was already under a great deal of pressure due to a growing Islamic insurgency and acute economic troubles.

President General Pervez Musharraf [5] had dismissed Chaudhry on March 9, 2007, apparently because he believed that the judge would prevent him from running for a third term. As chief justice, Chaudhry was considered independent-minded, and was widely honored last year by universities and bar associations in the United States. At one point, he even asked the Musharraf government to bring intelligence officials to his court to explain the disappearances of hundreds of Pakistanis, who were widely believed to have been held without charges since the beginning of the American-led global war on terror in 2001.

PRESSURE FROM ALL SIDES

The decision to restore the chief justice ultimately came about as a result of international pressure on President Zardari from several quarters, “It was Nawaz Sharif who ultimately led the unprecedented protest movement, and his tough stance on the issue is what made the general public really take a liking to him” including the United States, the UK and Pakistan’s own army chief General Kayani [6], to defuse the political crisis, with close friend Saudi Arabia also supposedly playing a role. The March 16th decision was very popular in the country, as in the public’s eyes it was a triumph for democracy, and it was widely believed that Pakistan could only progress with an independent judiciary. In the end, the government finally realized it too, albeit a little late.

For over two years, the valiant lawyers’ movement was the chief agitator for Chaudhry’s restoration, but they was also largely supported by Pakistan’s nascent civil society, academia, and media, as well as some political parties, like Tehrik-i Insaaf and the Jamaat-i Islami. Yet it was Nawaz Sharif who ultimately led the unprecedented protest movement, and his tough stance on the issue is what made the general public really take a liking to him. He gained a lot of political mileage as a result of the eventual reinstatement, and this is to his credit.

Ever since Nawaz Sharif returned to Pakistani politics in late 2007 after having been in exile, “The Zardari government can now address the country’s critical needs” haudhry, as a symbol of an independent judiciary, had been the focus of his party’s platform. Sharif and Zardari led a coalition government just last year, but the two fought over the future of Chaudhry until it fell apart in September, with Sharif maintaining that Zardari’s refusal to reinstate the chief justice, despite promises, had forced his party to pull out of the coalition. Sharif had accused Zardari of refusing to reinstate the judge because he feared that Chaudhry would repeal an amnesty that had been granted to him and his wife, former Prime Minister Benazir Bhutto, concerning corruption charges.

Thus, the reinstatement of the top judiciary has defused a dangerous confrontation within Pakistan, and the Zardari government can now address the country’s critical needs. Chaudhry will now take his seat in the Supreme Court on March 21, as Abdul Hameed Dogar [7], appointed chief justice by then President Musharraf and subsequently favored by current President Zardari, is set to retire on March 20.

A LACK OF PRESIDENTIAL STATESMANSHIP

President Zardari’s popularity has plummeted as a result of these recent incidents, with Prime Minister Yusaf Raza Gilani gaining in popularity at his expense. “Zardari has failed to exhibit the statesmanship required to steer the country out of the multiple crises in which it is currently mired” To his credit, the prime minister had been calling for the reinstatement of the Sharif government in Punjab and had supported the reinstatement of the judiciary as well, even though he might have taken a soft line on the latter. Zardari had been adamant all along that Chaudhry was not acceptable to him, and it is widely believed that he had been misled by some of his advisors, such as Rehman Malik, who is in charge of national security, and even Salman Taseer, the governor of Punjab, a Pakistan Peoples Party [8] (PPP) nominee and a senior administration member. Nonetheless, as the most powerful man in the country, the responsibility ultimately rested on Zardari’s shoulders, and it was tremendous public pressure that eventually forced him to concede on March 16.

Although Pakistan is technically a parliamentary democracy, for all intents and purposes it functions as a presidential system, with Zardari the head of the Pakistan Peoples Party, the largest political party in the country, and the one with the most representation in the country’s parliament. It is the ruling party in three of the four provinces, and it is even a junior coalition member of the provincial government in Punjab. Yet Zardari has failed to exhibit the statesmanship required to steer the country out of the multiple crises in which it is currently mired. He is simply not up to the task, as he does not have enough experience or ability to lead Pakistan at this crucial time. It would be better for the country if he were replaced by a more experienced member of his party. Indeed the PPP has several promising candidates capable of being trusted to handle the state’s affairs in a better fashion. Hopefully, he will be replaced soon enough and, as indicated recently by the prime minister, the Sharif government will be immediately restored to power in Punjab.

Pakistan is in a mess and needs strong leadership to straighten out the numerous fault lines threatening the country’s future. If it is to avoid a deepening political and economic crisis, the office of the president must definitely be in more capable hands that the current incumbent. It would be better for the country and the region as a whole if Asif Zardari were to resign.

Nawaz Sharif must focus on Punjab and carry out his duties as the leader of the opposition. The PPP’s mandate to rule Pakistan for another four years or so must be respected, because the country can no longer afford a lingering political crisis. In light of the multiple threats to the country, it is time for national reconciliation and mutual toleration and peace among the various political parties. The first step would be for the prime minister to reassert his constitutional authority and lead the country as expected. Pakistan must return to its original 1973 constitution, and restore the parliamentary government. A restructuring of the federation would also be welcome, and the four provinces should be given more autonomy. However, for all of this to happen, Pakistan must first attain political stability.