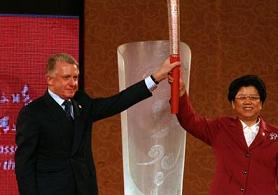 Xulio Rí­os explains how the passing of the Torch to Beijing for the 2008 Olympics has created enormous tension between China and Taiwan. Not even sports are capable of pacifying the complicated relationship between Beijing and Taipei.

ON APRIL 26th, the Chinese Government announced the official route of the Olympic Torch for the 2008 Beijing Olympics [1]. According to the authorities, the Torch would pass from Vietnam to Taiwan, and would continue on to Hong Kong, Macao, Hainan, Guangdong.

For Beijing officials, it was important that the torch pass through Taiwan as a symbol of Chinese ownership of the province. The agreement between the two Olympic Committees was reached on April 18th, after a delegation led by the Vice-President of the Chinese Olympic Committee, Hu Jiayan, met in Taipei with the President of the Taipei Olympic Committee, Tsai Chen-wei. The agreement centered around one major point: if the Olympic torch were going to travel through Taipei, it would have to come from a sovereign state, and then continue on through Hong Kong, Macao.

THE ISSUE OF STATUS
But it now appears that the agreement has fallen apart: the Taiwanese Athletic Authorities are demanding that the torch not only arrive at the island from a sovereign nation, but that it continue on to a third country other than continental China. In this manner, Taiwan hopes to emphasize its status as a sovereign and independent state. The Olympic Torch, a symbol of world unity and cooperation, has transformed itself into an issue of extreme tension between Beijing and Taipei.

Many believe that Chen Ming-tong, the current president of the Mainland Affairs Council [2] (MAC) had a hand in breaking the agreement. Chen Ming-tong is very close to Chen Shui-bian and is a promoter of the concept of the Second Republic of the Taiwanese PDP party. It is thought that he may be using the issue of the Torch to influence the upcoming legislative and Presidential elections in Taiwan (to be held in December and March) as well as the outcome of the PDP’s proposed referendum.

KMT VERSUS PDP
Hau Lung-bin, mayor of Taipei, gave his approval to the proposed trajectory of the Torch, while other governmental authorities expressed their concern that it minimizes the sovereignty of Taiwan. The KMT, meanwhile, insists that sports be separated from politics, although it does not appear easy. In the ranks of the governing PDP, the ex-Prime Minster Frank Hsieh criticized his successor (and rival in the internal primaries), Su Tseng-chang, for not having assured the participation of Taiwanese athletes in the upcoming Olympic games.

Liu Te-hsun, speaker of the Ministry of Continental Affairs, reiterated that Taiwan is an independent athletic entity, and that it should be called Chinese Taipei, as it has been called for years in the few international forums in which it participates, and not Taipei China, as it is referred to in Beijing. Taiwan is a member of the COI [3] and demands the respect of Olympic protocols. According to Liu, there was no agreement to include Taiwan in the route of the Torch, and such an arrangement will only be made if it does not endanger the sovereignty of the island.

PRE-DISPUTE
The controversy began when Lien Chan, honorary President of the KMT, visited the continent and participated in a new Bilateral Forum held by the PCCh and the KMT on April 29th. The forum involved the participation of thirty KMT deputies as well as a large committee of business executives. During the proceedings, the continental authorities announced the new policies to promote bilateral relations, especially in regards to tourism, communication, and transportation, as well as education and youth exchange.

After sixty years of confrontation, 2005 marked the beginning of what is known as the third cooperation between the two sides. Lien Chan was received by Hu Jintao for the third time since these talks began.

Reaching an agreement will not be easy, especially with the focus of Taiwanese officials on the upcoming elections. The Olympic Torch seems to have provided an opportunity for Taiwanese politicians to distinguish between the collaborationism of the KMT and the resolve of the PDP. We find ourselves, therefore, in the preliminary weeks of a dispute that may last for a long time and produce an uncertain result. Not even sports are capable of pacifying the complicated relationship between Beijing and Taipei.