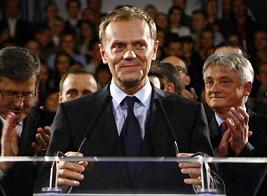 The electoral results received in have transformed the political landscape of the country: the defeat of the conflicting Kaczynski brothers, and the failure of the radical parties has restored to the Polish people true optimism. Among, the first measures of the administration of Donald Tusk is the announcement of the retreat by 2008 of the 1,200 Polish soldiers stationed in Iraq, the adoption of the Euro in 2012, and the signing of the Charter of Fundamental Rights of the EU.

THE POLLS PREDICTED A TIE BETWEEN the two major political parties: The Catholic, right-wing Law and Justice [1] (LJ) and the moderate party, Civic Movement (CM). But, the volatile character of the Polish electorate and the surge of voter participation during the final days leading up to the election subtracted credibility from any prediction.

It appears that the televised debate between the now ex-Prime Minister, Jaroslaw Kaczynski [2], and the former leader of the principal party of the opposition, Donald Tusk [3], was the final push that persuaded many indecisive voters at the last moment to vote for the moderate option represented by the Civic Movement.

Kacyznski did not know how to benefit from the achievements of his administration, centered in a notable increase of macroeconomic sums, and he lacked arguments to refute Tusk when he claimed that the government had not completed any of its electoral promises, such as: fighting against corruption, the promotion of protected housing, and the reorganization of health care, among others.

It is necessary to emphasize in this occasion voter-turn out, which has surpassed 53 percent, and entails the highest level since those that the caused the fall of the communist regime in 1989.

THE DEFEATED: SAMOOBRONA AND THE LEAGUE OF POLISH FAMILIES

“In the past years, politics in have been characterized by permanent conflict, and everyone fighting against one another”

Perhaps the most telling fact is the debacle of Samoobrona [4], and the League of Polish Families [5], which have not yet achieved seats in Parliament. Their unalterable trajectory as allies of the LJ currently in power have caused them to be punished by the Polish citizens, who as of the moment have clipped the wings of these two radical and populist groups, whose aggressive discourse and intolerance have caught on far too much in the past months. The possible implication of the leader of Samoobrona, Andrzej Lepper, in a corruption scandal uncovered this past summer has without a doubt influenced the results.

Also, it is necessary to stress the support given to Tusk on behalf of the youth, especially those who voted for the first time, and the Poles who lately have emigrated to other countries of the European Union, especially .

Interest is now centered on the formation of the new administration, which will likely pass an agreement with the Polish Farmers´ Party, a small party which in its day was governed by the ex-communists. Of a conservative character with regards to questions of morals and religion, the PFP defends an economic policy in which the state must assume the role of a protector of the citizenship, especially of the 18 percent of the population which inhabits rural zones, and is employed in the primary sector.

“The possible stumbling blocks for the future government’s work will be centered on the economic program, already the CM promotes a liberal model, which could collide with the statist vision of the PFP”

To judge what has occurred in the past years, one can say that the field of politics in has been characterized by permanent conflict, and everyone fighting against one another, with safe specific moments in which the coincidental joining of interests brought a fragile and brief consensus between the parties.

Even so, it is possible that the CM and the PFP will agree to a governmental pact, due especially to the margin of votes which the former receives, and the heroic popularity which is obtained by the latter, (outshone in the past years by the sudden ascent of the extremist Samoobrona, also centered in the rural electorate).

The possible stumbling blocks for an imminent agreement regarding the future work of the government will be centered on the economic program, already the CM promotes a clearly liberal model, which could collide with the aforementioned statist vision of the PFP. But, luckily for the winners of these elections, the possibility that their political adversaries will join forces against the new office is null, since the Kacynzkis have never collaborated with the ex-communists, which they harassed non-stop during the last legislature.

The following large obstacle for the inbound government is the Polish president, Lech Kaczynski [6], who will remain as the head of government until 2010.

He will be able to utilize his right to veto over the decisions of Parliament, which can override said veto with a backing of three fifths of the Lower House. It is necessary to point out that the sum of the delegates from Civic Movement and of the Polish Farmers´ Party does not reach this number of seats, which means they will need the support of the ex-communists in the case of a presidential veto.

Even so, in these days, one breathes with a sense of true optimism, which succeeds a repugnance provoked by the climate of confrontation created on behalf of the Kaczynski’s party in the past two years.

Among the first measures of the Tusk administration are, the announcement of the retreat by 2008 of the 1,200 Polish soldiers stationed in , the adoption of the Euro in 2012, and the signing of the Charter of Fundamental Rights of the EU included in the Treatise of the European Union recently agreed upon in .

Certainly such actions represent a revolution of the foreign policies of , and surely it will be in this field where the principle changes will be appreciated.