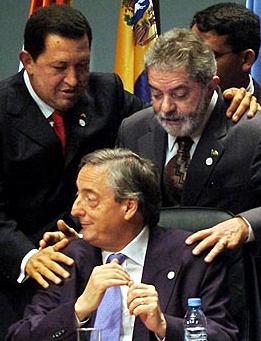 The rejection of certain models that are not conducive to integration, overcoming the idea that ideological affinities like We can do it, decreasing the democratic deficit and carefully assimilating the potential of : the story of the work that should be done to resolve the Mercosur crisis in order to escape stagnation.

DURING THE GREAT CONFERENCE that took place in on August 30th, noted Brazilian sociologist Helio Jaguaribe affirmed: the regional integration of Mercosur depends on basic conditions: the operational consolidation of the Argentina- Brazil alliance (that is more verbal that is operational) and the recognition of the necessities of , that is the weak sector of Mercosur.

When asked about the lack of coordination between the macroeconomic policies of the group, Jaguaribe answered: The priorities of the policies many times are the internal problems, the electoral perspectives, and also the great forces that are not moving toward integration.

The current affairs of Mercosur demonstrate that the relationships, at first glace, are able to share in the ideological terms of governments in the sub region that do not contribute much to the effectiveness of the group.

The critical view the Brazilian sociologist contrasts with that euphoria that has been demonstrated by certain political actors of Mercosur. One example of this insubstantial optimistic rhetoric is repeated from May 7th of this year, when the Parliament of Mercosur (PM) was put into place.

The conviction expressed by the principle speakers on the day of the inauguration of the PM,representing the institution ́s community, said they would like to overcome the democratic deficit of the group, forcing a critical reading coinciding with the basic reflections of Jaguaribe.

The task of revising the wording of the speeches the day the PM is put into place, shows a exaggerated sign of optimism that does not coincide with the small prospects for the trajectory of the group.

For example, Celso Amorim, Minister of Foreign Relations for , affirms that the inauguration of the PM demonstrates the political maturity of Mercosur and adds that the integration of is a major priority of the Brazilian government and Mercosur is the motor of this integration.

Robert Conde, an Uruguayan legislator and Vice President of the Executive Board of the PM, affirms that many say that this Parliament is something symbolic, then yes, it symbolizes the spirit of our libertarians to achieve the second and definitive national independence. He also received applause when paraphrasing the Uruguayan writer Eduardo Galeano, asserting that the installation of the PM, is the basis for definitively closing the open passages of .

These declarations are far from contributing to the positive transformation that is required for the subregional group, to have a Mercosur that remains successful while human aspirations are still unrealized.

In this context, results pertinent to listing the quantity of weaknesses of the group should be quickly corrected otherwise the effects can twist the trajectory, despite the ideological affinities between the government and the region, that do not call up absolutely the enthusiasm.

1. The indispensable result to reject the plan of the three models of integration that are judged. In the first place, Mercosur was strictly commercial during the 90s which has been demonstrated by the clash of economic interests with the States, the absence of international safeguards and political mechanisms of coordination driving ineffectively to make unilateral decisions that consequently paralyze the group.

In the second place, the two-speed Mercosur, is one of an outline of integration that is excluded from the Argentina-Brazil bilateralism, that does not take into consideration those on the outside that suffer, the smaller partners of the group, Paraguay and Uruguay. Finally, aforementioned by Uruguayan political scientist Gerardo Caetano, Mercosur should not avoid fleeing from the problem in front of them, that is to say there is expansion without examining the problem indepth, that being the incorporation of Venezuela as a good example.

There is an urgent need for greater effective participation by actors of the civil society to be able to have a say in daily government of Mercosur.

2. The vision should be improved to support the ideological affinities to all that can be reached. The present situation of Mercosur demonstrates the relationships, at first glance can be shared in ideological terms by governments of the subregion that do not contribute much to the effective advancement of the group.

One example of this could be having presidents call for polls to gauge public approval ratings. Sometimes leaders may times loose sight of the objectives of integration and get bogged down in unjustifiable bilateral conflicts, like the paper factories of Fray Bentos. In this sense, the political confrontation in nationalistic code (like how the president of Uruguay Tabaré Vázquez ordered that military forces watch over the Finnish wastepaper basket Botnia) or the (bringing to trial) external recording by a part of Argentina (a negotiation of whichever possibilities are available to overcome the internal crisis institutional structure of Mercosur), with clear examples of a way to handle foreign relations while still watching domestic politics.

“In short, trying to avoid a rushed expansion with little clarity driving toward the political breaking point of the group”3. There should be a serious focus on the improving the democratic deficits of Mercosur. If a good debut of the PM results undoubtedly in the way behind the institutionalization of the group, there still persists dynamics that do not contribute to anything to provide improved legitimacy to the decision making process. In this direction, the interpresidential logic (this is the idea that the leaders have advanced from the group since the consensus to reach the presidential peak) that permitted the rapid advance of Mercosur in commercial terms at the beginning of the 90s, has actually become and obstacle for the transparency of the decision making process. There is an urgent need to return to more effective participation of actors of the civil society to call for democratic opportunities and a greater say in the everyday governing of Mercosur.

4. Finally, the first point surrounding Mercosur and fleeing the problem, is the recent incorporation of as a full member,which should be a motive for attentive reflection. A good result is evident with the grouṕ¨s incorporation of and certain benefits (the third PIB of the region, and one of the main potential oil reserves on the planet and a new financial pole of the region), adding to a country with positions, few coinciding with the interests of the group. The confronted profile of Caracas (not only with the United States but other counties of South America like Peru), the implication of internal affairs of countries, few that have seen the strategic interests of the group (Iran, Iraq, Belarus ) and certain initiatives totally incompatible with healthy integration of the block. In short, trying to avoid a rushed expansion with little clarity driving toward the political breaking point of the group.

In summary, if these four points are resolved properly and paid attention to by the architects of the subregional group, there could be the promised future which we wait for. The mentioned deficiencies could be corrected and the ideological affinities that seem as though they can not be reached to guarantee the good course of the group, could be converted in the plus necessary for successful integration.