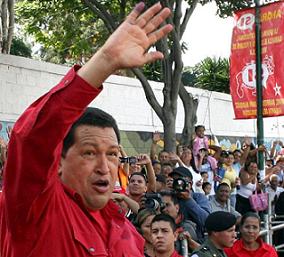 The hard-fought result of the referendum for the constitutional reform that President Hugo Chávez attempted to push through, evidence for the fact that continues to be polarized into two sides without accepting any middle ground, with the social and political consequences that this entails. The triumph of the No is the Venezuelan society’s rejection of another Putin, and apart from that provides the leaderless political opposition, which now has no excuse to not get organized with an opportunity.

TO LABEL THE ELECTORAL RESULT in the defeat of Chávez or the triumph of the opposition is to fall into a questionable generalization and simplification of the complex Venezuelan political process.

There are various interpretations that can initially be drawn from what occurred in the South American country where, in the midst of much tension and many national and international expectations, the constitutional reform project was subjected to a referendum.

“It would not be anything of a novelty if, in view of the lessons and political consequences that the popular referendum’s result implies, President Chávez were to tighten the nuts and bolts of his camp”

The fact that the electoral result has been so hard-fought: No (50.70 per cent) versus Yes (49.29 per cent) from a total of 8,883,746 valid votes, once more lends evidence to the notion that remains polarized. All of this with the social and political consequences that a country divided in two, in which the respective sides do not accept any subtle shades of meaning in regards to the situations that occur there, entails.

One of this tendency’s greatest manifestations was the revocative referendum to which the president of the Republic was subjected in August of 2004, when the scales were tipped in the Venezuelan Chief of Staff’s favor (59 per cent of the votes versus 40 per cent), who now, following the unsuccessful reform process, finds the new phase of the denominated Bolivarian revolution and his 21st century socialism restricted.

“What has occurred does not signify the end of Chávez’s mandate, but it does signify a surprising reverse in his long chain of electoral triumphs since 1998”

It is this limitation that the government, as well as the sectors of the Venezuelan opposition, should pay attention to. For the moment, the South American leader’s moderate discourse, which recognizes the electoral results, is, at least in form, letting his affection for civic will be seen. However, it would not be anything of a novelty if, in view of the lessons and political consequences that the popular (with plebiscite overtones) referendum’s result implies, President Chávez, the sole leader of the revolution, were to tighten the nuts and bolts of his camp.

The leader’s words: I would not have wanted that victory will resound in the ears of those around Chavez’s, since his electorate’s costly mobilization did not yield favorable results for the process. These words also imply a warning to those who oppose him.

In turn, the leaderless, heterogeneous and not always organized opposition should understand very clearly that the Venezuelan government has a political project to carry out, and that this electoral stumble only means that it will search for a way to complete it within the established terms of office. Not in vain, the president reminded the country about the phrase for now, which he had said to the public when he was detained during the attempted coup that he led in 1992, and which made an impression on the Venezuelan people as a whole. What has occurred does not signify the end of Chávez’s mandate, but it does signify a surprising reverse in his long chain of electoral triumphs since 1998.

CIVIC APATHY AND THE AWAKENING OF THE YOUTH

Another aspect of significant importance is the value of the vote. Although the abstention was elevated in accordance with the official data from the National Electoral Council (CNE in its Spanish initials), which estimated the figure at 44.11%, the weak intention to vote, which the questionnaires and opinion polls were reporting up to less than a month ago, worried the political leadership. The final electoral processes, above all the election to form the National Assembly, showed the electoral apathy that still has a hold on many citizens.

“The lack of adequate clarifications caused the national and international discussions about the constitutional reform project to focus on one single article regarding the indefinite reelection of the national leader, and not on the tentative violation of Fundamental Rights”

Nevertheless, in an indisputable gesture of civic-mindedness, the Venezuelan electorate (approximately 16 million of 26 million citizens) took on their mistrust of the digitalized electoral system and went to the ballot boxes. However, it is naïve to think that the shadows surrounding the CNE have dissipated, and that a lot work had to be done along the way for the electoral body to make the victory of No official.

One of the reasons for the change of attitude in the collective Venezuelan conscience was embodied by a group of young students from various universities across the country, who woke up from their lethargy a few months ago and have assumed the indisputable leading role in the conduction of civil society, setting themselves apart, at least in form, from the normal politicking, and from some of the opposition’s leaders’ attempts to use the student fight for their own benefit.

NO EXCUSE TO NOT GET ORGANIZED

Here is where it is pertinent to establish some differences, given that people tend to lump all opposition to Chávez together without taking into account any nuances. Now the opposition has run out of excuses to not get organized.

On the other hand, and related to what was previously mentioned, it could also be an apt time to make a call for national reconciliation.

It was the lack of adequate clarifications and spokespeople that, in part, caused the national and international discussions about the constitutional reform project, even for many analysts, to focus on one single article regarding the indefinite reelection of the national leader (out of a total of 69 articles subject to the reform), and not on the tentative violation of Fundamental Rights, such as the right to due process and access to information, which some of the articles regarding the States of Emergency implicated.

Some other matters that were no less important were the Central Bank of ’s loss of autonomy and the president’s absolute powers.

Venezuelan society, for the time being, has refused to have another Vladimir Putin.