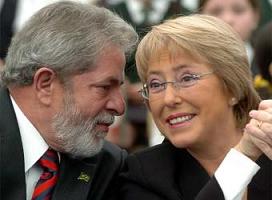 For the benefit of all of its citizens, should leave behind the ideas of regressive utopias, and that of the cold war confrontation, in order to search for and take the path which is neither leftist nor rightist, but rather centrist. Progress and modernity are not in the extremes; in reality, they never were.

(From ) IN VIEW OF GLOBALIZATION, and in general, of the changes of the last few decades, three attitudes have emerged from the region’s political left: the possibilitists, who resign themselves to the changes; the deniers, who don’t want to see the new reality; and thirdly, those that take on this reality in order to try to find and invent paths that lead to a different society.

“The left has historically been preoccupied with how to distribute wealth, but not with how it is created. The right has discovered how to generate wealth, but it always says that it is not time to distribute”Many leftist leaders have joined the movement for liquidation of the multilateralism that the international organisms represent, beginning with the United Nations, the World Bank and the International Monetary Fund, as they proclaim in their anti-globalization speeches.

It is obvious that many of these institutions are outdated, even with respect to the principles that inspired their foundation. Thus, they need to change. But many sectors of the Latin American left do not take into account that the international community, and how it runs today, could not create these organizations nowadays if they did not already exist.

HOW TO COMPATIBILIZE GROWTH AND REDISTRIBUTION

The left has historically been preoccupied with how wealth is redistributed, but it has never been preoccupied with how it is created. The orthodox and militant discourse says that there is wealth for all, but that it ends up being poorly distributed. And so the discourse ends with the wealth distribution being equalized by channeling more of it from the top to the bottom. In the process, the wealth is squandered until we arrive at misery, without thinking about how to actually generate it. As the ex-prime minister of , Olof Palme said, it is not worrisome that there are rich people; what is worrisome are the poor people, whose quality of life must be elevated.

“Centrality in the face of regressive extremes is vital in order to have models of sustainability, credibility, and reliability to satisfy our societies”

The left of the sixties is not distributing the fruits of the well-cultivated tree. It is distributing the tree in pieces, and it doesn’t have fruits to be distributed anymore, just like what happened in .

The lesson of failed true socialism is clear: if liberty is sacrificed in the name of equality, in the end equality is also lost because the bureaucracy in charge of the State without any democratic controls ends up exploiting the population and using the state for its own benefit.

The right holds the opposite position. It has discovered the way to generate wealth, but it always says that it is not time to distribute.

Because of this, centrality in the face of regressive extremes like that of the Venezuelan president Hugo Chávez, who mashes together Marxism, populism, religion, and oil (among other things), is vital in order to have necessary models of sustainability, credibility, and reliability to construct a model that satisfies our societies.

Both confrontational political styles and extreme polarization can be harmful for democracy because they demonize any stance that does not coincide with that of the government.

LET THE CAT CATCH THE MOUSE, REGARDLESS OF ITS COLOR

In general, States are not good administrators or businessmen. Their role is not to generate wealth, but instead to make predictable countries follow clear and lasting rules, which allows for private investment to generate employment and wealth. If this did not happen there would be nothing to redistribute.

“National consensuses that allow the political power to create clear rules for businessmen and investors are necessary. State policies are necessary since the rules cannot simply be erased so as to start anew from ground zero every four or five years”

The left tends to focus squarely on the instruments while losing sight of the objectives, instead of being loyal to the objectives and flexible with regards to the utilization of the instruments. Remaining static appears to be one of the untouchable icons of this conservative left.

However, public firms often sustain themselves with voracious taxes and disproportionate budgets, which do not resolve the citizens’ problems. What we need, as the former president of the Spanish government Felipe González reminded us a few weeks ago in Uruguay, is for the cat to catch the mouse, regardless of its color. As the socialist ex-president explained, physical integration by means of highways, ports and infrastructures does much more for the citizens than fiery caudillist and state-ist speeches, typical of many nineteenth century Latin American governments. Private companies and investment are vital for development.

Pasqual Maragall, the Spanish socialist ex-president of autonomous Catalonia who also paid a brief visit to Montevideo, reminded everyone that after the crisis of the German social democrats, the French socialists, the decadence of the Scandinavian socialists, and the resounding failure of the communists, the time was ripe for the construction of a new experiment that would contribute to changing the political geography: the European Democratic Party.

In Maragall’s opinion, it too should be centrist; it should be progressive and left-center in face of the challenges that confront the countries and citizens immersed in the great political and economic power centers.

Today national consensuses that allow the political power to create clear rules of the game for businessmen and investors are necessary. State policies are necessary since, with the ascension of a new government every four of five years due to the alternating nature of democracy, the rules cannot simply be erased so as to start anew from ground zero.

Progressive projects are only possible if they are successfully inserted into a globalized world, according to the ex-secretary general of the Uruguayan Socialist Party, Manuel Laguarda.

Foreign investment is vital for the countries of . Globalization is not reversible, but it is ideal for the construction of new scenarios with alliances between countries and blocs, and among States, the private company and the civil society as a whole. This is a unique opportunity for to finally leave its tragic past behind and subscribe to modernity, not with the help of a Messiah, but instead with rationality and by taking the path in the middle.

The businessman is a fundamental player in the economy and sometimes plays a more critically representative role than the very person in charge of the nation-state insofar as its insertion into the global economy.

History will show which political leaders were able to rise to the challenge and not waste precious time for growth, while focusing on reducing poverty and inequality, and creating employment.