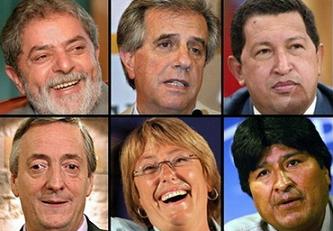 Is Latin America divided into two models, as maintains it is? For the author, it is actually diversity and heterogeneity that prevail. Paradoxically, in the forest of the distinct situations that exist today in Latin America, the success stories (, , and ) are those that make less noise and receive less attention.

(From Santiago de Chile) THE WAY IN WHICH THE LATEST IBERIAN-AMERICAN SUMMIT in Santiago de Chile ended obscured the diversity that exists today in Latin America, in terms of both political and economic proposals.

Indeed for a long time, and above all in Europe, analysts and the media presented a type of bipolarity that never really existed: on the one hand the supporters of globalization, amongst whom Chile and Colombia were named, and then those against it, headed by Hugo Chavez’s Venezuela.

“The truth is that the current situation in the Latin American region is that there are relatively successful governments that receive less attention perhaps because they have not tried to become models” However, it was never so simple, given that several globally integrated processes were headed by the moderate left, whether it be in Chile, Uruguay or Brazil. By the same token, Kirchner’s Argentina and the Bolivarian experience were very different from each other, as from Correa’s Ecuador. This means that populism has its own distinct varieties and tonalities. Even the Bolivian condition, which obviously has its influences and shares both the ideas and the polarization of Venezuela, seems to be one which goes from bottom-to-top (the indigenous demand), and not the other way around. Finally, we should add those countries whose markets are driven by the right, but with an identifiable social emphasis, as is the case with Uribe’s Colombia and Calderon’s Mexico.

This means that it would be necessary to speak in situational terms, of diversity and heterogeneity in the region, more than of the simplicity of the two models. Above all, the interest in Hugo Chavez’s media tree, including his recent defeat in the referendum, should not hide the forest of distinct species that exist today in Latin America, in which those that make less noise seem to be more successful than the others.

In other words, it is not good to speak in black and white terms, but instead to speak of distinct colors and alternatives that go far beyond Chavez and ALBA [1] on one hand, and on the other hand, beyond the globalizers.

Keeping proportions the same, at least for analytic effects, what is occurring now is possibly reminiscent of what happened during the Cold War, in which for many there were only two camps. However, today it is understood that, just as the ex-Soviet countries took different paths, in the other camp what was presented as a single model really had differences, given that Anglo-Saxon capitalism was and is different from the European or Japanese models.

“Today there is confusion as to why Chile is growing below its potential and below other Latin American economies” The truth is that the current situation in the Latin American region is that there are relatively successful governments that receive less attention perhaps because they have not tried to become models.

The case that is generally referred to is that of Chile, above all for its successes in economic growth and reduction of poverty, and in a series of indicators that, from institutional strengthening to low levels of corruption bring it closer to developed countries. This image is based upon the great accords that consolidated a trauma-free transition, with the case of Pinochet being an exception. In turn, these agreements were based upon consensuses concerning vital State topics and foreign policy, and great commercial agreements with the European Union, the United States, South Korea and Japan, to which social topics like health and education have been added. All of the aforementioned is situated in the context of a very large compromise by the government which has remained in power since the return to democracy, and in a diagram in which all of the constitutional reforms have been made in accordance with the opposition.

However, as in the other facets of life, it is as difficult to remain on the summit as it is to climb to the top, and in Chile many doubts have arisen as to whether the country is truly advancing today. Better said, there is a sensation that things have stalled and that there is a lack of ideas for a second generation of very necessary economic and political reforms, in addition to strong criticism of the fact that the economic growth has not been accompanied by a more just distribution of the revenue. In fact, today there is confusion as to why the country is growing below its potential and below other Latin American economies, and why it has not been able to take advantage of the exceptional price of its principal export, copper.

THE CASES OF PERU AND COLOMBIA

Among the situations that should receive more attention is Peru’s, which in spite of all of its problems has continuously exhibited growth above 6 per cent for several years, is receiving an abundant amount of foreign investment, and despite the fall in popularity of Alan Garcia, seems to be headed down a more or less well-oriented path.

Of course, its social and political problems continue to loom very large, as does the lack of opportunities that continue to cause many citizens to emigrate. Nonetheless, it appears that the instability is being overcome, and the intention to compete with Chile in the southern part of the continent has been openly announced. In fact, a free trade agreement with the United States is close.

In turn, Colombia’s image, one of kidnappings, the guerrilla and narcotics trafficking, is very unjust given that despite prolonged problems that have destroyed other societies, it is without a doubt a democracy, a state based on the rule of law, and has recovered what distinguished it during the twentieth century, that is, one of the most stable economies of the region, without the crisis and recovery cycles of others. In fact, today Colombia’s economic situation is going through a good period, above all in terms of foreign investment.

This ability to prosper in spite of the noted difficulties should be a recognizable example and not grounds for criticism.

THE CASE OF BRAZIL… A FAMILIAR STORY?

But if we had to choose a country whose successes clearly stick out in the region, that country would be Brazil.

“Brazil acts more through its presence, and as such Brazilians themselves point out that they prefer the use of what is called soft power (meaning weak power) to the strength that comes directly from its resources, population and size” It is a Brazil that distances itself from Argentina thanks to its good results and greater stability, that is looking to acquire leadership at the global level, that is an important player in the Doha rounds of international commerce, and that is pursuing not only a permanent seat in the UN Security Council, but that is also establishing a type of united front with equivalent countries in other regions, such as India and South Africa.

Brazil is South America’s natural giant, as much in size as in population. Lula has a recognizable popularity, and has overcome internal party divisions, allegations of corruption that have implicated those around him and the failure to fulfill electoral promises of profound change.

Of course, its social and inequality problems continue to be enormous, but the bottom line is that today Brazil seems to be headed towards a healthy growth, it enjoys prestige in the world markets and is a center of investment on both the national and international levels, aside from possessing a large enough internal market as to allow it the luxury of not needing a free trade treaty with the United States. Culturally, the Brazilians have their own music, style of life, film, literature, and many other easily recognizable quality products that provide Brazil with its own base, distinguishable and recognizable among the world of nations.

The problem is that this appears to be a familiar story. Indeed, how many times have we heard that Brazil is about to take off and that it could become a world power? In fact, when George W. Bush visited Brazil, he offered it a kind of alliance based on the Brazilian success with ethanol and bio-combustibles, reminiscent of that period in the 1970s when Henry Kissinger and Richard Nixon offered it a special treaty, just like Brazil had at that time with the Iranian Shah and other countries; this is to say, a relationship different from the rest of the region’s.

Curiously, even under Lula, projects and even slogans like Brazil is strengthening that had not been heard since the military rule, as well as programs like the space and nuclear submarine ones, have reappeared. This is without including the influence that it would receive if the announcements of great reserves of hydrocarbons are confirmed and the estimates are transformed from possible to probable.

“A more determined Brazilian leadership would be useful for many countries, given that a region that is moving backwards in the scale of global power needs the first world to see a certain order in it, and not the disorganized cacophony that arises out of each summit” Therefore the question is a rigorous one, what does Brazil need today in order to effectively be a power?

In the first place, it needs to believe in the story itself. Brazil acts more through its presence, and as such Brazilians themselves point out that they prefer the use of what is called soft power (meaning weak power) to the strength that comes directly from its resources, population and size. The problem is that the search for leadership at the global level will be difficult if Brazil is not capable of exercising indisputable power in its surrounding area at the same time.

In this sense, Lula has lacked great decisiveness in confronting Hugo Chavez’s prominence, and as a country, a more adequate response to being the object of the geopolitical displacement in Bolivia on Venezuela’s part, above all because an important chunk of the gas that Sao Paolo needs to function and produce comes from there.

Brazil also needs to be more decisive in proclaiming that they have a program that seems to be producing results; this must be shown without any type of complex. In this sense, Brazil is not Chile in that the latter is a small country while the former is gigantic and borders the majority of the countries in South America.

Thirdly, if there is a natural leader in the region it is Brazil, and that influence should be transformed into a stabilizing power. This power would be a net profit for the region, given that in view of the fragmentation and diversity that currently exists, many countries would find it useful if the rest of the world had a reference to help identify the region.

In other words, a more determined Brazilian leadership would be useful for many countries, given that a region that is moving backwards in the scale of global power needs the first world to see a certain order in it, and not the disorganized cacophony that arises out of each summit, including the Iberian-American ones.

But for this to occur, Brazil needs some of what it has lacked: more decisiveness in proclaiming without complexes that it going through a good period.