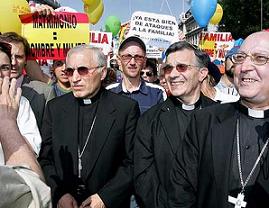 There are two unresolved matters in the Spanish democracy outside of the current situation that no government has managed to resolve since the Transition: the political aspirations of certain autonomous regions and the relationship between the Catholic Church and the . The first challenge is Spain’s territorial configuration, which continues to be questioned by a minority of the population that is by no means insignificant, capable of influencing, by means of its political representation (PNV and CiU), the Government; the second, the need to proclaim constitutional laicism in order to avoid religious interference in governmental affairs.

(From ) IN SPITE OF THE UNDENIABLE SOCIAL, political and economic progress that has made in the last 30 years, there are still extremely important obstacles to surmount that are hindering the peninsular association’s advancement, when not subjecting it to unnecessary tension, which the ideological extremes are already feeding off of.

Since the socialist Government headed by José Luis Rodríguez Zapatero [1]’s term is about to conclude, it is appropriate to reflect upon the Spanish democracy’s two unresolved matters. I am referring to challenges of great significance, and which for that are removed from the current political and economic situation.

The first one is, without a doubt, the one that affects the nature of the and the autonomous provinces of what have historically been considered nationalities, like , the Basque Country, and , although in this last region the concept of a distinguishing identity is much less exclusionary.

THE RIGHT TO SELF-GOVERNMENT, THE BEST ALIBI

Up until today, the successive central governments, the leftist as much as the rightist ones, have been incapable of making the outlying nationalist movements, not even the more moderate ones, feel comfortable within the Spanish union. “Even though the Constitution considers the unity of Spain to be indissoluble, there are separatist tendencies on the peninsula that are more and more noticeable, whose direct aim is a self-determination that the Spanish government completely rejects” The Spanish Socialist Workers’ Party (PSOE [2] in its Spanish initials), as well as the People’s Party (PP [3]), have had very unstable relations with the Basque Nationalist Party (PNV [4]) and Convergence and Union (Convergència i Unió, CiU [5]), nationalist organizations that hold the majority in their homelands and have known how to take their own share with their punctual support in the State Parliament, when one of the two big Spanish parties has not garnered sufficient votes to rule alone.

PNV and CiU have supported both the right and the left in Parliament, which indicates that moderate nationalist movements also resort to pragmatism when they consider that their political platform could be strengthened in the long run. And this platform is nothing other than making the possibility of deciding its future at the ballot box a reality, as the main leaders of the PNV and CiU declare time and again.

The right to full self-government in and the Basque Country, denied by the Chief Executive, has already turned into the best alibi, not only for moderate nationalism, but also for the typical dynamiters.

“There are many citizens that have a Spanish passport, but do not identify with Spain and what it symbolizes” Despite the fact that three democratic decades have already gone by, Spain’s territorial configuration continues to be questioned by a minority of the population, although the portion is not any less significant because it is a minority, given that it is located in two of the most developed regions in the country. Even though the Constitution considers the unity of Spain to be indissoluble (which was attempted to be made sacred in the Constitution for a reason, just like the monarchist regime inherited from the dictatorship was) there are separatist tendencies on the peninsula that are more and more noticeable, whose direct aim is a self-determination that the Spanish government completely rejects, conscience of the fact that it could be the first step towards the disintegration of an association that historically has never quite solidified.

SPANIARDS… BECAUSE OF THEIR PASSPORTS

This fear of disintegration prevails, despite the fact that there are more than enough legal checks to avoid the abuse of statistics, social fractures, and any type of minority imposition. “The non-believing nature that characterizes the current Spanish State has proven to be insufficient in restraining the leadership of a Church that is resistant to losing its ancestral privileges” Observing the right to self-determination as if it were anathema is one of the many signs of the immaturity of the Spanish democracy, which prefers to proclaim the indisputableness of the monarchy and the sacrosanct unity of the territory before going around the table and settling the differences and historical contradictions of a guild that in 500 years of ordinary travel has made many more errors (some of them monumental) than good choices. And there are reference materials to attest to this.

A sentiment of belonging to a tribe is indispensable in order to guarantee the fairly successful coexistence of any association. And there are many citizens that have a Spanish passport, but do not identify with and what it symbolizes.

“Spanish democracy’s current taboos are hindering the two big Iberian parties from overcoming the psychological barriers that separate the country from complete normalization” The State of Autonomous Regions (El Estado de las Autonomías), which artfully made historical nationalities such as Catalonia, the Basque Country and Galicia, and regions completely integrated with Spanish ideology without calling for emancipation, like Andalusia, equal, was decided upon by consensus during a rigged transition, in which all of the democratic parties, without exception, gave up some of their principles in order to avoid greater harm. Perhaps because of this it has shown itself to be insufficient after all of these years.

It seems appropriate, then, to make up a new model of the state, and to carry it out without prejudices while searching for the greatest possible consent between the involved parties. And all of the parties, without any being excluded, would have to participate in this great debate; but indispensable sectors of the civil society should also take part.

The new constitutional model that, sooner or later, will have to be negotiated must allow for a less traumatic relationship between the State and the Catholic Church, which is rocky today due to the bishops’ interference in earthly affairs, after President Rodríguez Zapatero passed some progressive laws, such as gay marriage and the acceleration of the proceedings to obtain a divorce.

The non-believing nature that characterizes the current has also proven to be insufficient in restraining the leadership of a Church that is resistant to losing its ancestral privileges. And because of this, many of us are convinced of the necessity of proclaiming constitutional laicism as the best way to avoid religious interference in the tasks of the political leaders. This reform also has to do with the urgent redefinition of the State, and represents a challenge for the society as a whole.

However, Spanish democracy’s current taboos are hindering the two big Iberian parties from overcoming the psychological barriers that separate the country from complete normalization. It is evident, and each passing day serves to affirm it, that ’s democratic transition was not as commendable as was proclaimed from the high ranks. It is probable that we are currently undergoing the catharsis that we saved ourselves the trouble of confronting in the seventies, with an exaggerated transition whose therapeutic effects could have an expiration date.