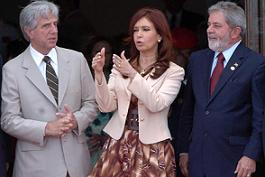 Mercosur still has two types of imbalances: structural (territory, population, infrastructures…) inbalances and public policy (fiscal matters, investment promotion exports) ones. The author believes that responding to these imbalances means implementing a genuine strategy for regional solidarity, which is not derived from dispersing charity among the poor but instead from the pragmatic necessity of greater benefits.

(From ) THE COUNTRIES THAT BACK INTEGRATION logically do so in search of added benefits that are greater than the costs that the process itself involves. However, there is no guarantee that these benefits will be split evenly among the partners, with the countries with the smallest economic possibilities also being those that have the smallest possibility of receiving the advantages and externalities caused by integration.

In view of this problem, dealing with the imbalances involves the construction of a genuine regional solidarity strategy, which does not involve charity but a pragmatic need. “The richest countries on the regional level are not the wealthiest ones worldwide” Despite the best intentions, this is a difficult obstacle to get rid of 16 years after the creation of the Mercosur bloc.

If we simplify, we can distinguish two types of imbalances: structural ones (related to territorial size, the size of the economies, wealth, infrastructure, etc.) and public policy ones (those related to fiscal incentives, programs promoting investments and exports, and preferential financing, monetary policy, etc.).

SALVATION FOR THE POOR

Even if it is true that these differences in market size provide unquestionable advantages to Brazil and Argentina in the integration process, we must also highlight that, unlike the European Union (where there is a correlation between size and wealth of the member countries, which has largely facilitated the implementation of cohesion policies) there is no such concordance in Mercosur’s case. If we observe the well-being statistics in the regional bloc, such as per capita consumption or the Human Development Index, it becomes evident that economic size does not have any correlation whatsoever with the wealth of each of the member states. Even though is the largest member economically, it is the second poorest country in the region, after .

“Structural differences exist not only among the countries, but also at an internal or sub-national level” This attempts to highlight the fact that the wealthiest countries on the regional level are not the wealthiest countries worldwide. In fact, Mercosur encompasses countries of low to middle income level, and as there is no correlation between size and wealth, or any national and regional disparities, this creates serious difficulty when it comes to devising policies to correct these imbalances. In this sense, a red light flashes when and look for a favorable endorsement within their countries to pay out large sums of money to help their neighbors and . Taking everything into account, we are dealing with a type of salvation for the poor. All serious regional politics of imbalance reduction should keep in mind this very limit, which is often ignored when it is time to analyze the problem.

Furthermore, structural differences exist not only among the countries, but also at an internal or sub-national level. For example, the per capita Index of Production of the wealthiest region (Patagonia) is almost five times greater than that of the poorest region (northeastern ). Nevertheless, only possesses 0,8 percent of the total population, whereas the Brazilian northeast is home to nearly a quarter of the inhabitants of Mercosur.

THE ROUTE TO CORRECT THE IMBALANCES, A PRIORITY

The need to adopt policies to correct the imbalances does not come from any ethical or altruistic reason (as INTAL [2] points out), but instead from the simple need to guarantee the partners that the benefits are greater than the costs. “It is interesting to point out that during the beginning of Mercosur’s creation, Uruguay and Paraguay did not insist on the inclusion of a special and differential treatment principle because they were afraid of being left out of the bilateral agreement between Argentina and Brazil” We are dealing with a merely pragmatic necessity and the consequences of not acting on the matter can come to fruition in the middle to long run, in view of the growing discontent between Paraguay and Uruguay. The eastern country’s insistence in their intention to sign a Free Trade Act with the is a demonstration of this.

Up until now, what has been done to correct the imbalances? Dealing with them has not always been a priority on the bloc’s agenda, and the topic’s political evolution has been in total synchrony with the dominant economic paradigms in the multilateral trade negotiation rounds.

During the new wave of Latin American integration, from the end of the 1980s and the beginning of the 1990s, dealing with the imbalances did not play a predominant role under the principal argument that the great benefit of the broadened market was much bigger for smaller countries than for larger ones. The broadening of the market itself was considered to be a principal instrument for development, in line with the conceptions of the Uruguay Rounds of the GATT [3].

Coupled with this interpretation, it is also interesting to point out that during the beginning of Mercosur’s creation, and did not insist on the inclusion of a special and differential treatment principle because they were afraid of being left out of the bilateral agreement between and (the ACE 14). “The most significant measure was Decision 03/27, which promoted the execution of studies for the creation of Structural Funds in Mercosur” Instead, and stressed more flexible conditions (especially longer terms) to achieve complete liberalization of intra-bloc commerce. As compensation, the rule of decision-making by consensus was established, in which the two smaller countries saw a way of counteracting their relatively lesser power in decision making capacity. In other words, they bartered: resignation of a preferential pact in exchange for a consensus rule.

Ever since 2003, there has been a change in the conception of the treatment of the imbalances in Mercosur that coincides with the change seen in the Doha Rounds (2001), in which the concepts of a special and differential deal and unbalanced reciprocity were taken up once again. As a turning point towards that direction, measures that were sensitive to the smaller advantages of and were taken for the first time at the 2003 Summit of Mercosur’s Heads of State, in .

Undoubtedly, the most significant measure was Decision 03/27, which promoted the execution of studies for the creation of Structural Funds in Mercosur, finally captured in the Focem (Funds for Mercosur’s Structural Convergence), and currently in motion. If FOCEM is a late first step towards either overcoming the imbalances or a political compensation in view of the discontent of the lesser partners (or maybe both), it is a question that deserves a separate analysis.

A CHALLENGE FOR CRISTINA

“We are dealing with a pragmatic for a true social and productive Mercosur in which the lesser partners have incentives to remain within the bloc” At the last summit of Mercosur’s Heads of State, held in December 2007 in Asunción, the launch of a Strategic Plan to Overcome the Imbalances was passed over. The plan had been proposed by two years before and should have been implemented by during their presidency pro tempore of the bloc. The matter is now in the hands of the Argentinean President, who is responsible for the challenge of completing the project in the first semester of time for its passage by the Common Market Council in July 2008.

Even though all of this might be a very ambitious endeavor, policymakers should not lose sight of two essential points that I will point out. In the first place, we are dealing with a pragmatic necessity that is more than beneficial for a true social and productive Mercosur in which the lesser partners have incentives to remain within the bloc.

Secondly, all strategy in the said direction should be conscious of its great limit: the condition of being developing countries that all members share, and the difficulty that this represents when it is time for the larger countries to help the smaller ones.